It was two years ago, at the end of the Jays home opener, that Kevin Moreira and Nikole Lusher met on a GO train platform. 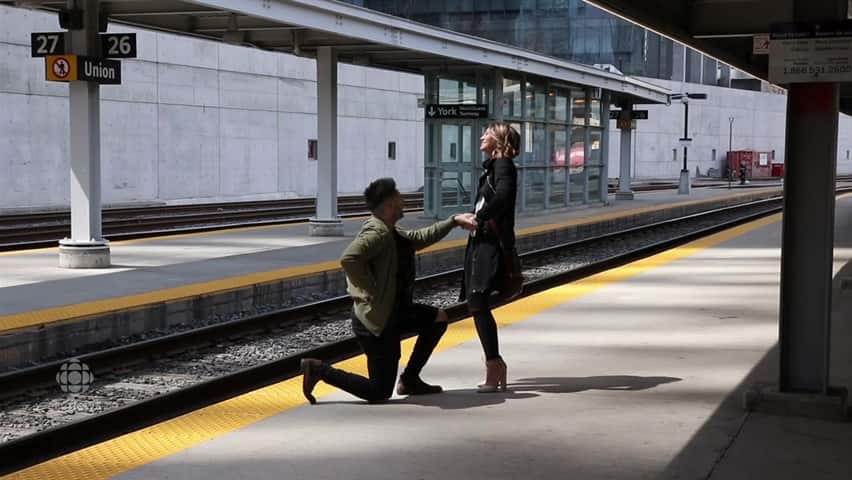 It was two years ago, at the end of the Jays home opener, that Kevin Moreira and Nikole Lusher met on a GO train platform.

It's a moment Lusher says she can't remember — but with the help of GO Transit and Metrolinx, Moreira made the spot memorable by proposing to her on the same platform in Union Station.

"I decided to come back to the spot where we met and make sure she doesn't forget it this time," Moreira told CBC Toronto with a laugh.

Lusher says she wasn't expecting the proposal, but was instead anticipating a dinner celebrating their anniversary.

"I didn't expect it at all. We're going to Spain next week, and figured if he's going to do it, he would do it there," she said.

Moreira thought his now fiancée might have a hunch that he was going to propose, and was relieved it all went off without a hitch.

"When I came up with the idea, I was like, 'This isn't going to fly,'" Moreria said. "Thank God it did, and thank God we're here today."

The excited couple is now looking forward to telling family and friends about their engagement over the Easter weekend before their big trip.

"It's amazing," Lusher said of the proposal. "I couldn't be happier."