Toronto Centre MPP Glen Murray, a former mayor of Winnipeg, has formally announced his intention to seek the leadership of the Ontario Liberal Party. 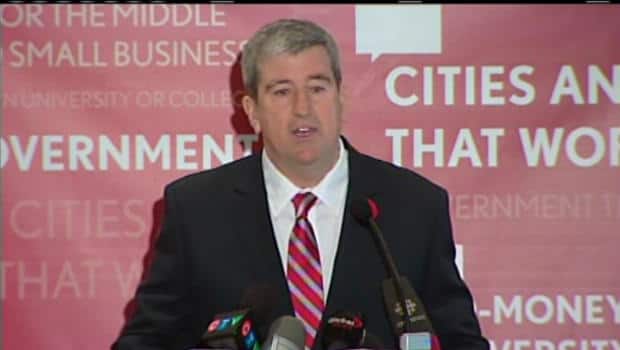 Toronto Centre MPP Glen Murray has become the first candidate to formally launch a campaign to become the next leader of the Ontario Liberal Party, telling supporters he wants to lead his party’s renewal process.

"I want to become the next premier of this province and I want to become leader of the Ontario Liberal Party," Murray said during a Sunday morning press conference at Toronto’s Maple Leaf Gardens.

Murray’s announcement came a day after he resigned his cabinet portfolio, a step Ontario Premier Dalton McGuinty has said is necessary for all cabinet ministers who are pursuing the leadership.

Two weeks ago, McGuinty announced he was leaving public office after nine years as premier and 16 years as party leader. He also prorogued the legislature and indicated his successor will determine when it is recalled.

The person who takes over his role as Liberal leader will inherit a minority government that could face a sudden election as soon as the legislature resumes.

For that reason, Murray, 55, said it is necessary for the Liberals to choose a leader who is ready for anything.

"This race is about picking someone who has a clear agenda and a premier who is ready, if forced, to take the Liberals into an election and win another mandate," Murray said.

The two-term Liberal MPP outlined a five-point renewal plan he said he would pursue if elected as party leader.

These policy points include tax cuts for the middle class and small businesses, as well as establishing a "no-money-down" program that would allow college and university students to start their post-secondary education without having to provide large tuition fees upfront.

Murray said he also wants to have cities and towns that "work" and a government that listens to Ontarians.

His final plank relates to so-called "smart government," or utilizing technology and reorganizing and modernizing the government to make it more efficient and effective.

"Restructuring government and using technology to increase productivity, cut costs and reduce pressure on the public sector will leave us the resources we need for our critical priority areas of spending," Murray said.

Murray pointed to the five-plus years he served as the mayor of Winnipeg as evidence of the experience he has leading a large government.

"I've been a big city mayor. I have successfully led a large government through similar challenges to the ones we face now and I did that with people of all political stripes," he said during the press conference.

Winnipeg city Coun. Jenny Gerbasi, who worked with Murray when he was mayor, described him on Sunday as a consensus builder who works well with people.

"He's very much one of … including all people, building on the strengths of marginalized groups as well as mainstream groups, and bringing everyone together — which is an important role, I think, in a leader," Gerbasi told CBC News.

In 2004, Murray stepped down as mayor and ran for the federal Liberals in the Winnipeg-area riding of Charleswood — St. James — Assiniboia. He was narrowly defeated by Steven Fletcher, the Conservative MP who still holds the riding.

Murray later moved to Ontario and he was a visiting fellow at the University of Toronto for two years before he served as the president and CEO of the Canadian Urban Institute.

He was first elected as the MPP for Toronto Centre in a 2010 byelection and he was subsequently re-elected last year.

Murray joked Sunday being the first to declare a leadership bid made him "the front-runner" and thus, "for this singular, brief shining moment, I know what it feels like to be Justin Trudeau."

But that doesn't mean he won't face tough competition in the leadership race.

Don Valley West MPP Kathleen Wynne has also resigned her cabinet post and it is expected she will formally announce her intentions to run for leader on Monday.

McGuinty has already said he believes she is going to enter the race.

Sandra Pupatello, the former cabinet minister and Windsor West MPP, recently said she is "leaning toward" launching a leadership bid.

A number of cabinet ministers in McGuinty's government have said they will not run for the party leadership.

Ottawa Centre MPP Yasir Naqvi, president of the Ontario Liberal Party, has also said he will not seek the party's leadership.

When Murray spoke to reporters Sunday, he said many sitting MPPs are waiting to see who enters the race before declaring their support for a specific leadership candidate.

However, Murray said his camp did have "several people leaning our way," though he did not directly identify those individuals.