A young Toronto-area gay-rights activist has filed a federal human rights complaint challenging Canada’s policy requiring gay men to observe a waiting period between having sex and donating blood — just two months after Health Canada reduced the wait from five years to one.

A young Toronto-area gay-rights activist has filed a federal human rights complaint challenging Canada's policy requiring gay men to observe a waiting period between having sex and donating blood — just two months after Health Canada reduced the wait from five years to one.

The complaint, filed with the Canadian Human Rights Commission by Brampton resident Christopher Karas, 20, says the new policy remains discriminatory, is outdated and needs to end.

"I think it is based on fear," Karas told CBC News on Friday.

"When it comes down to the policies to secure our blood supplies, we shouldn't be thinking so much about what two people who love each other are doing, but what kind of effects these policies have."

It's an argument that's been heard before. In 2010, the Ontario Superior Court ruled that the blood ban was not discriminatory. But health lawyer Jean Claude Ménard says Karas's case is strong and that the legal analysis could be different this time around because it will be heard by a specialized human rights board.

Make it all or nothing, paralegal argues

In the complaint, obtained by CBC News, Karas is described as feeling he was "of very little value when he learned that he was labeled" for being gay and prohibited from donating "because of his classification and sexual orientation."

"We can't just implement policies and not have a discussion about what kinds of effects they have on the people when they're implemented," Karas said.

If you're going to have a one-year wait, just apply it across the board to everybody or get rid of it entirely.- James Hill, paralegal for Christopher Karas

In June, Health Canada approved an application by Canadian Blood Services to reduce the waiting period with the new policy going into effect August 15th. Prior to the five-year period, there was a blanket ban on donations from men engaging in same-sex intercourse.

The ban on blood donations for men who have sexual contact with other men dates back to the 1980s when an outbreak of HIV/AIDS in the gay community prompted panic across the country and health officials took steps to safeguard Canada's blood supply from contamination.

But paralegal James Hill argues technological advances that make it possible to determine if a person — gay or otherwise — is infected make the waiting period discriminatory, no matter how short. Because all blood is tested anyway, Hill says, there's no reason why Karas shouldn't be allowed to give blood.

"If you're going to have a one-year wait, just apply it across the board to everybody or get rid of it entirely," Hill said. "It's discriminatory to base this on sexual orientation."

In June, federal Health Minister Jane Philpott, who campaigned on a promise to end "discriminatory" restrictions on gay men acknowledged the limitations of the new policy. 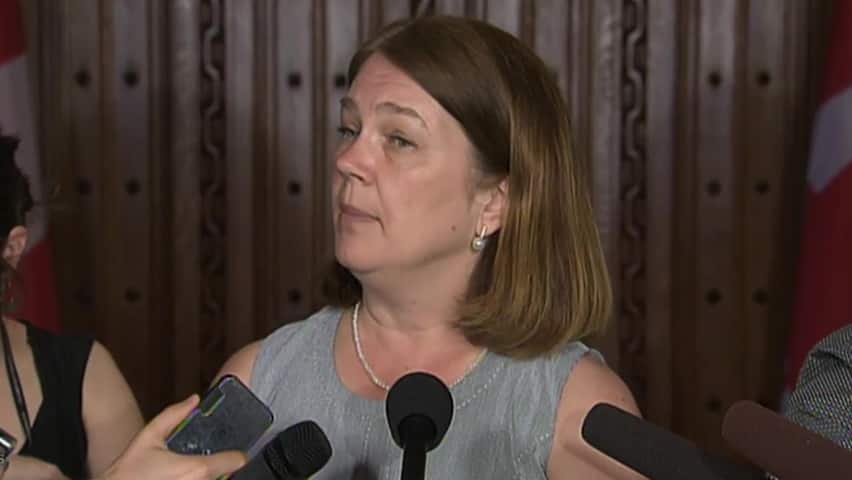 4 years ago
1:17
Health Minister Jane Philpott announces changes to the blood donation policy that will now allow men who have sex with men to donate blood after one year instead of five years. 1:17

"I recognize that this four-year-reduction in the deferral period is not a radical change," she said.

The issue of restrictions on gay men donating blood made headlines in the aftermath of a deadly mass shooting at a gay nightclub in Orlando in June.

Advocates raised alarm bells that gay men couldn't respond to an urgent need for blood donations for members of their community because the U.S. Food and Drug Administration prohibited them from doing so for a year after their last sexual encounter with a man.

"If Christopher, or any gay person, was in that situation in Orlando, they wouldn't be able to use their own blood," Hill told CBC News. "Essentially they're being handcuffed."

"We could save significantly more lives if queer and trans people were allowed to give blood here in Canada. To in effect block these people from giving blood because of who they are or whom they love — there's a problem with that," Karas said.

Karas points to several countries, such as Spain, that have lifted their restrictions. He argues Canada should follow suit.

"I really think a lot of these countries are setting an example for Canada," he said. "It's 2016. Let's do something."

University of Toronto HIV researcher Stephen McCarthy said donor screening remains necessary because while technology has improved, there's still an approximately 10-day lag between the point of donation and the time when disease is detected. Screening donors, he said, helps reduce the risk that a pathogen could enter the blood supply.

"The problem is as good as those tests are… there's a residual risk and we can never eliminate it."

But instead of screening based on sexual orientation, he said he'd like to see donors evaluated based on the risk level of their lifestyles.

According to the Canadian Aids Society, having multiple partners increases the risk of contracting sexually-transmitted diseases, including HIV.

"I really feel the research needed is going to be toward behaviours," McCarthy said. "If someone has multiple partners, that's more of a behaviour statistic than a demographic one."

With files from Natasha MacDonald-Dupuis