Michelle Yu, 18, has been missing since Tuesday 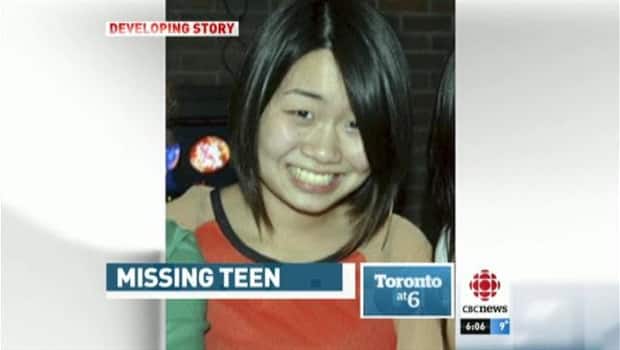 Toronto police are seeking the public’s help in locating Michelle Yu, an 18-year-old who has been missing since Tuesday.

Police say she was last seen at 6 p.m. Tuesday at a TD Bank on Bay Street, near Queen. Her image was captured on the bank's security camera and she appeared to be alone. Members of her family say this is not the bank branch Michelle regularly uses.

She was also seen at around 2:30 p.m. Tuesday in the York Mills Road/Chipstead Road area.

Her family has told police it is out of character for Michelle to leave without letting them know of her whereabouts.

"I feel very sad ... this has scared me," Michelle's mother Sharon told CBC News on Wednesday.

Michelle's friends at York Mills Collegiate are hoping for their friend's safe return.

"I'm trying to keep a positive attitude but I am extremely, extremely worried," said Tara Selvaraj.

Yu is of Asian descent, is five feet seven inches tall and weighs about 125 pounds.

She was wearing a grey American Apparel hooded sweatshirt, brown moccasins and may be wearing glasses.

Anyone with information is asked to contact police at 416-808-3300. An anonymous tip can also be left on the Toronto Police's Facebook page.