Ford can't say when he will kill land transfer tax

Toronto Mayor Rob Ford says it's too soon to say when he will be able to eliminate the land transfer tax, a move that won't be hastened by a year-end surplus at City Hall. 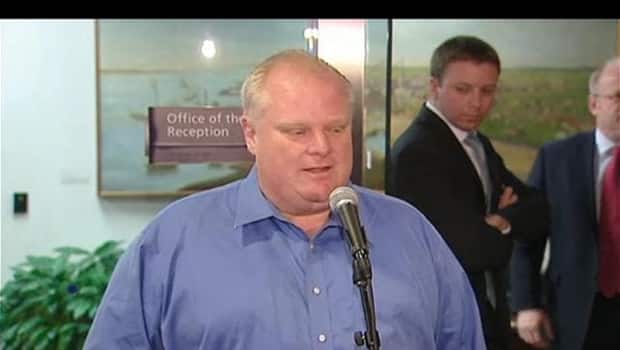 9 years ago
1:59
A hefty year-end surplus will largely be used to pay for new streetcars. 1:59

Toronto Mayor Rob Ford says it’s too soon to say when he will be able to eliminate the land transfer tax, a move that won’t be hastened by a year-end surplus at City Hall.

Ford spoke briefly with reporters on Monday afternoon, when he stepped on a scale as part of his ‘Cut the Waist’ challenge.

The mayor fielded questions about the city’s year-end surplus and his plan for eliminating the land transfer tax.

Ford said the city’s anticipated surplus of at least $140 million could not be used to end the land transfer tax, as council had already voted on how it planned to use the money.

"We have to use 75 per cent on streetcars, which the previous administration spent and we didn’t have any money for, so I’m left to clean up the mess," he said.

"That’s what we’re doing and the other 25 per cent goes into reserve."

First-time purchasers are eligible for a rebate of $3,725.

The mayor also said he couldn’t say exactly when he would be able to move forward with his plans to scrap the tax paid by those purchasing property in Toronto.

"But I have to sit down with our budget chief and take it from there."

The mayor has previously said that he would like to gradually phase out the land transfer tax by 2014.

As for his weight-loss efforts, Ford weighed in at 310 pounds on Monday, down 20 pounds from when he started his challenge in January.

Ford had set a goal of losing 50 pounds by June, along with his brother, Coun. Doug Ford.