In the span of just a few hours on Tuesday night, more rain fell in the city of Toronto than in an entire month. Climate change scientists say Torontonians should brace for more frequent and more intense storm than the one that battered the city on Tuesday night, but the Ontario government still hasn't released its plan to address climate change.

As crews in Toronto continue to clean up from Tuesday's massive rain storm, climate change scientists say we should brace for more frequent and more intense storms than the one that battered the city.

In the span of just a few hours on Tuesday night, between 50 and 100 millimetres of rain fell on the city.

"The bottom line is: flooding is the manifestation of climate change that is the most problematic in Canada," said Dr. Blair Feltmate, the head of the Intact Centre on Climate Adaptation at the University of Waterloo.

Felmate said Tuesday's storm is a sign of what's to come.

"The increase in the frequency and the overall prevalence or magnitude of floods is consistent with what we would predict based on based on climate change."

Since being sworn in, Ontario's Progressive Conservative government has yet to introduce any plan to address climate change. While it says the plan is forthcoming, some experts warn the government is moving in the opposite direction.

In late July, the PC government introduced the Cap and Trade Cancellation Act — or Bill 4 — which, if passed, would pull the province of Ontario out of the cap-and-trade market.  The government claims Ontario families will save money through energy and fuel costs as well as "indirect costs" that were a result of cap-and-trade.

Cap-and-trade was brought in by the previous Liberal government to create incentives for industry to reduce their carbon footprint by putting limits on the amount of acceptable emissions.

Bill 4 would also require the province to set targets for reducing greenhouse gas emissions and release a plan to fight climate change, though both could be revised down the line. Phillips wouldn't say what those targets or plan would look like.

"When we bring the plan forward, we'll obviously talk about it in details. It'll obviously have targets, and the requirement as well for the government to report on that plan."

Earlier in July, the government also cancelled 758 renewable energy contracts, in what it said was an effort to reduce electricity bills in the province.

"This government has completely stopped climate action ... if it wanted to bring in another climate plan, it could have continued with the previous until it had a new one in place. Irresponsibly they decided to stop all action," said NDP energy, environment and climate change critic Peter Tabuns.

"What I've seen so far is a complete dereliction of duty."

Climate change experts say the Ontario government's move to pull out of cap-and-trade and the carbon tax, and cancel green energy contracts will have long-term effects on the environment beyond their tenure in power. 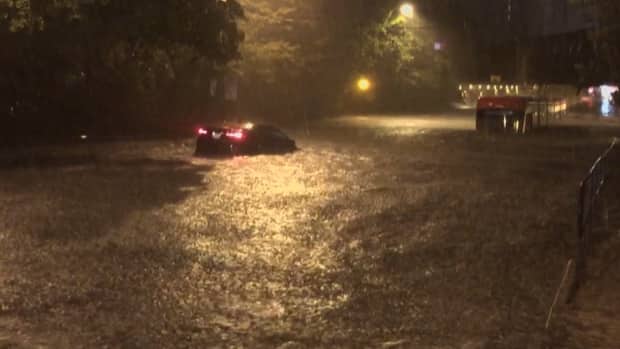 "It's more than a drop in the bucket. It's quite threatening," said York University professor Dr. ​Carla Lipsig-Mumme.

"It undermines the whole country. The causes of climate change don't stop at the borders of provinces or countries."

Lipsig-Mumme said Tuesday's storm is a "wake-up call" that provinces need to be more proactive on slowing the creation of greenhouse gases.

"What is happening to us now was caused a while ago, but we do have real things we can do now," said Lipsig-Mumme.