A group of Canadian farmers and agriculture organizations is calling for major changes that could transform their industry from a major polluter to a solution in the fight against climate change. It's possible, experts say, but it likely won't be easy.

After trudging through the thick layer of snow blanketing his farmland, Brent Preston shovels some aside and begins digging into the soil.

Under the snow, the ground is unexpectedly green, with a medley of peas, sunflowers, clover and oats alive and thriving in the dead of winter.

"One thing we like to say is: there's never any bare soil in nature," Preston said, dusting the snow off a chunk of earth in his hands.

"The more diversity you have, the healthier the soil is going to be."

While the plants are alive, Preston has no intention of ever harvesting them. When the growing season arrives, he will plow them back into the soil, making way for the salad greens, spinach and cucumbers he produces at his organic farm in Creemore, Ont.

It's a practice known as cover cropping, an ancient but now uncommon technique in which crops are planted during the off season to keep soil healthy and active. 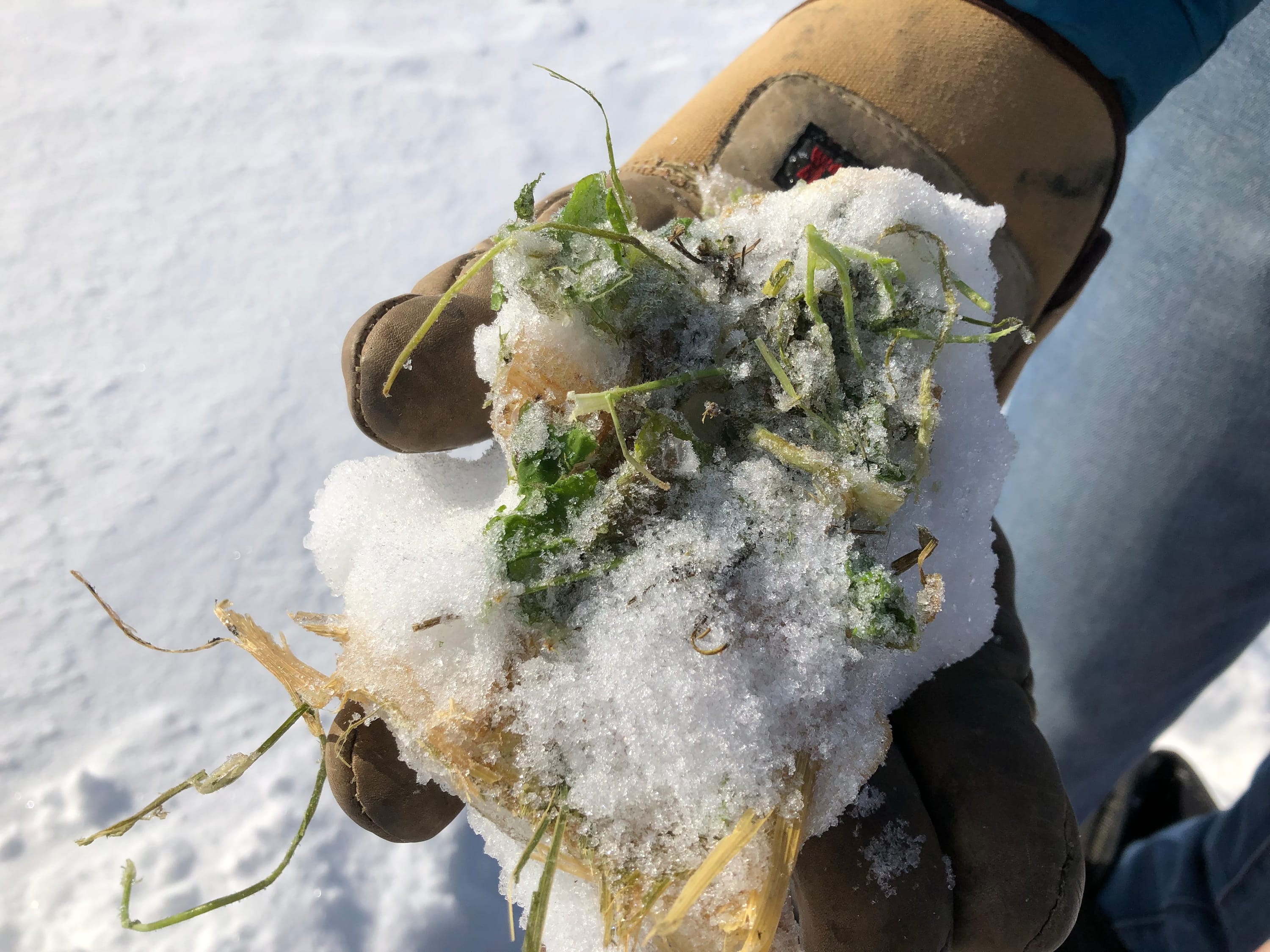 12 months agoVideo
0:42
Brent Preston, a farmer in Creemore, Ont., is calling for major changes to make farming more environmentally friendly and give his colleagues a larger voice in climate policy. 0:42

Critically, cover crops also allow the land to extract carbon from the atmosphere. That ability could be a powerful tool in the fight against climate change, which farmers like Preston call a pressing existential threat to Canada's agricultural industry and the health of the planet.

"We've realized that doing it just on our little farm isn't going to have enough of an impact," Preston said. "There are thousands of other farms like ours across the country."

Preston is now part of a group called Farmers for Climate Solutions, which intends to promote environmental practices while also giving farmers a stronger voice in Canada's climate change policies.

Those changes will help Canada reduce emissions while also making farms more resilient to the effects of climate change such as droughts and unpredictable growing seasons, the group says.

The Canada-wide coalition, which includes organizations such as the National Farmers Union and Canadian Organic Growers, launched on Tuesday to mark national Agriculture Day.

As of 2017, Canada's agriculture industry represents 10 per cent of greenhouse gas emissions. The true contribution is somewhat higher, since that figure only accounts for the production of crops and livestock, and not the use of fossil fuels or fertilizers on farmland.

"When it comes to climate change, people feel like farmers are part of the problem," said Preston's partner Gillian Flies.

But unlike other major contributors, such as the oil and gas industry, farming theoretically has the potential to become carbon neutral or even carbon negative, meaning it could one day extract more harmful emissions from the atmosphere than it generates.

"Agriculture is a huge contributor to carbon emissions but it also offers a huge opportunity to reduce carbon emissions and to capture carbon," said Anja Geitmann, a professor at McGill University's plant science program.

Healthy farmland, Geitmann explained, can sequester carbon into the soil through the process of photosynthesis, helping reduce the amount of harmful greenhouse gases in the atmosphere.

The federal agency Agriculture and Agri-Food Canada notes that earth's existing farmland could absorb all of the world's greenhouse gas emissions for the next 100 years at current rates if properly used.

But according to Farmers for Climate Solutions, the existing system of industrial agriculture makes it impossible to realize the carbon fighting potential of Canada's 160 million acres of farmland.

The group points to soil tilling, chemical products, fossil fuel usage and low biodiversity on farms as key areas that must be improved upon.

Failing to do so, they argue, will prevent the nation's farmland from reducing carbon and make farms more vulnerable to the effects of climate change.

"It's really impacting our ability to grow food," said Flies, pointing to the longer droughts and unpredictable weather making it harder for Canadian farmers to operate.

While Geitmann hailed the coalition's "ambitious" plan to tackle climate change, she noted that several major obstacles could make it hard to achieve its goals.

Chiefly, she pointed to potentially higher costs and the challenges of implementing new practices that have been in place for decades.

Moving away from soil tilling, for example, may require a more laborious system of removing weeds from soil that could be challenging to some farmers.

The Canadian Federation of Agriculture also called the plan to become carbon neutral "prohibitively costly" without policy changes such as exempting farmers from the federal carbon tax.

Farmers for Climate Solutions also acknowledge that the powerful chemical and fertilizer industry will likely resist widespread change that points farmers away from its products.

Much of the information supplied to farmers comes from that industry, Flies said, so her group is also looking for new strategies to educate farmers about environmental practices.

Paul Slomp, who raises beef cattle in Saint-André-Avellin, Que., said his farm has already moved away from chemicals and artificial feeds. His 200 cows now graze exclusively on grass, which he manages with the goal of maximizing the land's ability to capture carbon.

He questioned the worries around higher costs, and said he's now making more money than he did before the changes.

"Because we're reducing the amount of input that we need to purchase, we're actually able to generate a much better profit margin," said Slomp, who is not a member of Farmers for Climate Solutions.

"The cows are meant to do this; they thrive in a system like ours, and it can be quite profitable."