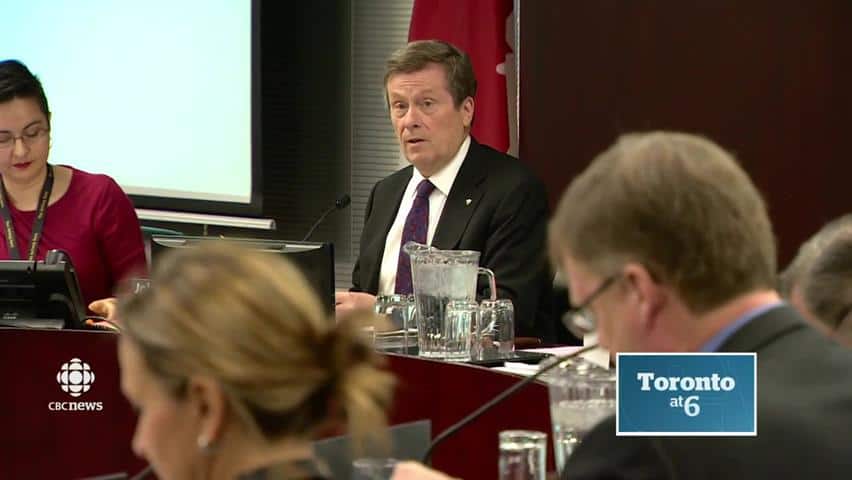 The U-shaped line would run into downtown from Mt. Denis in the northwest, down to Union Station then follow the GO Stouffville line up to Unionville.

City council is also asked to study the feasibility of the SmartTrack options on the Eglinton Avenue West corridor, from Mount Dennis station to the Mississauga Airport Corporate Centre.

The additional funding sought in Thursday's meeting would be used toward various feasibility studies and assessments of the Eglinton option, which would include at least three stations and be integrated with the Kitchener GO corridor and the regional Go Transit expansion plan.

Tory said the plan can bring relief to the city’s overcrowded subway system within seven years. He has pegged its cost at $8 billion.

"Here's the bottom line: SmartTrack is proceeding ahead to be given the careful study that it deserves," Tory said after the executive committee's meeting, adding that the latest decision is consistent with SmartTrack's seven-year timeline.

Several councillors expressed their doubts about the Eglinton portion of the SmartTrack plan.

Coun. Gord Perks said he will not support the funding or the studies for the Eglinton option. The city should instead stick with the approved Eglinton Crosstown line.

“It’s bad transit planning and I won’t support it,” he told reporters during a break from the meeting.

Coun. Janet Davis echoed Perks’ sentiment. She said the rest of the SmartTrack — building on existing corridors — “makes a lot of sense,” but she also has doubts about the Eglinton option.

Davis also said that the SmartTrack discussion is deferring the attention paid to other studies, such as the proposed Downtown Relief Line, Finch West LRT and other light rail transit components.

“They cannot lose attention in this process. It is a concern,” she said.

In December, the council voted 42-1 to approve a motion that will speed up the research phase for the SmartTrack plan. Former mayor and currently Ward 2 Etobicoke North Coun. Rob Ford was the only councillor to vote no.

Thursday’s meeting is the executive committee’s first meeting in 2015.