A new report from People for Education says Ontario students are being asked to make critical decisions at too young an age. 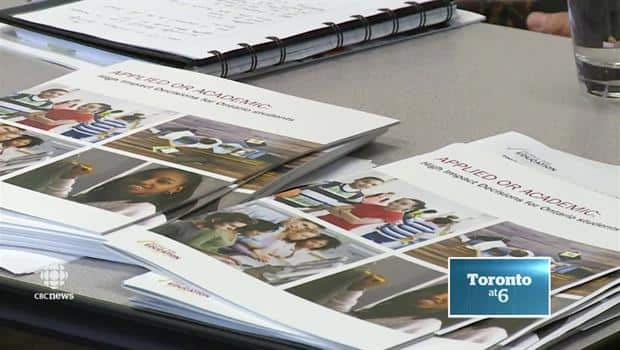 6 years agoVideo
2:46
A report is calling for Ontario to end the practice of 'streaming' students into academic and applied tracks. 2:46

A new report from People for Education says Ontario students are being asked to make critical decisions about the direction of their education at too young an age.

The study says asking Grade 8 students to choose between academic and applied courses in high school sets some students up for failure.

It also cites a Toronto District School Board report that says only 40 per cent of students who took applied courses in Grade 9 had graduated after five years.

"This is a practice that really leads to no graduation … that sets up students for failure," said Jehad Aliweiwi, executive director of the Laidlaw Foundation, the group that commissioned the study.

Aliweiwi said research in the report shows that Grade 8 is "way too young" for students to make a "potentially life-altering decision" and said streaming appears to be particularly harmful to students from economically challenged neighbourhoods.

Aliweiwi said he'd like to see the applied versus academic decision pushed back one year for students, until Grade 9.

His group also wants to study how schools in different jurisdictions handle streaming.

Applied and academic course streams were introduced in 1999.

But she said the report has some strong data that students in applied students are struggling.

Sandals said it's up to the province to figure out why and how to fix it.

Watch the video above to see a full report from the CBC's Shannon Martin.

You can also read the report in the document embedded below: