It appears a member of the Miami Heat has become Toronto's public enemy No. 1 after he continued to shoot basketballs during Canada's national anthem.

'If anybody thinks I'm being disrespectful to a country, then they don't know who Dwyane Wade is' 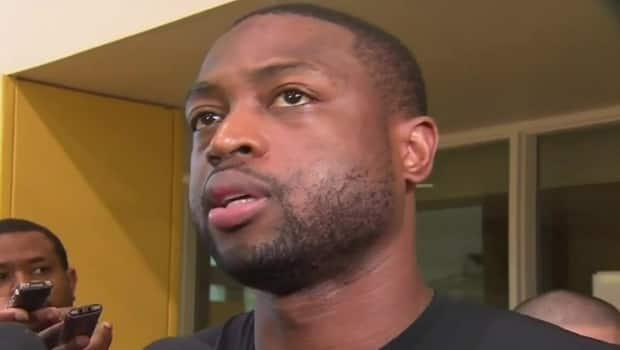 4 years ago
1:00
The Heat shooting guard spoke to the media about shooting baskets during O Canada in Game 3 vs Toronto 1:00

It appears an NBA star has become public enemy No. 1 north of the border after he continued to shoot basketballs during Canada's national anthem.

Dwyane Wade of the Miami Heat is a three-time NBA champion and former NBA Finals MVP — but it's not his play between whistles against the Toronto Raptors that has got him in hot water with Canadians.

Before the beginning of Game 3 of the playoff series between the Dinos and Heat in Miami, the 34-year-old was caught on camera working on his shot instead of standing still with teammates during Saturday's rendition of O Canada.

In the video, you can see Wade shoot at least three jumpers — missing all three — as a young girl began singing the anthem.

North of the border, some fans took exception on social media about what they perceive as a lack of respect for the Canadian anthem.

I could do without anthems in sports, but what a classless display by Dwyane Wade taking jump shots during "O Canada" yesterday.

Some said on Twitter that the league should deliver a fine to the Chicago-born shooting guard, who is earning $20 million US this season.

Others said the well-known player is being misunderstood and was simply trying to get a pre-game ritual out of the way by sinking his final shot before an important playoff game.

Dwyane Wade always has to make his last shot before lining up for the anthems. I don't think it was disrespect of O Canada. He kept missing.

Toronto-born sportscaster Mark Jones of ESPN said Canadians were being a little too touchy in response to the incident.

Another Canadian said fans should settle down and use the moment as an opportunity to have some fun with Wade when the series returns to the Air Canada Centre for Game 5 on Wednesday.

The Dwyane Wade anthem story is being blown out of proportion, though it'll be funny if Raps fans sing Oh Canada when he shoots free throws.

On Sunday, Wade defended his actions.

"I'm not a disrespectful person," Wade said. "So if anybody thinks I'm being disrespectful to a country, then they don't know who Dwyane Wade is."

Wade added he would adjust his pre-game ritual for the next game of the playoff series.

"If people aren't here, they see video footage of what they want to see," he said.

The extra practice may have helped Wade, who scored 38 points for Miami in a losing effort, but Toronto ended up winning the game 95-91 in regulation.

"Players, coaches and trainers are to stand and line up in a dignified posture along the sidelines or on the foul line during the playing of the national anthem."

It is not yet clear if Wade will be disciplined by the league for taking a few extra shots. In 1996, the NBA suspended Mahmoud Abdul-Rauf for one game for refusing to stand during the U.S. national anthem.

Whether the league decides to issue a fine, suspension or no penalty at all, it appears the move has only increased tensions for Canadian fans who have a rooting interest in a second-round playoff series for the first time in 15 years.

Fans can see how Wade reacts to the anthem when the series continues in Miami with Game 4 Monday at 8 p.m. ET.