Expect major delays on the Gardiner Expressway and GO Transit's Lakeshore West line this weekend now that construction crews are pulling down two west-end bridges spanning the rails. Service on the Lakeshore East line will also be affected by track work. 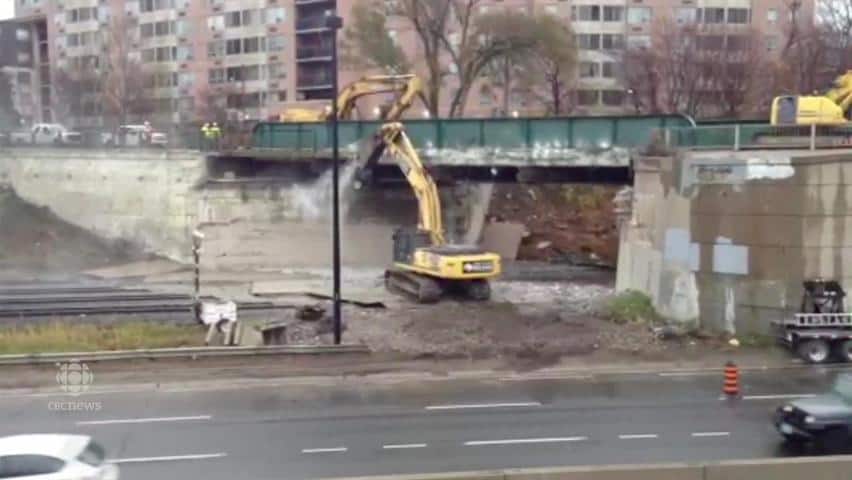 5 years ago
0:25
Construction crews are demolishing two 114-year-old bridges in Toronto this weekend, the Dowling Avenue and Dunn Avenue bridges. 0:25

Expect major delays on the Gardiner Expressway and GO Transit's Lakeshore West line this weekend now that construction crews are pulling down two west-end bridges spanning the rails. Service on the Lakeshore East line will also be affected by track work.

Crews began demolishing the Dunn Avenue and Dowling Avenue bridges this afternoon, two pieces of infrastructure are jointly owned by Metrolinx and the City of Toronto. Both roads will be closed in the area for the bridge removal.

As a result, there will be disruptions on the Gardiner Expressway in both directions this weekend. The right lane from Dufferin Street to Dowling Avenue going westbound is closed to traffic, leaving two lanes for vehicles, as is the ramp from Jameson Avenue to the westbound Gardiner. Both closures will be in effect until Monday at 5 a.m.

The demolition work is slated to be finished by Sunday.

Metrolinx said in a news release that the bridges were built in 1911 and have reached the end of their service lives.

Meanwhile, other maintenance work will affect travel on the eastbound Gardiner. The ramp from Park Lawn Road to eastbound Lake Shore Boulevard will be closed. Motorists should note that Lake Shore Boulevard from Cherry Street to Parliament Street will see the westbound curb lane occupied for duct proving until Monday at 5 a.m. Starting Monday at 9.a.m, there will also be a lane occupied by maintenance crews in both directions.

Meanwhile, there are additional disruptions this weekend on the GO trains along the Lakeshore West line, which will only run between Mimico and Aldershot stations. Anyone trying to get to Union Station or Exhibition Place is encouraged to use the Milton line, which will be operating this weekend in both directions, stopping at every station every three hours. The Milton line is normally not operational during the weekend.

Commuters travelling between Mimico and Union stations are encouraged to use the TTC.

The Lakeshore East line will also have reduced service this weekend due to track work on the future South Blair Street underpass in Whitby. Service will be reduced to once an hour for stops in Pickering and Oshawa to and from Union. These changes will take effect Friday evening and will run this weekend and next.

The shutdown won't affect other GO Transit train service, or the Union Pearson Express.​ For a full list of GO Transit changes on the Lakeshore West and Milton lines, visit the website.