Dalton McGuinty comes under fire in question period as Progressive Conservative Leader Tim Hudak presses the Ontario premier about which of the Drummond report recommendations he will adopt. 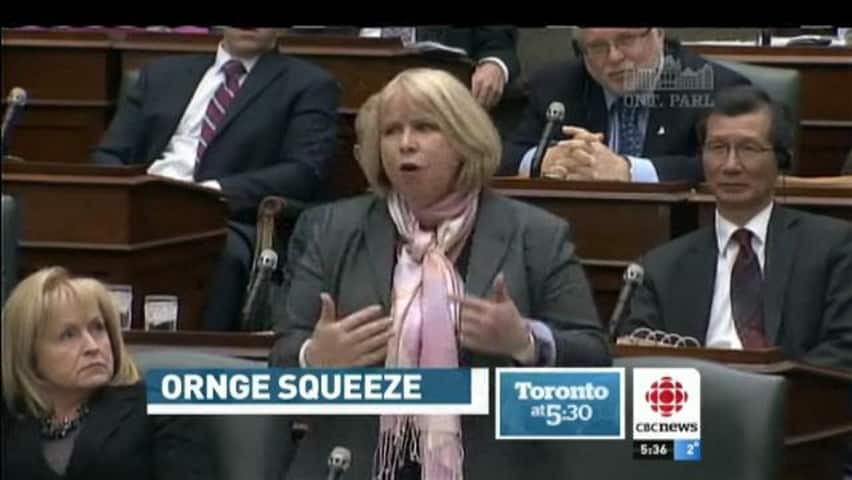 Some of the toughest questions in Tuesday’s question period were directed at Matthews about Ornge, an agency that receives $150 million a year and has come under fire for its high salaries and questionable business practices.

The government has recently cleaned house at the embattled agency, replacing former CEO Chris Mazza — who was paid $1.4 million a year — and its board of directors.

Ornge’s for-profit arm was also shut down and the Ontario Provincial Police were called in to investigate.

But Frank Klees, the Progressive Conservative member for Newmarket-Aurora, said Matthews isn’t taking ownership of her role in the Ornge debacle.

"She wants to feign ignorance, she claims that she was lied to by senior advisers and wants to now hide behind the veil of a criminal investigation," said Klees.

NDP Leader Andrea Horwath is also calling for Matthews to step down.

"Either she's being willfully ignorant or she's grossly incompetent," said Horwath. "All of this mess has occurred under her watch. Certainly she needs to account for it."

Mathews has refused to step down and McGuinty is defending his health minister, saying she’s responded well to the problems at Ornge.

"I'm very, very proud of the way that Deb Matthews has responded," he said Tuesday. "I think she responded rather decisively."

Klees responded to those comments with disbelief.

"If months of warnings and months of inaction is decisiveness in the premier's books, then we have a serious problem in this province."

Dalton McGuinty came under fire in question period on Tuesday as Progressive Conservative Leader Tim Hudak pressed the premier about which of the Drummond report recommendations the Liberals will implement.

The debate comes as the legislature resumes sitting after a long Christmas break and five days after Drummond's report outlined a list of 362 recommendations the province must adopt to balance the budget by 2018.

McGuinty has not been specific about which of Drummond's recommendations the Liberals will implement ahead of the budget, which is expected to come in late March.

In question period on Tuesday, Hudak said the Liberals must move ahead with the difficult decisions and make the cuts Drummond calls for.

"Tell me one thing that you actually will implement," said Hudak. "Waiting until the end of March is not good enough, we’re in a big hole. Will you bring the budget ahead sooner?"

McGuinty said many of Drummond's findings will be reflected in the spring budget but said the government must also consult other stakeholders.

Earlier in the day, McGuinty told reporters the province must balance the budget by 2018 but said there is an open debate about how to achieve it.

"I’m not going to be providing a list of 362 recommendations we support and which we don’t," he said.

McGuinty also said Tuesday he would not raise taxes.

Earlier in the day, PC finance critic Peter Shurman said the Liberals must heed Drummond's warnings that all 362 of the recommendations need to be followed if the budget is to be balanced by 2018.

"If you don't want to adopt the 362 — which he and we readily admit you might not want to do — then you'd better have some alternatives," Shurman said.

Shurman said Ontario has been the "laggard in Confederation" as far as employment is concerned.

Nearly 600,000 people are out of work in the province and Drummond's report gives little reason for hope, predicting that Ontario's GDP growth will slow, well paid jobs will become scarce and the manufacturing sector will wither.

NDP leader Andrea Horwarth, who said she is not willing to give up on the manufacturing sector, is questioning the Liberals' motives in commissioning Drummond.

She said the Liberals likely wanted a report that painted a dire picture of the economy and called for drastic measures, so they could refuse some of the proposed cuts and "look like heroes".

Horwath rejects the Drummond report's advice that people should pay more for electricity and water.

"Let's not load up families with all kinds of extra cost burdens and make them unable to spend money in the local economy,  slowing our economy down even further," she said.

The Liberals have already signalled they will consider Horwath's request to cancel a planned cut in corporate taxes to garner NDP support for the budget.

Finance Minister Dwight Duncan is asking to meet with opposition finance critics as he prepares his budget.