Peter Hamilton was the first person to come to the aid of a woman who Toronto police say was confined to a house by a man now facing charges of kidnapping, forcible confinement and assault. 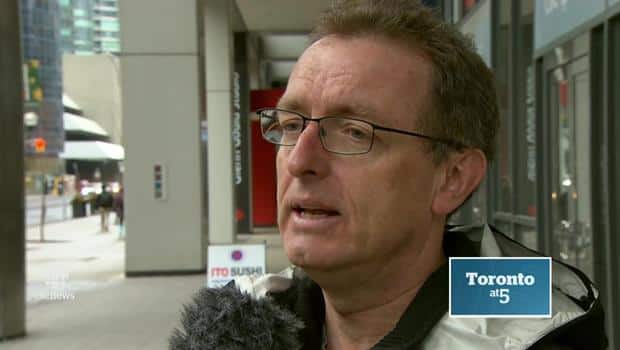 Responding to a call for help

6 years ago
1:41
A Toronto man is being called a hero for helping rescue a woman who was allegedly held captive for days and sexually assaulted. 1:41

It was a woman's cries of "help me, help me please," that prompted Toronto resident Peter Hamilton to rescue a woman from a house where police say she had been confined for days and sexually assaulted.

Kidnapping, forcible confinement and assault charges have since been laid against Rejean Hermel Perron, 43. Police allege he held and sexually assaulted a 27-year-old woman inside his house for five days.

The woman, a sex worker, told police she was approached by a man in the Sherbourne Street and Shuter Street area on March 31 regarding a business transaction. She agreed to go to his home but changed her mind about going inside when she got there. She said the man used a gun to force her inside the residence in the Dundas Street East and Jones Street area.

On Wednesday, Peter Hamilton told CBC's Metro Morning that he heard a woman's desperate cries for help while out walking his dog Sunday in the Dundas Street East and Jones Street area.

Hamilton said the woman had managed to reach the front veranda of the house, but could go no further due to restraints on both her hands and feet.

"I heard a cry for help from one of the houses on our street," he told host Matt Galloway.

He rushed to the veranda to help and found the woman naked from the waist down and struggling to escape.

"She had managed to get to the door," he recalled. "She said, 'I've been kidnapped and I've been held for five days in this house.'"

"My first thought was 'how do I get her out of here?'" Hamilton said.

'I knew this was a dangerous situation'

The Good Samaritan wanted to call 911 but had left his house without a cellphone. The woman told Hamilton that her abductor was still inside the house and was armed with both a gun and a knife.

"I knew this was a dangerous situation," said Hamilton. "I couldn't leave her, but I could not go back to my house to get my phone."

Hamilton began working to remove the restraints, which were a combination of cloth and packing tape. He said the woman's arms and legs were bruised.

A heart-stopping moment came when a man suddenly emerged from the residence.

I couldn't leave her, but I couldn't go back to my house to get my phone. — Peter Hamilton

Hamilton said he stood up, preparing himself for a possible confrontation that thankfully didn't happen. After the man exited the house and saw Hamilton, he fled on foot.

"This is where it could have taken a turn for the worse," said Hamilton. "He came out and he ran. He saw us and he just ran and that was a very good thing."

Hamilton was able to remove the woman's restraints, using the only implement he had: a nail clipper.

Eventually other passersby heard the commotion and came to help. One had a cellphone and police were called.

Hamilton said the woman appeared to be in shock, but thanked him repeatedly for helping her escape.

"She was very emotionally distressed and she said, 'I'm sorry I have to put you through this.' There was nothing to apologize for," he said.

The woman was taken to hospital, but has since been released and is recovering from her ordeal. Hamilton said he's just thankful she's OK.

"It's just the right thing to do," he said of his rescue efforts. "We live in a society where sometimes people turn a blind eye to what's going on around them."