Doug Ford 'is not our candidate,' Ontario PCs insist

Ontario's Progressive Conservatives won't be championing embattled Toronto city councillor Doug Ford, once seen as a promising high-profile name for the party, in any upcoming election. 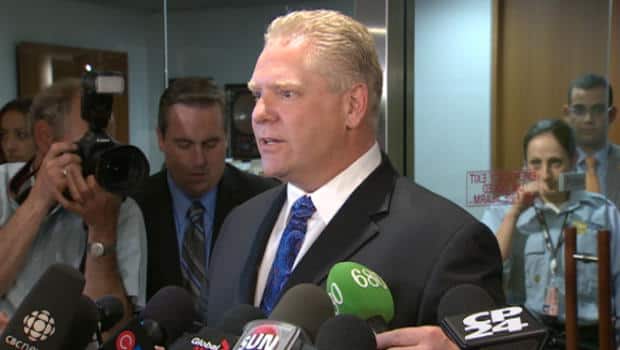 Ontario's Progressive Conservatives won't be championing embattled Toronto city Coun. Doug Ford, once seen as a promising high-profile name for the party, in any upcoming election.

"He is not our candidate," PC house leader Jim Wilson told a news conference today, referring to Ford's declarations last month that he was ready to enter provincial politics to face off against Liberal Premier Kathleen Wynne.

Wilson's comments come in stark contrast to remarks from the party in April praising the Etobicoke councillor and his brother, Toronto Mayor Rob Ford, for belt-tightening economic policies at city hall.

But the Tories are reportedly now keen to distance themselves from the Ford family name.

The mayor has been embroiled this month in a scandal after the Toronto Star and U.S. gossip website Gawker said they had viewed a video that purports to show him smoking what appears to be crack cocaine. Last week, the Globe and Mail reported about Doug Ford's alleged background as a hashish dealer in Etobicoke.

Both Fords have dismissed the reports, characterizing them as part of a smear campaign.

'I don't even know the guy'

Asked by reporters today if Doug Ford could still run in a provincial election, Wilson replied, "I don't even know the guy."

With the Fords now making international headlines, provincial politicians has begun to weigh in more and more about troubles at Toronto City Hall.

At a press conference earlier today, the Ontario premier told journalists she was "worried about the situation" in Toronto amid the allegations against mayor Ford and a series of resignations from his office.

"We're monitoring it very carefully, and as appropriate, we will be involved," Wynne said, stressing that it's necessary to follow due process before any intervention can happen to keep city hall running as it should be.

Pressed about what actions could be taken in this situation, Wynne said the municipal level of government is still the "creature" of the province, "and so there are, as has already been said, some changes that can be made to legislation."

Wynne said that as a Toronto resident and premier of the province, "it's hard to imagine it could be business as usual" at city hall.

Doug Ford assured reporters at a media scrum today that phone calls were still being returned, emails were being answered and the municipality was running smoothly. He also responded angrily to Wynne's comments.

"She has the nerve, the hypocrisy, to come and criticize the mayor," he said. "I have one message to the premier: Get your own house in order, get it in order for the taxpayers."

In a continuation of upheaval at the mayor's office, two more of mayor Ford's staffers departed today. That brings the number of Ford staffers who are no longer working at city hall to five since the crack cocaine allegations surfaced on May 17.