Holding R.I.P. signs in honour of Toronto residents who lost their lives to homelessness so far this year, councillors and other housing advocates called on the city to create an action plan to tackle the issue.

So far in 2019, 4 Toronto residents have died from homelessness

Holding R.I.P. signs in honour of Toronto residents who lost their lives to homelessness so far this year, city councillors and other housing advocates called on the city to create an urgent action plan to tackle the issue.

She was joined by several advocates, including nurse Cathy Crowe, as well as NDP MPP for Toronto Centre Suze Morrison and councillors Josh Matlow and Gord Perks, asking the city to declare a state of emergency for homelessness. 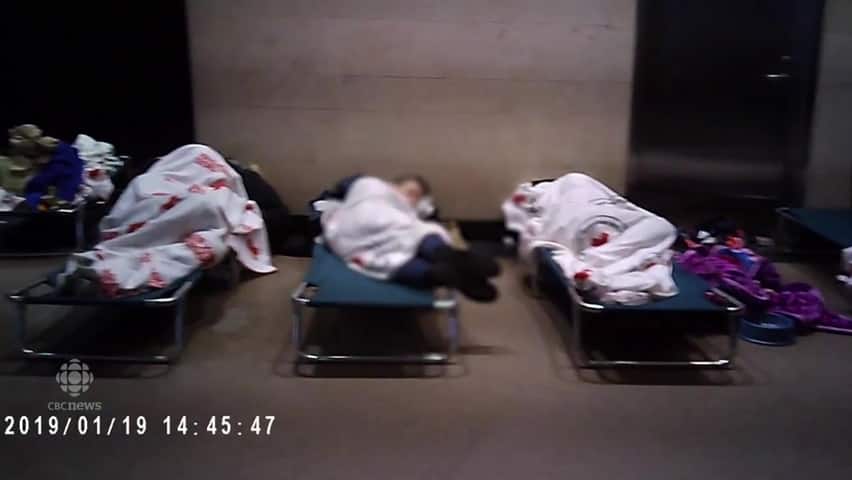 Several long-time advocates for the homeless officially unveiled the Shelter and Housing Justice Network (SHJN) last month, when they also demanded the city declare the issue an emergency.

Crowe said due to an overflow of occupants, a "second-tier" system has been created, with shelter conditions that have become "untenable, given the crowding and conditions."

She said sites that started as temporary centres during cold-weather alerts are now permanent shelters for over 1,000 people in the city, and can no longer close come spring and summer.

"It looks like a scene you would see from Hurricane Katrina or some other catastrophe," Crowe told CBC Toronto.

Crowe and other advocates have shared "secret" footage with various media outlets, aimed at conveying the conditions of these respite sites. Although she's not naming specific locations, the first is a warming centre and the second and third are respite sites.

Because of violence and theft within these centres, Crowe says there are an additional 400 people left outside.

By declaring a human rights crisis, the advocates hope to bring together the three levels of government to develop an urgent housing plan.

Wong-Tam said that in 2018, 181,000 people were on Toronto's centralized waiting list for housing, and added that the city's rental vacancy rate is an "unhealthy 1.1%, with home sharing apps putting further pressure on our rental market."

The advocates have five main recommendations for city council:

Tory says he's not calling for state of emergency

But Toronto Mayor John Tory says instead of calling for a state of emergency, he is seeking long-term solutions to supportive and affordable housing.

"That is something that is terribly lacking in our city at the moment," he said Tuesday.

He said surveys taken by the government reveal around 50 per cent of homeless residents are suffering from mental health or addiction issues. He said he hopes to gain support from other levels of government for ongoing initiatives to move people out of shelters.

"By long-term, I don't mean years," Tory said. "We need to get going on this with the other governments right away."

One of those initiatives is going in front of the executive committee tomorrow, and will take 11 pieces of city-owned land and convert them into affordable housing units.

"They're under pressure," he said.

When asked about short-term solutions, Tory reccomended advocates shift their focus to Queen's Park, where he says major decisions on supportive housing are made.

Adam Vaughan, MP for Spadina-Fort York and parliamentary secretary for housing and urban affairs, said the federal government has "stepped up" with $5.7 billion dollars to date to deal with housing and homelessness across Canada, with an additional $40 billion to come within the next 10 years.

"We are prepared to meet at any time, anywhere with any city, particularly Toronto, to tackle this problem," he said. "Homelessness must end."

He said the city needs to present the federal government with a plan for any funding that would come its way.

'Every time we get a dollar in, we have a need for it'

Patricia Mueller, chief executive officer of the organization Homes First, says there's a "perfect storm" of factors that are radically increasing homelessness, including the intake of refugees, Toronto's condo boom and the opioid crisis — and supportive shelters just can't keep up with the demand.

"We would like to build," Mueller said. "Every time we get a dollar in, we have a need for it, to help people, to feed people."

For that reason, she said there are no outstanding budget allowances for down payments toward new spaces.

Homes First's housing sites have adopted a philosophy of supportive housing on a "continuum of need." Some sites require 24/7 support, while other only require daily or weekly check-ins, she says.