Deaths of 2 men during cold snap prompt call for action

The deaths of two homeless men during a cold snap in Toronto brought protesters to the mayor's office Tuesday, as the city moved to open emergency warming centres ahead of a formal weather warning. 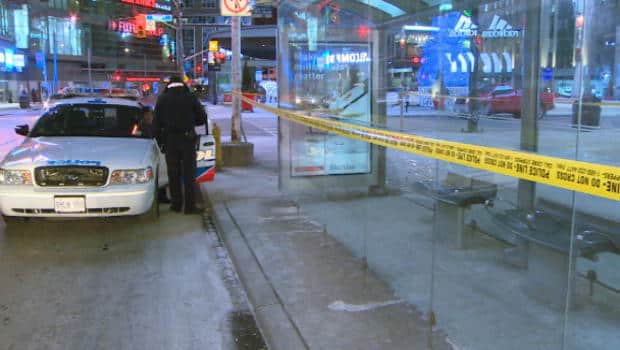 6 years ago
3:51
The extreme cold may have played a role in at least three deaths in recent days across the country 3:51

The deaths of two homeless men during a cold snap in Toronto brought protesters to the mayor's office Tuesday, as the city moved to open emergency warming centres ahead of a formal weather warning.

Members of the Ontario Coalition Against Poverty went to Mayor John Tory's office to urge the city to issue an extreme cold weather alert, so that additional resources would be available to the city's most vulnerable residents.

Such alerts are typically triggered when the temperature plummets to –15 C, something that is expected to happen on Wednesday, at which time the city plans to issue an alert. The temperature dropped just short of that point overnight, between Monday and Tuesday.

Tory called for the city to immediately open warming centres on Tuesday. He said the death of any person on the streets of Toronto "is one too many."

The OCAP protest came after two homeless men were found dead in less than 24 hours — one was 55 years old and the other 60. The man who died Tuesday was wearing only jeans and a T-shirt in a bus shelter. The man who died on Monday was found inside an abandoned panel truck.

"This shouldn't be the way we learn about homelessness," said Barrick German, a protester who came to city hall on Tuesday.

Separately from the city, Environment Canada has issued an extreme cold weather warning, forecasting that the wind chill will make it feel like close to –30 on Wednesday afternoon and night.

With a report from the CBC's Shannon Martin