Environmental groups are counting down the days until Saturday's closure of a coal-fired power plant.

Environmental groups are counting down the days until Saturday's closure of a coal-fired power plant.

The Lakeview plant will be shut down as part of the Liberal government's promise to close all of the province's coal-burning stations by 2007. [ view map ]

People who live and work near the facility have long complained about the smoke that spews from the plant's four stacks, fouling the air and leaving a layer of dirt on their cars.

"Especially in the summer, when I am out working when it's really hot, you notice it when you are breathing," Key said.

Some people who live nearby say a local sewage treatment plant smells worse than the power station.

But the chair of the Ontario Clean Air Alliance says emissions from the Lakeview plant are far more toxic than sewer smells.

"It emits huge quantities of sulfur dioxides and nitrogen dioxides that cause smog, that lead to asthma attacks in our children, that lead to heart disease, lung disease and, ultimately, death."

Gibbons expects that closing Lakeview will result in fewer smog days this summer for the Greater Toronto Area. 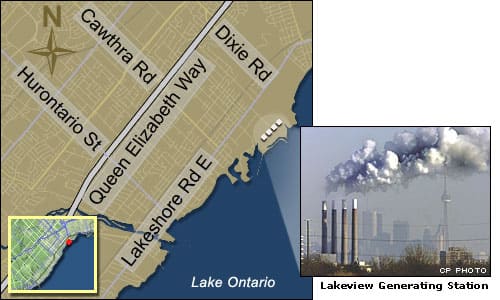