Witnesses describe the panic at the scene of a mass shooting in Toronto’s Greektown neighbourhood Sunday night.

'He shot the girl right in front of me,' says witness to mass shooting in Toronto

Kerri Lahey was having dinner at a restaurant in Toronto's scenic Greektown neighbourhood Sunday evening when shots rang out.

The area, best known for its bustling cafés and restaurants, suddenly turned into a scene of horror as, Lahey says, a woman was shot right in front of her.

"We were sitting out on the patio and we heard shots, so we went inside, and then he came in the restaurant and he shot the girl right in front of me," Lahey said.

"It went right through her lungs. Thank God for the cops, because the paramedics showed up so late that the cops saved her life."

Lahey was at 7Numbers restaurant, near the scene of the deadly shooting on the city's Danforth Avenue that killed an 18-year-old woman, a 10-year-old girl and sent 13 others to hospital.

"It was really bad. We were hiding in the basement. My boyfriend went to the bathroom. As I was going to the bathroom, the guy came through the side door and just shot her right in front of me." 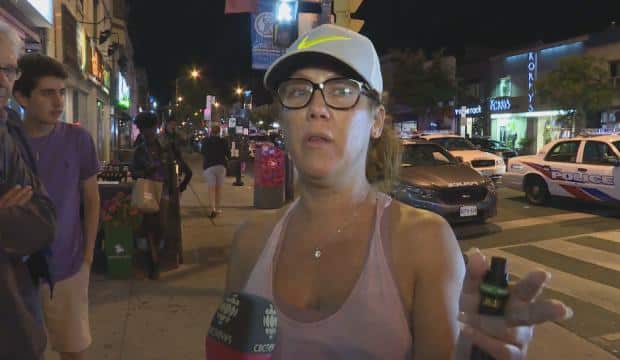 This witness tells us what she saw

Toronto Police Chief Mark Saunders said 16 people were shot in total, including the gunman. Police say the other victims were sent to hospital with "minor to life-changing injuries."

The slain woman has been identified as Reese Fallon, of Toronto, by Liberal MP Nathaniel Erskine-Smith, who represents a nearby area. Fallon was associated with a young Liberals group in the area.

Police said the 10-year-old victim was from the Greater Toronto Area and added in a statement Monday evening that the family did not want her name to be released at this time.

Authorities say the gunman, identified as Faisal Hussain, 29, died after a gunfight with police. Investigators are working to determine his motive.

Jo-Anne Saunders, who has no relation to the police chief, told CBC News she thinks saw a young girl get shot — and she hasn't been able to stop thinking about it since.

"She was across the road. There were a few ice cream parlours there so there was just groups of families eating ice cream," she said.

Mayor John Tory says he is reaching out to the province and the feds to sit down asap and discuss guns and public safety. So far this year, there have been nearly 60 homicides in Toronto. About half are gun related. In all of 2017, there were 66 homicides. <a href="https://t.co/08L3WK1VOR">pic.twitter.com/08L3WK1VOR</a>

Laurie Gutmann was at Christina's restaurant on Danforth Avenue when he heard gunshots and scrambled for cover at the back of the room.

In a Facebook post, Gutmann said he saw a wounded woman on the patio, screaming for help.

"She had been shot in the back of her thigh," said Gutmann, who had been at the restaurant celebrating his partner's birthday. "Her blood was all over the ground. Together with some of the staff, we helped bring her safely inside so she could lay down on a bench and we could try to help as best as we could."

Two doctors — a married couple who had been eating at Christina's — tended to the woman, while one of the servers held her hand, Gutmann said.

"I called 911 but the lines were so busy, I couldn't even get through," he said.

His partner, Jody Steinhauer, was able to contact emergency services through social media, to tell them there was a shooting victim at the restaurant, he said.

"A member of Toronto Fire Service arrived and was followed very shortly thereafter by an entire team of first responders including paramedics, police and fire service people [who] put the victim on a gurney and rushed her to hospital," Gutmann said.

Lenny Graf went for dinner at The Friendly Greek restaurant with his wife, their nine-year-old son Jason and one of Jason's friends Sunday night and took the kids to play by a fountain in a parkette at Danforth and Logan avenues.

"I heard what I thought were firecrackers and then when I noticed that people started to get scared and run away and duck I realized there must be some sort of shooting," he said.

"My first instinct was to try and find Jason and I saw him crouched behind the fountain." Graf said, adding his son was three metres from the gunman.

When Graf saw the man stop shooting and begin to walk away, he grabbed his son and took him through an alleyway, to the back of the restaurant, where his wife and his son's friend had taken shelter. They stayed in the restaurant until police arrived and were told it was OK to come out.

Nick Balkos said he saw the shooter about 15 minutes after he had closed his restaurant.

"He was running across the street yelling something and then he fired six to 10 shots into the Second Cup," Balkos said. "He was shooting while he was running."

Another witness, known only as Jeff, described driving by and seeing the shooter pull a gun and fire into a restaurant in the area.

"The shooter approached and he was facing the cafe he pulled out a black gun and started shooting at the window just as we were passing him," he said. "We saw the glass shatter. I didn't stop to see if he shot anybody but I saw people were fairly close to the window and I assume somebody got hurt.

"He would zig-zag across the street he would just head for a group of people and start shooting some easy targets."

As terror erupted in the neighbourhood, two frantic and injured people were running toward Tanya Wilson's door.

Wilson runs Skin Deep Tattoo studio on the Danforth. She was on the way out of her shop when she heard the crack of gunshots. Then she saw two people running to her door, bleeding.

"They had been shot so I brought them down stairs, put on some gloves and tried to take care of it as best I could," she told CBC News. "I shut the lights off and locked the doors because I didn't really know what was going on and I didn't know if the person would follow them into where they ran."

While chaos reigned outside, Wilson was making makeshift tourniquets for the pair. She believed they were mother and son. They had each been shot in the leg.

"I just went to the back and grabbed some articles of clothing, and just tied above their wound really tight, told them to relax. I was kind of freaking out yelling at them … just because I wasn't really sure what was going on and everything was happening extremely fast," Wilson said.

"The police came first and we took the piece of clothing, that I tied the legs with, off and I tried to find cord so to tie it off better and tighter. So we wrapped their leg with I think extension cord, I'm not really sure, speaker wire or something. And we were just trying to all work together I guess. And then paramedics came took care of them ... and took them out. 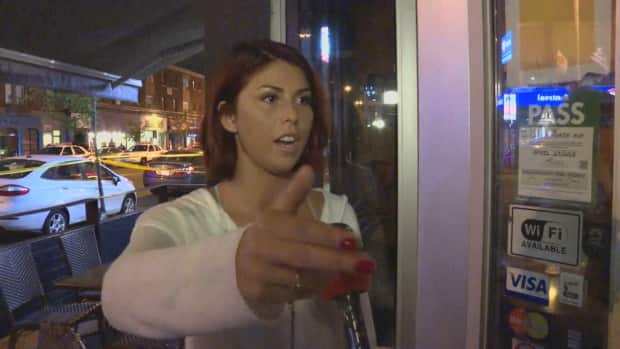 3 years ago
1:18
'And then he came in the restaurant and he shot the girl right in front of me,' says restaurant patron. 1:18

The police chief urged the public to share any information they have about the shooting, including video of what happened. He said police don't know what prompted the attack but are investigating all possibilities.

"I'm looking at every single possible motive for this," he said. "When you have this many people struck by gunfire it's a grave concern."

He said no officers were injured.