A Toronto crossing guard is told to stop dancing while on the job out of concern that she could be distracting drivers. 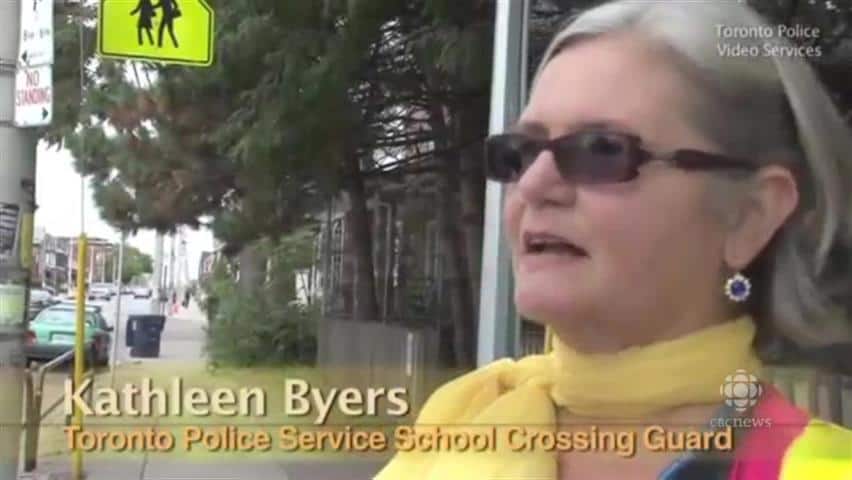 A Toronto crossing guard has been told to stop dancing while on the job out of concern that she could be distracting drivers.

Kathleen Byers is known for dancing back and forth across Dufferin Street, south of Dundas Street West, to music from a boombox, which she wears slung over her shoulder.

The 64-year-old former fitness instructor and self-described “ham” is a hit with the local kids, but police aren’t as amused.

The Toronto Police Service — which once produced a short video about Byers — says she isn’t following procedure and her dancing may be distracting to drivers.

“You have to be aware of what's happening at the intersection at all times. That means you need to be focused,” Const. Clint Stibbe told CBC News.

Byers stands by her record. She says she’s never had an accident in her 10 years on the job.

“I feel a big chunk is cut out of my life” not being allowed to dance, she said.

Byers says she will turn down her music and continue to dance while on the sidewalk, but not on the street.

Some of the neighbourhood kids are speaking out against the ban. Eight-year-old Stella Horvath has collected 300 of her classmates’ signatures on a petition calling for the ban to be lifted, which she plans to present to the police.

“I don’t think it’s fair because she never did anything wrong,” said Horvath.

With files from CBC's Michelle Cheung