How this adorable Toronto-area dance trio got on Ellen

Three young Toronto-area dancers impressed U. S. talk-show host Ellen DeGeneres and busted a move on her show this week.

Next step: come up with a group name

They busted a move in a special video, attempting to win over Ellen DeGeneres and find a way onto her show.

In the original video, three Toronto-area girls, aged just eight, nine and 10, dressed up as Ellen and mimicked some of her moves.

Then during her show broadcast on Monday, they brought a fun, high-energy routine that earned them a standing ovation from the studio audience.

Ellen DeGeneres is known for shining the spotlight on talented young people and there's no question these girls have plenty of talent.

Khiyla Westcott-Schram, eight, is from Barrie, while Ajenae Stephenson, 10, and Naima Phillip, nine, both live in Brampton.

Pint-sized Ajenae is front-and-centre in their routine, her ponytails bouncing. She excitedly explains how this all happened: thanks to their choreographer, they posted a video, tagging Ellen. "and then Ellen saw and was like... I want these kids on my show."

All three have been dancing most of their lives, but only started dancing as a trio a few months ago. 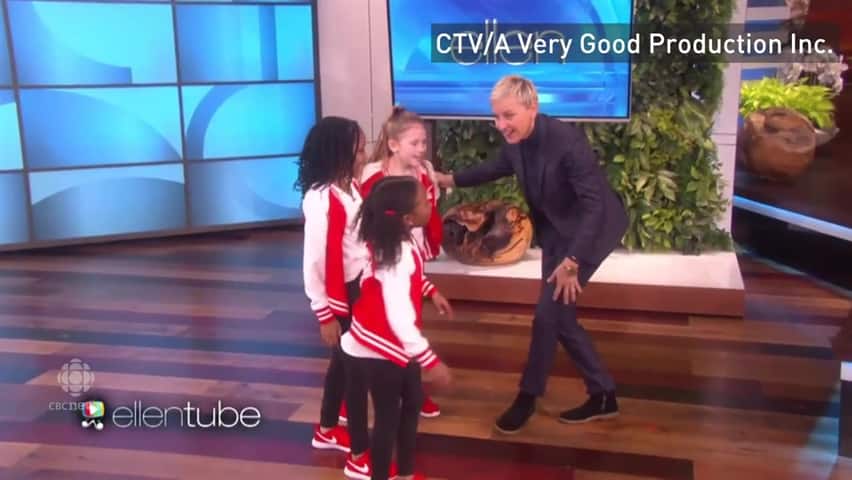 4 years ago
1:56
Ajenae Stephenson,10, Naima Phillip,9, Khiyla Westcott-Schram explain how they got the chance to dance on Ellen. 1:56

They learned the routine in 1 day

They had to really boogie to pull together the dance they performed for Ellen's show: "We learned it one day and had to shoot the next day," says Naima. "And then, we're in L.A.!"

Khiyla describes what is was like actually dancing on the stage they'd seen so many times on TV: "You walk out there and you're like, I don't think this is real, I'm dizzy, but you know it's real."

A proud moment for their moms

For Khiyla's mom, Michelle Westcott, it was emotional. "I'm known to cry at everything," she laughs. "Before they even hit the stage I started crying. Kind of like you knew it was real then."

Naima's mom Natalie Phillip couldn't hold back the tears that day, either. "You realize... they're actually getting to do what they love and with people they love."

All three of their mothers say this isn't a future they're pushing for their girls, but that the three love to dance.

Their TV appearance has brought one level of fame already.

"My daughter had her first fan experience in the bathroom at school yesterday," recounts Ajenae's mom, Shelly Callaghan. Her daughter could hear kindergarten children outside in the hallway excitedly talking about her, then they nervously said, 'Hi' when she walked out. "So that was exciting!" laughs Callaghan.

The three plan to keep performing together.

Next up is searching for a name for their dance troupe.

Lorenda Reddekopp is a news reporter for CBC Toronto.