'It was not a cover-up': Police chief faces mounting questions over Dafonte Miller case

Toronto police Chief Mark Saunders denied Wednesday that a delay in notifying the province’s Special Investigations Unit about an alleged beating of a young man by an off-duty officer constituted a cover-up, but said if a probe of the incident provides the force an opportunity to do things differently then “we will do differently.”

Toronto police Chief Mark Saunders denied Wednesday that a delay in notifying the province's Special Investigations Unit about the alleged beating of a young man by an off-duty officer constituted a cover-up, but said if a probe of the incident provides the force an opportunity to do things differently then "we will do differently."

Saunders and Mayor John Tory faced repeated questions about the incident when attending a party at police headquarters to mark the launch of the Caribbean Festival.

The case involves Toronto police Const. Michael Theriault, who has been charged with aggravated assault, assault with a weapon and public mischief in connection with the alleged beating of Dafonte Miller. The 19-year-old was allegedly run down and hit repeatedly with a steel pipe by two men in Whitby in December 2016.

Miller suffered a broken nose, jaw and wrist and is awaiting surgery to remove an eye injured in the incident.

Julian Falconer, the lawyer representing Miller, has said it was his office that alerted the SIU to the case, and that it was not Toronto or Durham police officers that did so.

Saunders said Wednesday his officers were called by Durham police about the incident.

The SIU investigates incidents involving police officers that result in a serious injury or death, or include allegations of sexual assault.

'My officers acted in good faith'

Saunders was repeatedly asked Wednesday about whether the public might view the four-month delay as part of a cover-up or an attempt to protect someone involved in the incident.

He replied that the issue comes down to whether an off-duty officer identifies himself or herself during an incident.

"I'm sure if there's paperwork that talks about the occurrence, and if that paperwork states that the person identified himself as an officer, then we've got an issue, we definitely have an issue," Saunders said. "But to say that this is a cover-up is misleading. It was not a cover-up. My officers acted in good faith." 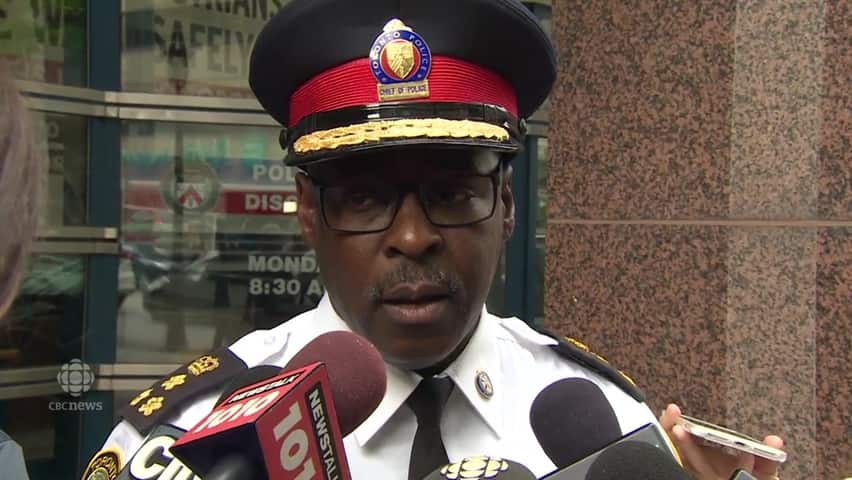 3 years agoVideo
0:58
Toronto police chief Mark Saunders was pressed with questioned about the Dafonte Miller outside of Toronto police headquarters. 0:58

Later Wednesday, Falconer said it is clear on the recording of the 911 call Miller made during the incident that Theriault identifies himself as a Toronto police officer with 42 Division and that he is placing Miller under arrest.

Asked about Saunders's contention that it must first be determined whether Theriault identified himself as an officer during the incident, Falconer said he finds those comments "troubling."

"First, it tells me that the chief of police, with all due respect, hasn't done his homework," Falconer told CBC Toronto Wednesday. "The rules are clear. If an off-duty officer identifies himself as a police officer, the rules are black and white that SIU must be called."

A confidential report into the incident will be discussed at Thursday's Toronto Police Services Board meeting, a discussion that will likely be held in-camera in the morning. The public portion of the meeting is scheduled for Thursday afternoon.

Lawyer calls for release of 911 tape

Falconer said the confidential debrief is a normal part of the process. However, he said the head of the board should make a public statement soon. And he called for the release of the 911 tape.

Asked Wednesday about whether the 911 tape can be pulled to determine whether and when Theriault identified himself as an officer, Saunders replied: "You're making policing sound very easy and obviously there are a lot of moving parts to it."

Both on Tuesday and again on Wednesday, Tory said he has read the confidential report but would not discuss the details.

"I have some concerns, there are some unanswered questions and we will start to take those up tomorrow," Tory told reporters Wednesday.

Asked whether he has concerns that the SIU was not notified immediately, Tory noted that some questions will have to be answered in court.

"What I know of this process so far in terms of the different comments that have been made and the short reports that I've read indicate that there are some very serious unanswered questions about the process and about the incident itself," Tory said.

'There needs to be an explanation'

Asked Wednesday whether the Miller case compromises efforts that Toronto police have made to repair their relationship with the black community, Saunders said the accused must first answer to the charges before the force looks at what it may do differently.

He said that the force's own investigation into the incident "will be fair, it will be transparent and it will be fully and thoroughly investigated from all angles." Saunders said the report from that investigation will be made public.

Another man, Christian Theriault, who Falconer has said is Michael Theriault's brother, has been charged with the same offences in the case. The SIU has alleged they "acted together" and will be tried at the same time.

Both Theriaults are expected to appear in Oshawa court on August 10.

With files from Adrian Cheung