Cy Tokmakjian's family called on Cuba to release him from prison, citing his innocence on corruption-related charges and a desire for the 74-year-old Canadian businessman to be reunited with his loved ones. 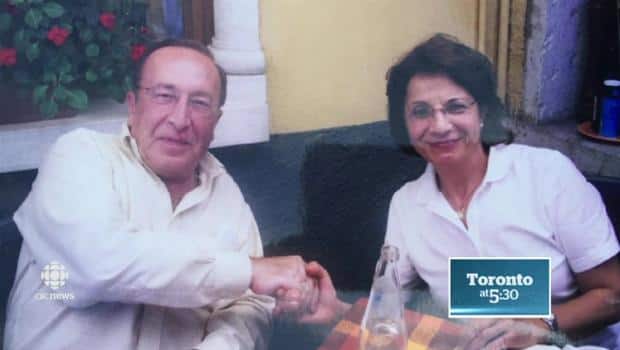 The family of Canadian businessman Cy Tokmakjian is calling on Cuba to release him days after he was sentenced to prison, citing his innocence on corruption-related charges and a desire for the 74-year-old to be reunited with his loved ones.

"I want my husband and my children's father and my grandkids' grandfather to be home as soon as possible," the businessman's wife, Helen Tokmakjian, said Monday.

Speaking to media alongside her children, Tokmakjian said "he's innocent."

Cy Tokmakjian, who owns the Ontario-based Tokmakjian Group, was one of several foreign executives swept up in a Cuban campaign against corruption in 2011. He was handed a 15-year sentence on Friday.

During an emotional news conference in Vaughan, Ont., on Monday morning, Raffi Tokmakjian said his father is innocent and determined to fight for his freedom.

He hasn't seen his father in three years, but described him as a proud man with "the utmost integrity."

"Every time he calls he reminds us, he says, 'I've done nothing, you know that. Everybody knows that. You cannot stop fighting for what's right,'" Raffi Tokmakjian said.

"'They've already taken three years of my life, but I will not admit to anything I have not done.'"

The company's Cuban offices were raided in 2011 as Cuba launched an anti-graft drive that has swept up foreign business executives from at least five countries, as well as government officials and dozens of Cuban employees at key state-run companies.

Tokmakjian, who has a home in Havana, was arrested in September of that year along with two other company executives and charged with corruption, conducting unauthorized financial transactions and illegally taking large amounts of money out of the country.

'Not an isolated event'

Havana-based freelance reporter Abel Gonzales said companies like Tokmakjian's were raided and shut down, and their owners were arrested.

He disproved every specific allegation. They simply couldn’t find any hard evidence against him.— Conservative MP Peter Kent

"It was not an isolated event. It also happened with other foreign companies. It was part of the initiative of Raul Castro to fight corruption in high levels of the government," Gonzales said.

Foreign Affairs said consular services are being provided, and officials are in contact with authorities in Havana and continue to monitor the case closely.

Cuba's judicial system is known for speedy proceedings behind closed doors with little or no media access. Cuban officials have said little about the Tokmakjian case beyond announcing last year that the Tokmakjian Group's operating licence had been rescinded due to unspecified actions.

"He disproved every specific allegation. They simply couldn’t find any hard evidence against him."

Tokmakjian was given the 15 years without the benefit of a sentencing hearing, Kent said.

"Which is, I suppose, the ultimate chapter in this gross miscarriage of justice."

Kent said Tokmakjian's best chance could be a transfer to a Canadian prison to serve out the rest of his sentence, or the Cuban government could simply expel him.

Meanwhile, Tokmakjian's company has launched legal action against Cuba’s government over an estimated $100 million in assets it seized.