Cupid, the 2-legged puppy, left to die in the trash, fitted with prosthetics

Cupid — the pup with a heart-shaped nose — was tied up in a bag and left to die in the trash behind a Toronto building.

Look at that face.

Now consider that Cupid — the two-legged pup with a heart-shaped nose — was tied up in a bag and left to die in the trash behind a Toronto building.

Born without front legs, new prosthetics will give the eight-week-old pooch a shot at learning to walk. 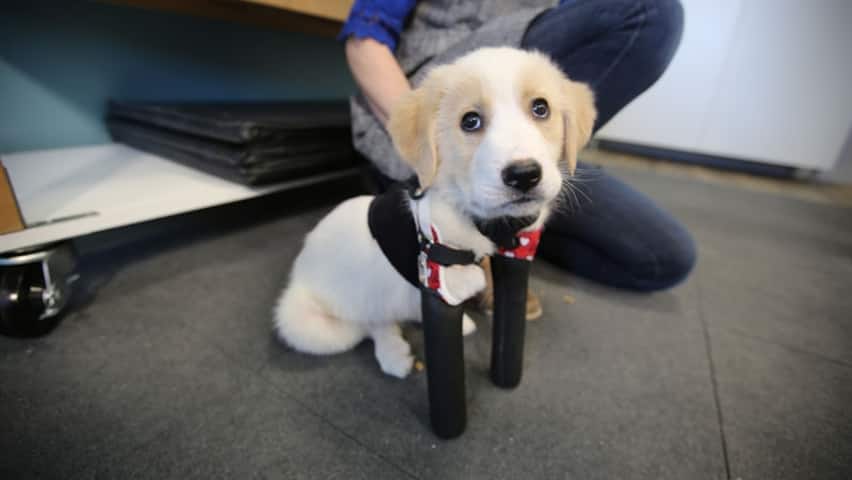 4 years agoVideo
1:42
Meet Cupid the two-legged puppy who was found in the trash and is now learning to move with prosthetic legs. 1:42

"The challenge for him is that he's never walked before," said Janice Olynich, a certified prosthetist and owner of PawsAbility, who fitted the pup with the prosthetics after he was assessed by a vet. Her Toronto-based business provides prosthetic and orthotic service for animals.

"It's not going to be instinctive for him to put these on and to immediately start walking. He needs strength, he needs balance, he needs co-ordination."

Cupid will wear the prosthetics for short sessions throughout the day to become familiar with his new legs, Olynich said. "With repetition and a lot of positive encouragement, I think this is going to be helpful to him."

The puppy, believed to be a Great Pyrenees cross, wears a suspension vest that hoists up the two aluminum struts that are covered with leather. There is a soft inner liner. 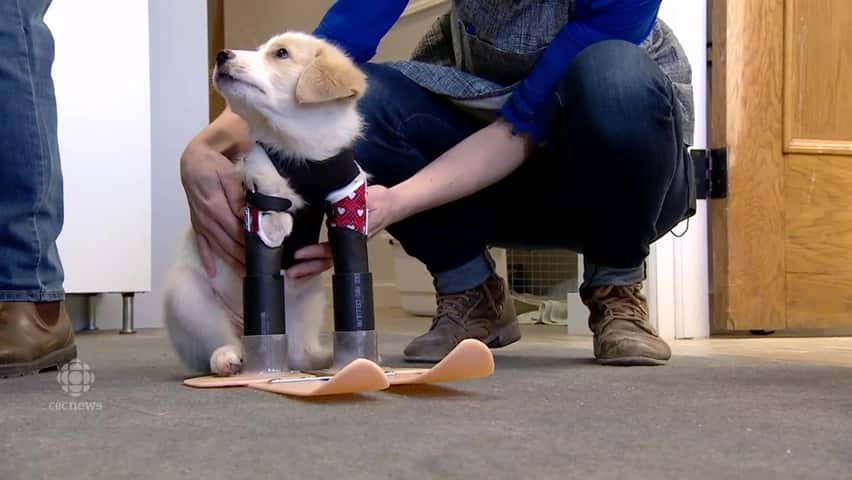 4 years agoVideo
0:25
Meet Cupid the two-legged puppy who is now moving around with prosthetic legs. 0:25

Right now, Cupid can stand in them and push himself forward with the addition of a ski-like device or "training wheels," Olynich said

"They're as light as they can be and as strong as they need to be," she said.

Joan Znidarec, co-founder of the Dog Rescuers Inc, said she's smitten with Cupid — as is everyone else. "I think he's Cupid because he's stealing hearts everywhere."

But Znidarec said she is appalled by what happened to the dog.

"The fact that he was dumped — I mean — that's inexcusable today. There's absolutely no reason to leave a life like that," she said.

Though Cupid had a rough start to life, he is now thriving and playful.

The dog will be up for adoption by the end of February, Znidarec said, adding her organization will continue to support Cupid and whoever adopts him.

"We're looking for a perfect fit for him, someone who obviously understands his needs," she said. "He's going to have a happy little life."