At Murray Johnston’s farm in Bala, about three hours north of Toronto, two of the fields are flooded and in one, a tractor combs the vines plucking the red and white berries. It will take workers several weeks to finish harvesting about 200 kilograms of fruit.

Most of the leaves have turned crimson or gold in Muskoka and even though the sun is out, the air is cool and crisp, making this the perfect time of year to harvest cranberries.

At Murray Johnston's farm in Bala, about three hours north of Toronto, two of the fields are flooded and in one, a tractor combs the vines plucking the red and white berries. It will take workers several weeks to finish harvesting about 200 kilograms of fruit.

"It's kind of the northern lemon," said Johnston with a laugh. "We can't grow lemons here but we can grow cranberries."

Fruit of the North

The tart berry is native to North America. It likes the cold weather. 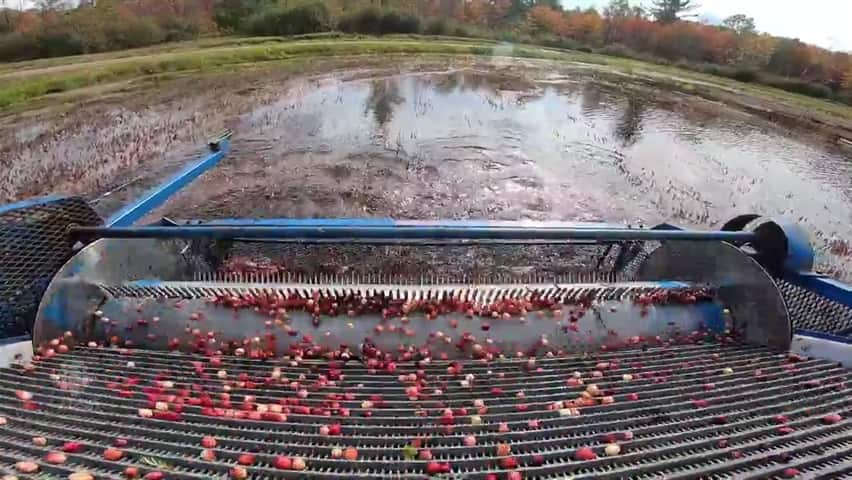 Take a look at how cranberries grow

1 year ago
3:11
Ontario farm grows cranberries and makes wine with the tart fruit. 3:11

"The cranberry is an interesting plant. It loves acidic soil and needs plenty of water... Muskoka is a perfect environment for that because we have lots of water, lots of peat bogs and a good climate. You go further south and it's too hot."

Johnston's family has been in the cranberry business since the 1950s. His farm is one of two in left in Ontario, producing only one per cent of the nation's cranberry fruit. There were a few other farms in the province but now most of Canada's cranberries are grown in Quebec and British Columbia.

In the 90s, after Johnston and his wife Wendy took the property over from Johnston's parents, they were hit with the harsh realities of the farming industry.

"We ran into some tough years in the late 90s. There was an overproduction and the price [of cranberries] fell," said Johnston.

The pair wanted to diversify and started looking into what else the fruit could be used for. Winemaking was something that always interested them, and since they were already selling their berries to wineries, they decided to give it a shot.

"At one point we thought maybe we'd overshot, so we were a little nervous when we opened our doors. We actually sold out in 16 days," said Wendy.

The pair hasn't looked back since. They're now making cranberry cider and have expanded their wine offerings to include mixes like cranberry blueberry wine, proving the cranberry isn't just the traditional accompaniment to Thanksgiving turkey.

"We also expanded to maple syrup and have an ice skating rink in the winter," said Wendy.

Not your traditional farm

The rink keeps Muskoka Lakes Farm and Winery open all year, but autumn is the busiest since visitors get to tour the grounds and watch the tractors pick the berries.

"When you plant [cranberries], it takes about five years for the beds to mature and start producing," said Johnston. "Our oldest beds are planted in 1953 and they're still producing today."

The numerous expansions mean that even when Mother Nature turns out a bad crop, the Johnstons aren't left scrambling.

"We have a poor crop this year… but I'm not worried about it because I know there's other sources of revenue that can support the families that live off our farm," said Johnston.

One of the biggest draws, is the cranberry plunge where visitors put on a pair of hip waders and jump into a pond filled with cranberries.

After the harvest is done, the Johnstons will flood all their cranberry fields so that the bushes can freeze and will be preserved during the winter.