WARNING: This story contains disturbing details. Pet owners in Halton Region are on edge after coyote attacks killed one dog and seriously maimed another. 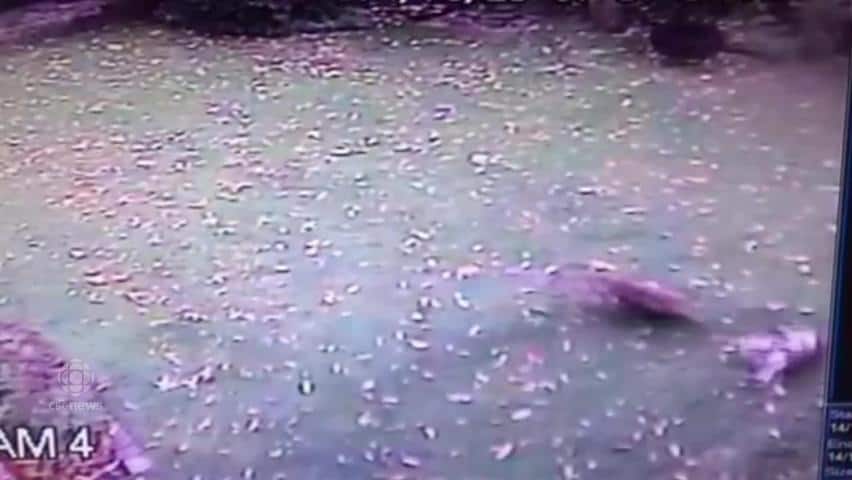 6 years ago
0:23
Surveillance video shows a near-fatal coyote attack on a dog in Burlington, Ont. 0:23

Pet owners in Halton Region are on edge after coyote attacks killed one dog and seriously maimed another.

Jenn and David Reid of Burlington, Ont., almost lost their brown-and-white cocker spaniel, Holly, last week when it was attacked in their backyard.

Jenn Reid saw the attack on a home security monitor.

“I saw something that caught my eye and realized there was a coyote in our yard and it had a hold of our dog,” she told CHCH.

The footage shows a coyote racing towards Holly. The two animals struggle off-screen before the coyote drags her into the middle of the yard, where it starts thrashing the much smaller spaniel. Some viewers may find the video, included with this story, disturbing.

Reid ran outside to confront the coyote, yelling in a bid to scare it away.

“I got onto the grass and got quite close to it before it let go of my dog, and then it finally took off, but it stopped at the edge of my property and just looked at me,” she said. “So it was quite bold.”

Rushed to the vet

Holly ran back toward Reid’s home as soon as she was free.

“The dog was crying and yelping and covered in blood,” Reid said.

The dog was rushed to a veterinarian, then to an animal hospital in Guelph.

“She had three or four puncture wounds in the neck and they said they were two or three inches deep,” said David Reid.

Holly survived but just a few days later, another dog was killed

Two years ago, an eight-year-old girl was attacked by a coyote in her backyard. Some schools in the region educate children about what to do in the event of an attack.

With files from Trevor Dunn