Toronto and its surrounding cities account for a disproportionately high number of Ontario's new cases of COVID-19, according to a CBC News analysis of provincial data on novel coronavirus infections.

More than 76% of province's new infections are in the GTA, CBC News analysis finds

Toronto and its surrounding regions account for a disproportionately high number of Ontario's new cases of COVID-19, according to a CBC News analysis of provincial data on novel coronavirus infections.

More than three-quarters of the active cases of COVID-19 currently listed in the province's database are found in the five public health units of Toronto, Peel, York, Durham and Halton regions, an area that accounts for less than half of the province's population.

This is a clear shift from the first month of the pandemic, when cases were more evenly distributed around the province, and that shift is prompting some experts to recommend that the province relax the lockdown in some regions, while clamping down in areas where cases are rising.

In early April, when Ontario hit 5,000 confirmed cases of COVID-19, Toronto and its four surrounding regions accounted for 52 per cent, according to the province's daily epidemiology reports. However, Toronto and the regions account for 76 per cent of the roughly 6,600 infections that have happened in May.

The new data lend further heft to arguments that the provincial government needs to consider a regional approach to the fight against COVID-19 in Ontario, something that Premier Doug Ford has resisted until now.

"To treat the province as one unit doesn't make a lot of sense," Dr. Michael Warner, medical director of critical care at Michael Garron Hospital in Toronto, said in an interview on CBC Radio's The Current.

"The number of COVID-positive cases is increasing, but I think the more important question is within the province of Ontario: 'Where are those cases actually located?'"

Ontario's total daily number of new cases headed on an upward trend from May 10. A closer look at the data shows a disproportionate share of those new cases is found in the five Greater Toronto Area public health units.

Of the 3,931 infections that have happened in Ontario since May 10, the GTA's public health units account for 3,054, or roughly 78 per cent.

WATCH | Nearly all new cases of the novel coronavirus in Ontario are in the GTA: 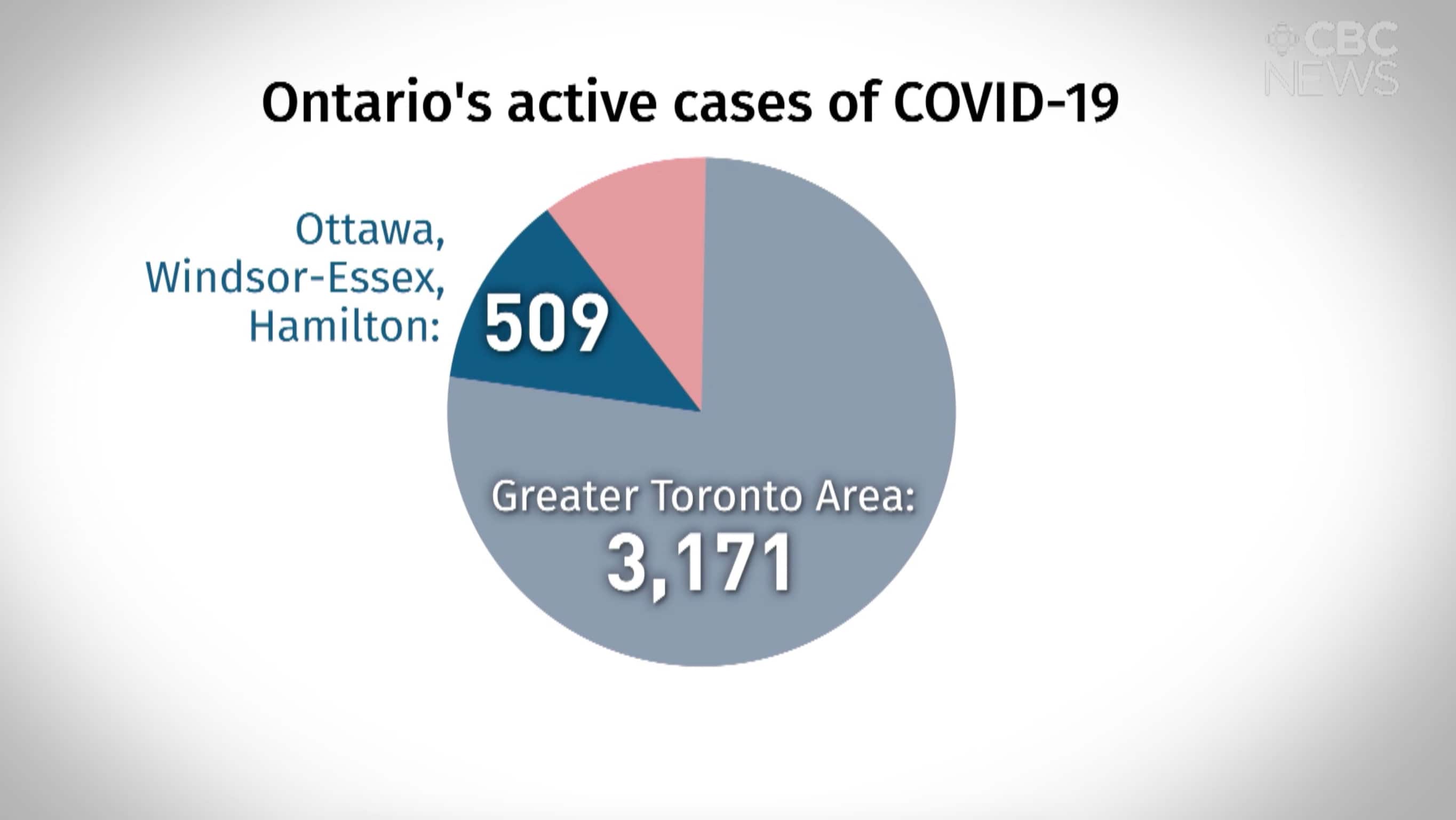 Nearly all new COVID-19 cases are happening in the GTA, Ottawa and Windsor

9 months ago
2:04
The COVID-19 pandemic in Ontario is now almost exclusively a problem in the province's big urban areas. Data analyzed by CBC News show nearly all new infections are happening in the GTA, Ottawa and Windsor. 2:04

The growth in new cases in Ontario since early May "is primarily a Toronto problem," Dr. Alon Vaisman, an infectious disease physician at the University Health Network, said in an interview with CBC News.

Vaisman urged provincial officials to look far more closely at the specifics of the data to craft the best pandemic response.

"If you go more deeply and you see a rise of cases in a certain demographic, either old or young, or certain regions, or certain profession, then you could really just tailor your approach to that problem," he said.

"If all you know is that it's a lot of cases in Toronto, it doesn't make much sense that in Kingston they should be shutting down parks."

The province's database on Tuesday showed 4,110 infections as "not resolved," meaning that the person is still considered infectious. The GTA's public health units account for 3,171 of those active cases, or roughly 77 per cent.

Outside the GTA, only a few urban areas continue to see a significant number of new cases. The Ottawa, Hamilton and Windsor-Essex public health units together with the GTA account for roughly 90 per cent of the province's new infections since May 10.

That's why a range of experts is suggesting Ontario's public health leadership focus its response more tightly on hot spots and consider allowing parts of the province that are largely unaffected to resume their economic activity more quickly.

That's the kind of approach being taken by Premiers François Legault in Quebec and Jason Kenney of Alberta. They are keeping restrictions in place longer in the hardest-hit parts of their provinces. In Quebec, that's the Montreal area, while in Alberta, it's the cities of Calgary and Brooks.

"Ontario is very diverse, so it doesn't make sense to have a policy that applies to the entire province if the entire province is not being affected," Dr. Jeff Kwong, an epidemiologist at the University of Toronto's Dalla Lana School of Public Health, said in an interview with CBC News.

"The policies that you bring into place in areas like the GTA could be different from, let's say, Sault Ste. Marie or Sudbury."

Lockdowns could look different from region to region, or reopening could occur at different stages in different regions, said Dr. Lauren Lapointe-Shaw, an epidemiologist with the University Health Network.

But that's not the approach favoured by Dr. David Williams, Ontario's chief medical officer of health.

"Let's say hairstyling in one [public health unit] is open and the others [are] not. So then everybody in this one just drives over, gets their hairstyle in that one, and so you bring all those infections over there," Williams said Tuesday during his daily news briefing.

Despite acknowledging the existence of COVID-19 "hot spots" in parts of the province, Premier Ford has rejected anything other than a pan-Ontario formula for imposing and easing the province's semi-lockdown.

"We need to stick together. We need to work together as a province," Ford said Wednesday during a news conference. "Why make a big divide now when we're getting through this?"

She said the government is getting "very important" information from local medical officers of health that will help guide the province in deciding when to move to the next stage of easing restrictions.