Toronto Mayor John Tory is calling for stricter enforcement of physical distancing measures amid the COVID-19 crisis, after the city received reports of many people not staying two metres apart in public places. 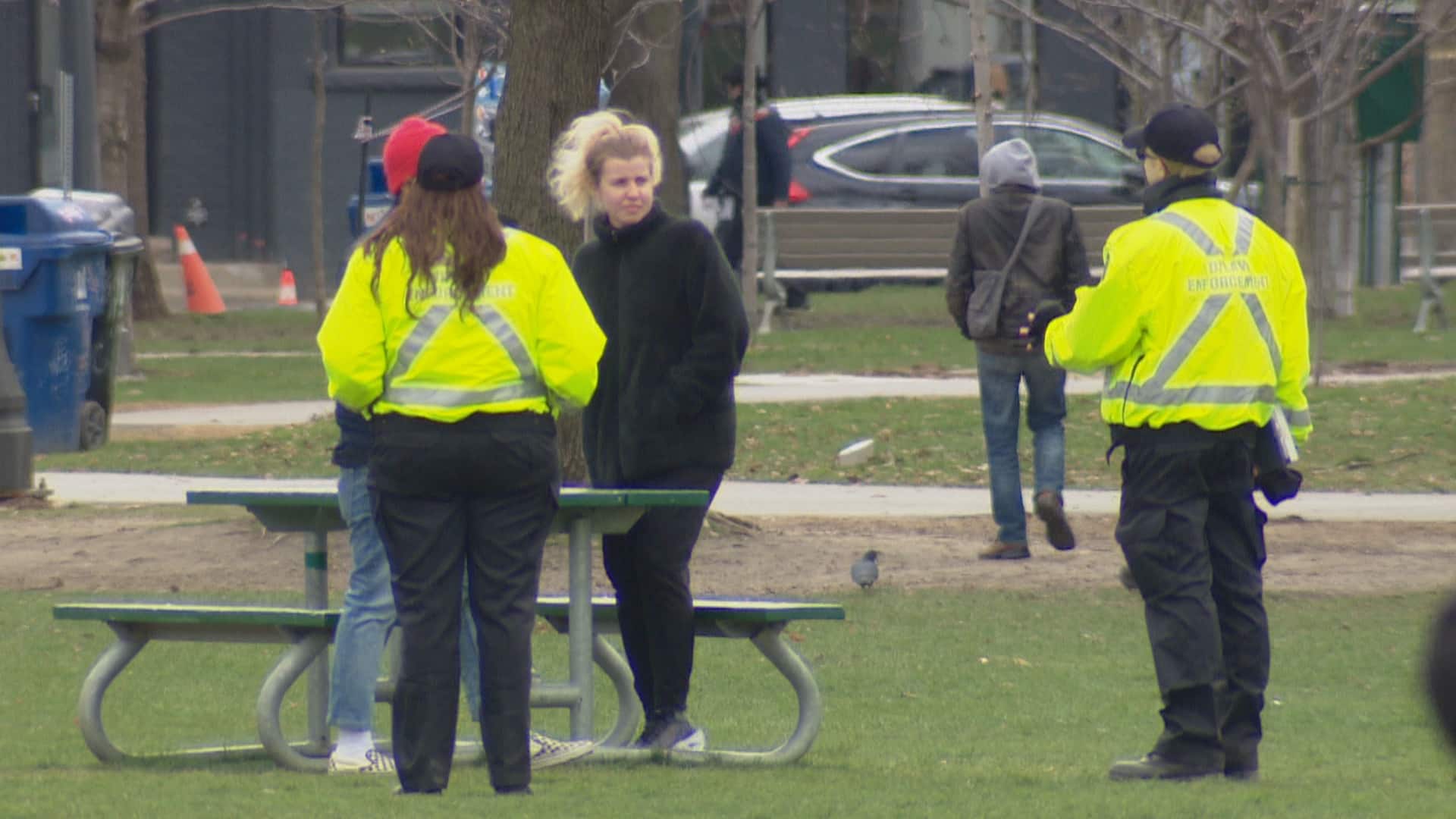 11 months ago
1:49
Toronto police are issuing fines of up to $1,000 to those who break physical distancing rules in public places. 1:49

Toronto Mayor John Tory is calling for stricter enforcement of physical distancing measures amid the COVID-19 crisis, after the city received reports of many people not staying two metres apart in public places.

The time has come for police to issue more tickets, Tory said, although he acknowledges he cannot direct law enforcement on how to enforce the law.

"We have reports of everything from bonfires on the beach to hanging out in groups in parking lots to playing pickup sports in closed areas, all of which involve groups of people who don't live with each other and thus could spread the virus," he writes in the letter.

Tory notes that most Toronto residents are respecting the city's new physical distancing bylaw to help officials stop the spread of the "deadly virus" but he said more co-operation is needed.

"While the vast majority of Toronto residents are keeping their distance and helping us fight COVID-19, your officers have given hundreds of informational talks, many warnings and some tickets to the worst offenders, which is the kind of enforcement we all wanted to see to the greatest possible extent."

Tory said an increase in enforcement would help to protect the health of the city and help the city return to normal.

'It's not really that complicated,' mayor says

In an interview by Skype on Saturday, Tory said people need to "wake up" and do what they have been asked to do.

"Stay home, first and foremost. If they have to go to the park, just keep their distance. It's not really that complicated or that difficult."

Tory said he is being told that hundreds of people are still being educated and given warnings about the bylaw daily.

"That suggests there are still a fair number of people who don't get what we're doing here and why we're doing it, which is to save lives and stop the spread of the virus," Tory said.

"As usual with most things, there is a minority of people who have decided that, for some reason, it doesn't apply to them, or they're not vulnerable, or they don't really care. And those are the people, I think, we're now going to have to get much tougher with and give them one of these big tickets in order to induce a change in behaviour."

Tory said he drove around to some of the hot spots on Friday and saw it for himself.

Saunders, for his part, told reporters in High Park later on Saturday that he spoke to the mayor on Friday and the police will soon have "zero tolerance" for people who refuse to respect the city's physical distancing bylaw.

"What we're now doing is we're moving past the education piece. The public is pretty aware of what we're asking for when it deals with physical distancing. What we're going to be doing is moving toward zero tolerance, with some common sense factors to it, effective today," Saunders said.

"Health is the number one issue why we're doing this. We know that we have a role to play in trying to flatten that curve for COVID-19. We are going to take the necessary steps to do just that."

With the help of city bylaw officers, Toronto police have issued 53 tickets, more than 2,500 cautions and 88 tags and towed four vehicles since an enforcement blitz began on April 2, the police chief said.

He added that police have noticed that fewer people are engaging in physical distancing when the weather is warm. He said police have seen several families gathering together on numerous occasions and they "just don't get it."

"We have to do everything we can to make the message loud and clear. Success would look like emptier parks and us flattening the curve and health-care workers not being compromised."

Saunders said anyone who breaks locks on closed park equipment, or removes barricades, could face a charge of public mischief. He said "our mission is not to issue tickets" but police will issue tickets and lay charges if need be.

Police can issue tickets up to $1,000 if people who don't live together are closer than two metres apart, according to a city bylaw.

COVID-19 has killed 79 people in Toronto

A total of 79 people have died of COVID-19 in Toronto. The city has reported 2,065 cases of the virus as of 12:30 p.m. on Saturday. A total of 105 people have recovered and there are 58 outbreaks in institutions, the city says.

On Friday, the city received 550 complaints about people using amenities that have been closed or not practising physical distancing in parks. The amenities include off-leash dog parks, playgrounds, fitness stations, skateboard facilities and parking lots.

City bylaw officers spoke to 770 people about the closure of parks' amenities and physical distancing and issued 32 written cautions and 11 tickets. That means the total number of tickets issued by the city since April 4 is 79.

This weekend, the city said its COVID-19 enforcement team is conducting what it calls "co-ordinated enforcement efforts" to target parks where people have been seen to be congregating.

"Residents are urged to stay at home and keep their distance from others during this weekend's holidays, leaving only for essential reasons," the city said in a Friday news release.

With files from Muriel Draaisma, Ieva Lucs, The Canadian Press