A Mississauga, Ont., senior who relies on provincially funded home care was left soiled in his bed for days after he and his wife became ill with COVID-19 nearly two weeks ago and care workers stopped showing up.

A Mississauga, Ont., senior who relies on provincially funded home care was left soiled in his bed for days after he and his wife became ill with COVID-19 nearly two weeks ago and care workers stopped showing up.

Simon David, 74, a former mechanical engineer, suffers from late-stage dementia and the effects of a stroke that left him bedridden and unable to feed himself.

It takes two trained health-care professionals to secure Simon in a lift so he can use the washroom and be cleaned.

For six days, starting on Dec. 31, his publicly funded pair of personal care workers didn't visit. Instead, his wife, Cristina David, who was feeling sick, had to try to care for Simon herself.

"It's inhumane.... This shouldn't be happening," she said. "This was our greatest time of need."

On New Year's Eve, the day Cristina tested positive for COVID-19, her husband started to show symptoms as well. Health authorities told her that Simon was presumed to be infected, too.

Cristina said she immediately alerted the two agencies that provide care for her husband, the Mississauga Halton Local Health Integration Network (LHIN) and the Victorian Order of Nurses (VON). That afternoon, she said, the two agencies held a conference call with her and advised that her husband's home care would be stopped.

"They told me immediately that they will cancel the services when I disclosed that I was infected," she told CBC News.

Cristina said she's filed a formal complaint with the LHIN and her representative at Queen's Park over the agencies' handling of the situation.

Both agencies told CBC News they can't comment on the couple's situation directly due to privacy regulations.

The Mississauga Halton LHIN is a publicly funded agency that contracts nursing and personal support work to VON.

In an emailed statement to CBC News, VON spokesperson Rosie Michel said staff are well trained in the use of personal protective equipment, but that sometimes staffing issues arise.

"There are sometimes circumstances in which either clients and their families/caregivers, or VON, or both, conclude that care cannot continue to be provided by the VON care team," Michel said.

"Generally speaking, if a member of a client's main VON care team isn't available for any reason, VON works with clients and families/caregivers to ensure a contingency plan is in place and that care can continue to be delivered."

Trying to make it work

Last April, Cristina moved her husband out of a long-term care home because she was so concerned about the quality of care and the spread of COVID-19.

Prior to Dec. 31, two personal support workers from VON would arrive at the Davids' home twice a day. In addition to securing Simon in the lift so he could go to the washroom and be cleaned, they would also help feed him and give him his medications.

Cristina said when VON workers stopped showing up, she was too weak from COVID-19 to take care of her husband.

Simon was left in bed, soiled, for three days, she said.

Cristina said a VON case worker told her to take Simon to hospital if he became very sick, but he never did. 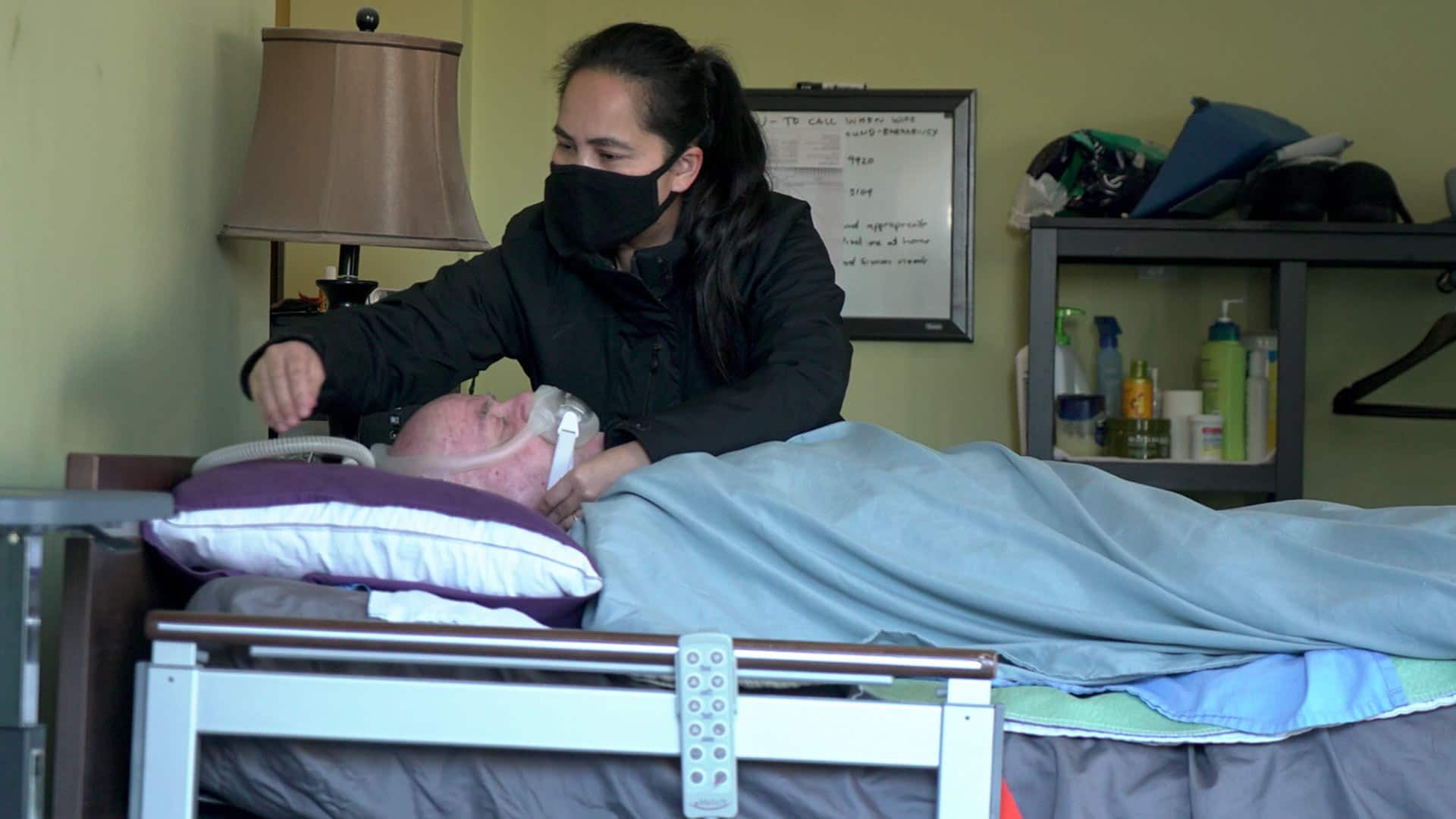 2 days agoVideo
2:04
An Ontario woman says home care for her bedridden husband was cut off after she informed the care agencies she had tested positive for COVID-19, leaving him stranded in bed, soiled, for days. 2:04

After three days without care workers, Cristina said she called her stepdaughter, Donnie David, for help to lift, clean and feed Simon.

"All I had were gloves and a mask. Feeding and changing him is a lot of close contact," Donnie told CBC News.

"They just assumed that since this was a house with an outbreak, that's where I got it from," Donnie said.

Cristina said she feels terrible about her stepdaughter's illness.

"This should not have happened," she said.

On Jan. 5, a lone care worker showed up and was unable to lift Simon out of the bed, Cristina said. Since then, care has been sporadic, she said, often with a single worker visiting the home.

She said she's been told full care for her husband will resume on Jan. 14, two weeks after the COVID-19 diagnosis.

Not a patient's responsibility to ensure care is coming

Alison Thompson, an associate professor at the University of Toronto specializing in ethical issues in health care, said the provincially funded Mississauga Halton LHIN and VON appear to have failed a family in crisis.

"The obligation is on the part of the home care provider to make sure the patients are being cared for," said Thompson.

"It's not the responsibility of the people who are very, very ill at the time to be filling the holes in their care. It's too much to ask, and it's really a failure on the part of the provider to meet the needs, and [they] are contractually obligated to do that."

Mississauga Halton LHIN spokesperson Laura Zilke said the agency has reached out to other health-care suppliers to help meet the needs of clients during the pandemic.

"Care providers continue to provide essential nursing, therapies and personal support services to individuals who require these home care services to remain in their home, regardless of whether the client is [COVID-19] positive or negative," she said in an emailed statement.

Donnie said it's been heartbreaking watching her stepmother struggle to provide care.

"I honestly feel like they abandoned [my parents]," she said.