Premier Doug Ford is facing accusations of using the response to COVID-19 as a guise to advance his political interests by adding unrelated measures to legislative bills that contain pandemic measures.

Premier Doug Ford is facing accusations of using the response to COVID-19 as a guise to advance his political interests.

Two new pieces of legislation that the government portrays as helping the province recover from the effects of COVID-19 contain provisions unrelated to the pandemic.

The government's proposed Better for People, Smarter for Business Act — framed as boosting the economy by reducing red tape — would transform Canada Christian College into a university with the power to grant bachelor of science and arts degrees.

The college is run by the prominent conservative evangelical pastor Charles McVety, a staunch ally of Ford and opponent of previous Liberal reforms to Ontario's sex education curriculum.

On Tuesday afternoon, the government tabled a separate bill to shield organizations from legal liability for spreading COVID-19, provided that they tried to follow public health guidelines. Included in that bill is legislation to ban Ontario municipalities from using ranked ballots in the 2022 elections for mayor and council.

"To the extent that they're using the pandemic as cover for these controversial initiatives, it just stinks to high heaven," said Emmett Macfarlane, an associate professor of political science at the University of Waterloo.

The politics of omnibus bills

Governments of all political stripes — both at Queen's Park and in Ottawa — have long used so-called omnibus bills to pass measures without the level of scrutiny they would receive in standalone legislation.

By putting unrelated items into bills that are supposed to be about COVID-19, the Ford government's tactics could be considered worse than the typical omnibus bill, says Macfarlane.

"It does make one wonder to what extent the government was trying to sneak certain controversial amendments through," he said in an interview with CBC News.

The move to give Canada Christian College university status is coming under fire in large part because of McVety's political ties, his stance on sex ed and his views on same-sex marriage.

The Progressive Conservative campaign team selected McVety to be among the few attending the first leaders' debate in the province's 2018 election campaign. The reverend sat with some of Ford's top advisers. McVety did not respond on Wednesday to CBC's requests for an interview. 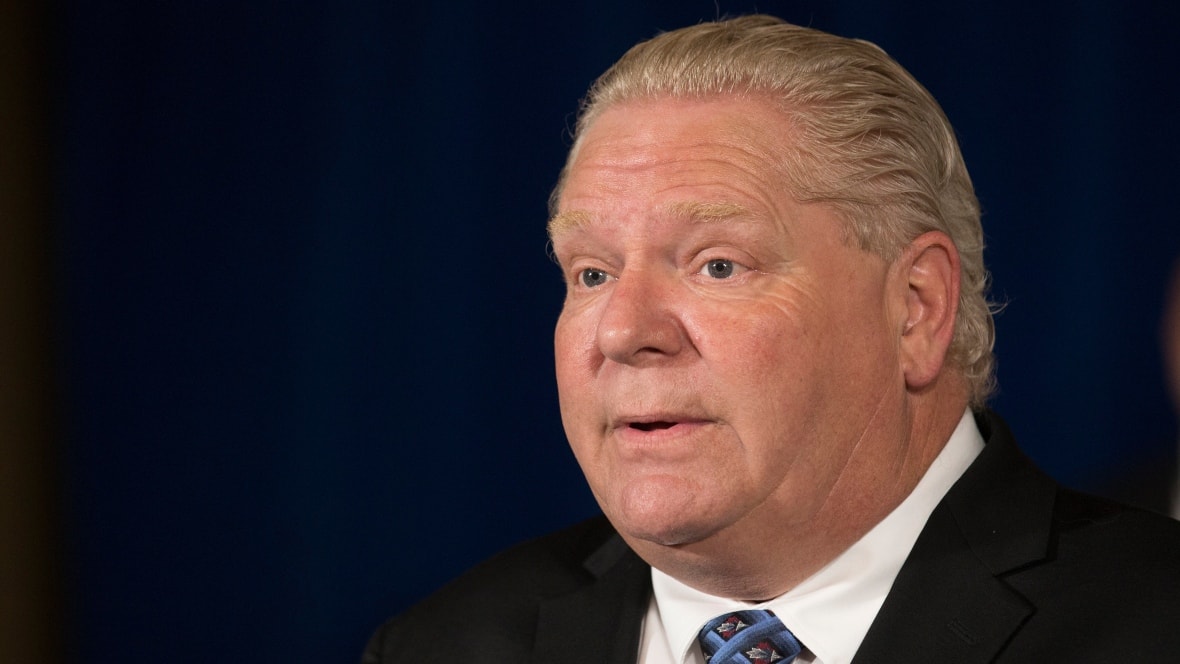 "I have a lot of friends within churches and in colleges," Ford said Wednesday when asked about McVety. "He went through the process like every other college, and the process is independent."

The province's Postsecondary Education Quality Assessment Board, the independent agency that considers applications for new degree programs and makes recommendations to the minister for approval, is in the midst of considering two applications from Canada Christian College.

One of the applications is to change its name to Canada University and School of Graduate Theological Studies. The other proposal, submitted last month, is to create new Bachelor of Arts and Bachelor of Science degree programs. In both cases, the board is yet to make any recommendation for approval.

A spokesperson for Colleges and Universities Minister Ross Romano said the college's applications are currently under review by the board and said the legislation will not come into effect until after the reviews are complete.

The college seems to think approval for the arts and science degrees is in the bag.

"The present legislation governing the college has disallowed further enhancements of our educational offerings in the liberal arts and sciences," says the college's 2020-25 academic plan. "We expect this situation will be rectified in the coming months."

Canada Christian College currently has the legal authority to grant degrees only in such fields as theology, religious education and Christian counselling.

"Charles McVety has a history of making Islamophobic and homophobic statements and for using Canada Christian College, of which he is the president, to host Islamophobic speeches," the NDP's anti-racism critic, Laura Mae Lindo, in question period this week.

"Why does this government continue to use the cover of a pandemic to make good on back room deals with the Premier's friends?" Lindo asked

The province is "establishing an equal playing field for our post-secondary institutions to compete and attract world-class talent from around Ontario and abroad," said  David Piccini, parliamentary secretary to Romano.

Canada Christian College "simply isn't on par with any other university in the province," said Macfarlane. "This seems to be nothing more than a reward to a friend of the premier in a bill that that is presumably about COVID."

The government is also facing criticism over its other recent move to insert unrelated legislation into a COVID-focused bill: scrapping ranked ballots at the municipal level.

In that system, voters rank all candidates in an election instead of simply choosing just one. If no one is ranked first on 50 per cent of the ballots cast, the candidate with the fewest votes is eliminated, and their votes go to the second-ranked candidate on each ballot. The process is repeated for multiple rounds until someone surpasses 50 per cent of the votes.

London used ranked balloting in its municipal election in 2018. Voters in Kingston and Cambridge approved plans to switch to the method for 2022, and other municipalities have been considering such reforms.

The existing first-past-the-post system typically sees candidates win with far less than 50 per cent of the vote, but ranked ballots are "a small and simple change that make local elections more fair and friendly" said Dave Meslin of Unlock Democracy Canada, an electoral reform advocacy group.

Ontario's existing legislation for municipal elections "lets cities decide if they want to use ranked ballots or not," Meslin said in an interview with CBC Radio's Ontario Morning. 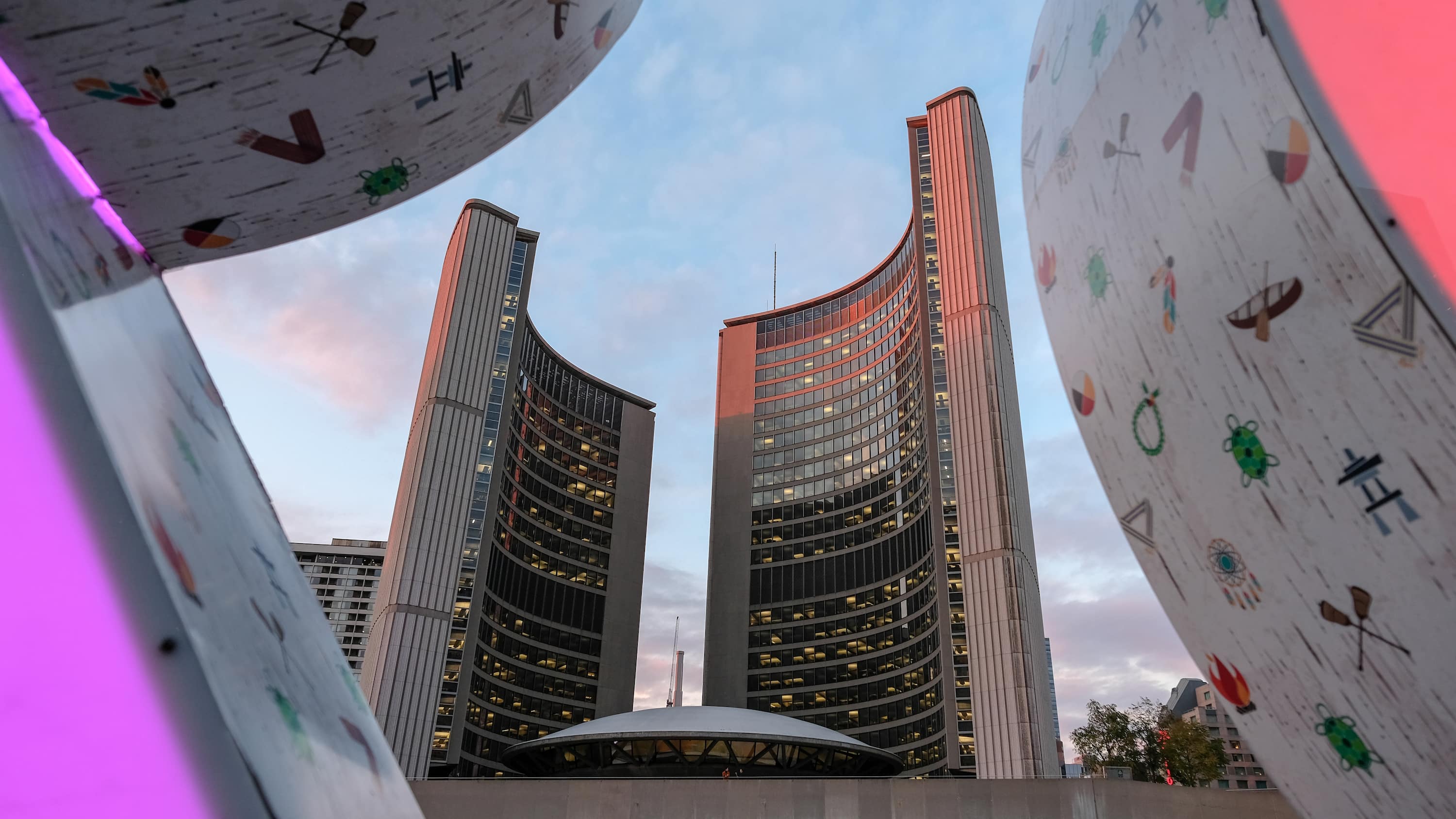 The importance of ranked ballots explained with fruit

1 month agoVideo
1:59
And why a former city council candidate says the Ford government’s move is robbing Toronto of better representation 1:59

"What Doug Ford is doing is more of an iron fist approach, saying, 'Well, we're just going to ban ranked ballots. No one is allowed to use them anywhere.'"

Ford says first-past-the-post is simple and voters "don't have to be confused" by another system.

"We've been voting this way since 1867. We don't need any more complications of ranked ballots," the premier said Wednesday.

"This is another gross abuse of power from a government that continuously undermines local democracy with snap decisions," said Green Party leader Mike Schreiner in a statement. "These overnight changes totally disrespect the rights of municipalities to improve democracy and encourage diversity on city council."

There's some evidence the government was hoping the move would slip under the radar.

The day before the legislation was tabled, officials with the attorney general provided multiple media outlets (including CBC News) with advance copies of the news release, so that stories about the COVID-19 liability protection measures could be published as soon as the bill was introduced.

Those advance copies of the news release did not mention the provision to ban ranked ballots.