Premier Doug Ford is promising further restrictions coming for Ontario, as the province reported a record 4,249 new cases of COVID-19 on Friday. That number comes with the caveat that about 450 were attributable to a data upload delay from Toronto Public Health.

Premier Doug Ford is promising further restrictions coming for Ontario, as the province reported a record 4,249 new cases of COVID-19 on Friday.

That number comes with the caveat — about 450 were attributable to a data upload delay from Toronto Public Health.

Even so, that would mean about 3,800 were newly confirmed infections, considerably more than the previous record of 3,519 reported Thursday. The cases that were delayed were "primarily" from Jan. 5 and 6, the province said.

"We're in a desperate situation, and when you see the modelling, you'll fall out of your chair," Ford said.

"There will be further measures, because this is getting out of control."

Dr. Barbara Yaffe, Ontario's associate chief medical officer of health, agreed with that assessment. "I think we do need to consider more serious measures, perhaps similar to what happened in the spring," she said.

"Today's numbers, to be frank, are scary." 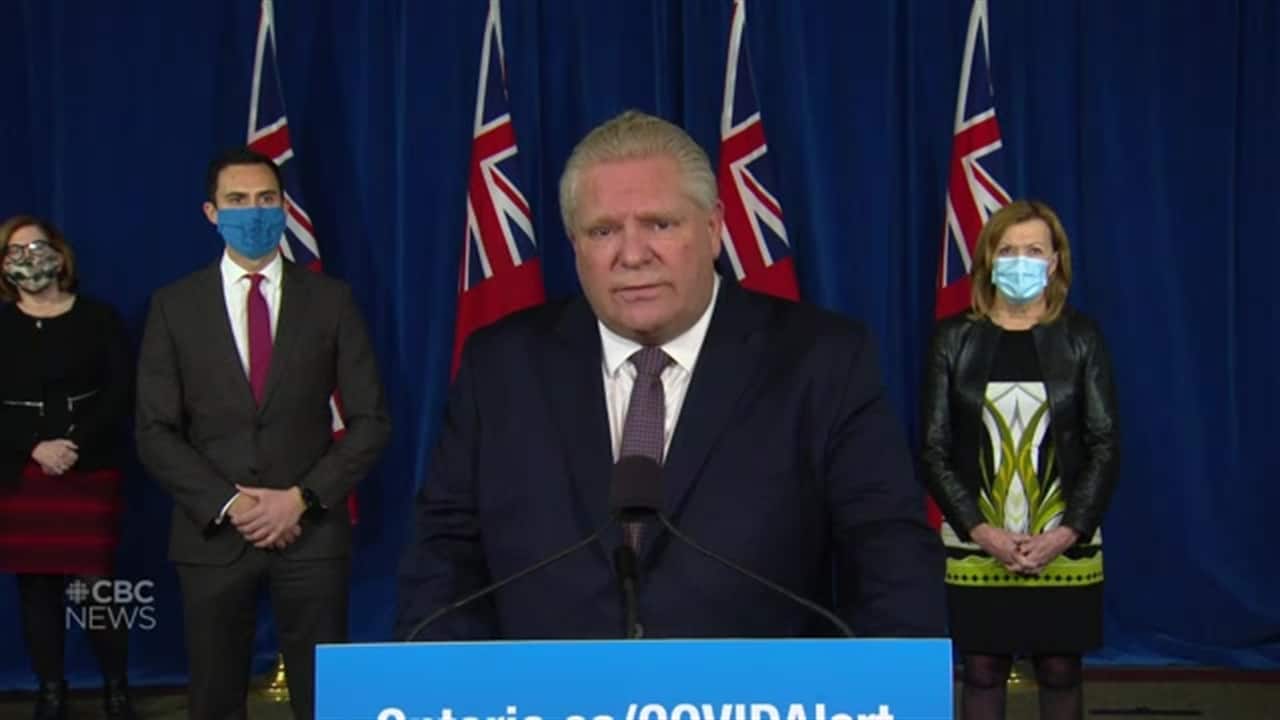 2 months ago
1:03
Ontario Premier Doug Ford says new models forecasting coronavirus cases will show the province is in 'a desperate situation' and he warns new measures are coming to try to curb the spread. 1:03

Combined, they push the seven-day average to 3,394, also a pandemic high for the province.

They come as Ontario's network of labs processed 71,481 test samples for the novel coronavirus and reported a test positivity rate of 6.2 per cent.

There are now 28,203 confirmed, active cases of the illness provincewide, the most at any point during the pandemic by a considerable margin.

"This is so, so serious," Ford said. "This is the most serious situation we've ever been in ever, ever, since the start of this pandemic."

While overall hospitalizations fell slightly to 1,446, the number of COVID-19 patients in intensive care and on ventilators both climbed to new highs — 369 and 250, respectively.

Meanwhile new data crunched by Ontario scientists with the Institute for Clinical Evaluative Sciences shows test positivity rates for some of the hardest-hit parts of the province are only worsening.

Residents of northeast Brampton with postal codes starting with L6P are testing positive for the virus at a higher rate than anywhere in the province.

But that number only grew after the provincewide lockdown, with the rate jumping to 23.7 per cent for the period Dec. 27 to Jan. 2. Rounding out the top three for that period are North York and northeast Scarborough.

Dr. Jeff Kwong, a senior scientist with the group that compiled the data, says one of the biggest contributing factors is that low-income workers in these areas have no choice but to go to work.

But he also believes regional travel over the holidays has contributed to rising levels of virus across the province.

"And I mean, I think the timing of the lockdown may have been unfortunate," he said. "They said, 'OK, we're going to go into lockdown, but we're going to be doing it in five days from now.' I think that maybe sent mixed messages to people."

On Thursday, Williams pointed out the hardest-hit areas of the province, Toronto, Peel and York, which previously made up 70 per cent of Ontario's total cases, now make up closer to 50 per cent.

Kwong points out those infected around New Year's may not begin showing symptoms until several days later.

"I'm fearful that next week's numbers are going to be even worse," he said.

Late Thursday, CBC News obtained a memo from the president and CEO of Ontario Health, Matthew Anderson, telling hospitals to prepare for transferring dozens and potentially hundreds of patients across and even out of regions.

Ontario's hospitals are projected to have more than 500 patients with COVID-19 in intensive care units and more than 1,700 COVID-19 in other beds by Jan. 24, according to the memo.

Ford took multiple questions today about the situation in the province's long-term care homes, where deaths continue to mount despite the province's repeated assertions that it has placed an "iron ring" around facilities.

"It's heartbreaking. It's frustrating as well, with the long-term care homes," Ford said.

The premier also talked about vaccines for a considerable portion of the news conference, saying the province vaccinated nearly 15,000 people Thursday. Ford said he spoke with Prime Minister Justin Trudeau last night about the need to increase supply.

"All of Ontario will be out of Pfizer vaccines by the end of next week," Ford said. Provincial officials have told CBC News that they expect another shipment of 80,000 doses next week, alongside 80,000 each of the two following weeks.

"We have a long, long way to go before enough vaccines arrive for everyone," Ford said.

On Thursday, Education Minister Stephen Lecce announced that elementary students in southern Ontario will not be returning to schools for in-class learning until at least Jan. 25 as test positivity rates for COVID-19 rise for adults and children alike.

At the news conference this morning, Lecce said the province will be expanding asymptomatic testing and all schools across Ontario will have access to it. The minister also promised improvements with personal protective equipment and staffing.

With files from MIke Crawley, Lucas Powers and Adam Carter