Ontario reported another 3,128 cases of COVID-19 and 51 more deaths of people with the illness on Tuesday, as the number of active infections and hospitalizations in the province both reached pandemic highs.

The Ontario government has unveiled a plan to vaccinate all long-term care residents, workers and essential caregivers in the hard-hit areas of Toronto, Peel, York and Windsor-Essex by Jan. 21.

The announcement comes amid mounting criticism around the pace of Ontario's rollout of vaccines and on a day when the province saw more than 3,000 new cases of COVID-19 and hospitalizations reached pandemic highs.

Health professionals have called for a "greater sense of urgency" in administering doses and have questioned why the province has only used about a third of its vaccine supply.

"It might take us a week, maybe a couple of weeks to ramp up, but once we get the machine going, we kick butt anywhere in the country," Ford said. 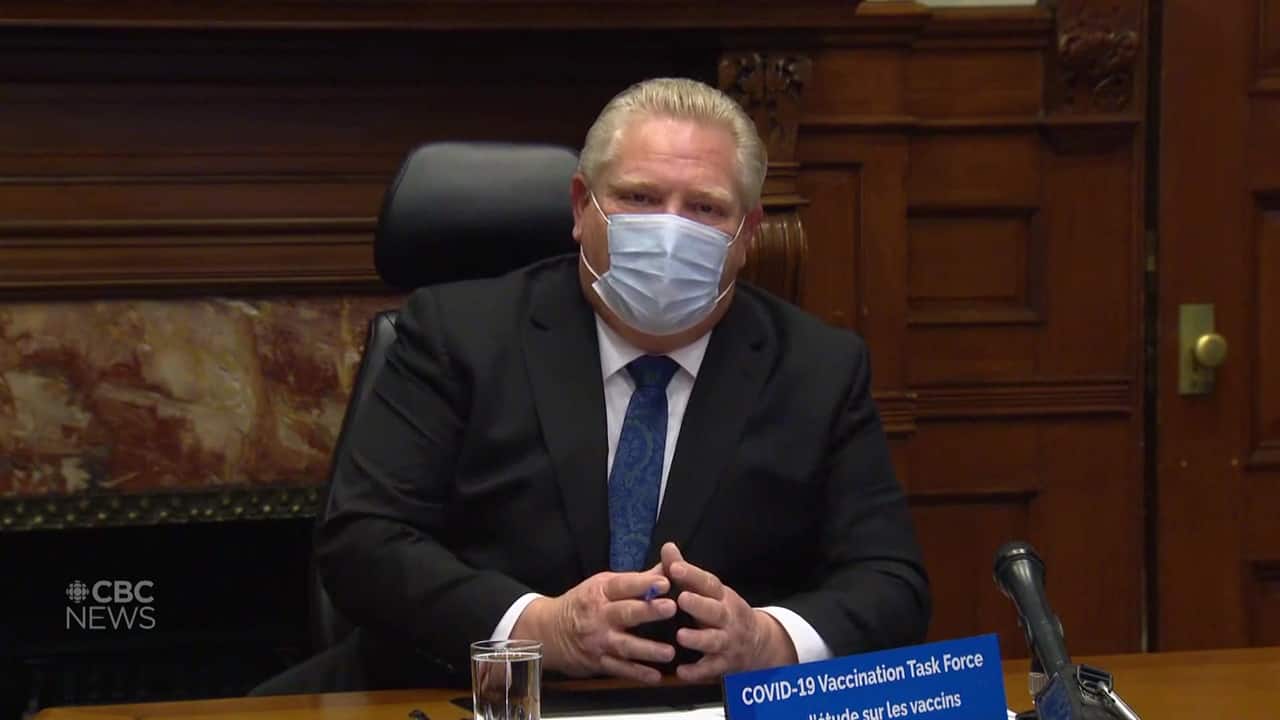 Public health officials said at a morning briefing that, as of 9 a.m. Tuesday, 50,495 people in Ontario had received one dose of the Pfizer-BioNTech vaccine at one of 44 immunization sites.

Some 3,000 doses of the Moderna vaccine have also been administered, officials said, despite Ontario receiving a shipment of 53,000 doses on Dec. 28, 2020. Officials expect another shipment of 56,000 next week.

An additional 4,000 shots of the Moderna vaccine are expected to be given out in 26 long-term care homes in the first half of this week.

In all, Ontario had received 148,350 total doses of the Pfizer and Moderna vaccines as of Monday.

Hillier told reporters that the province is now doing 10,000 vaccinations a day.

He also said the province had been holding back doses of the Pfizer vaccine to ensure there were adequate numbers available for people's second shots, but that Ontario will have used up its initial shipment by this weekend.

A new shipment is arriving in Ontario this week, while a new shipment of Moderna vaccines is set to arrive next week.

The Pfizer-BioNTech shot is largely being given out in hospitals to health-care workers due to its storage requirements, while the Moderna shot is being used in long-term care homes.

The officials said, however, that a pilot project is currently underway in Ottawa to explore how the Pfizer-BioNTech vaccine may be brought into long-term care facilities to accelerate its delivery. Protocols will be developed this week, the officials said.

On Tuesday, Prime Minister Justin Trudeau expressed concern about long-term care outbreaks in Ontario specifically, saying during the same news conference that "now is the time, with the new year upon us, to really accelerate." 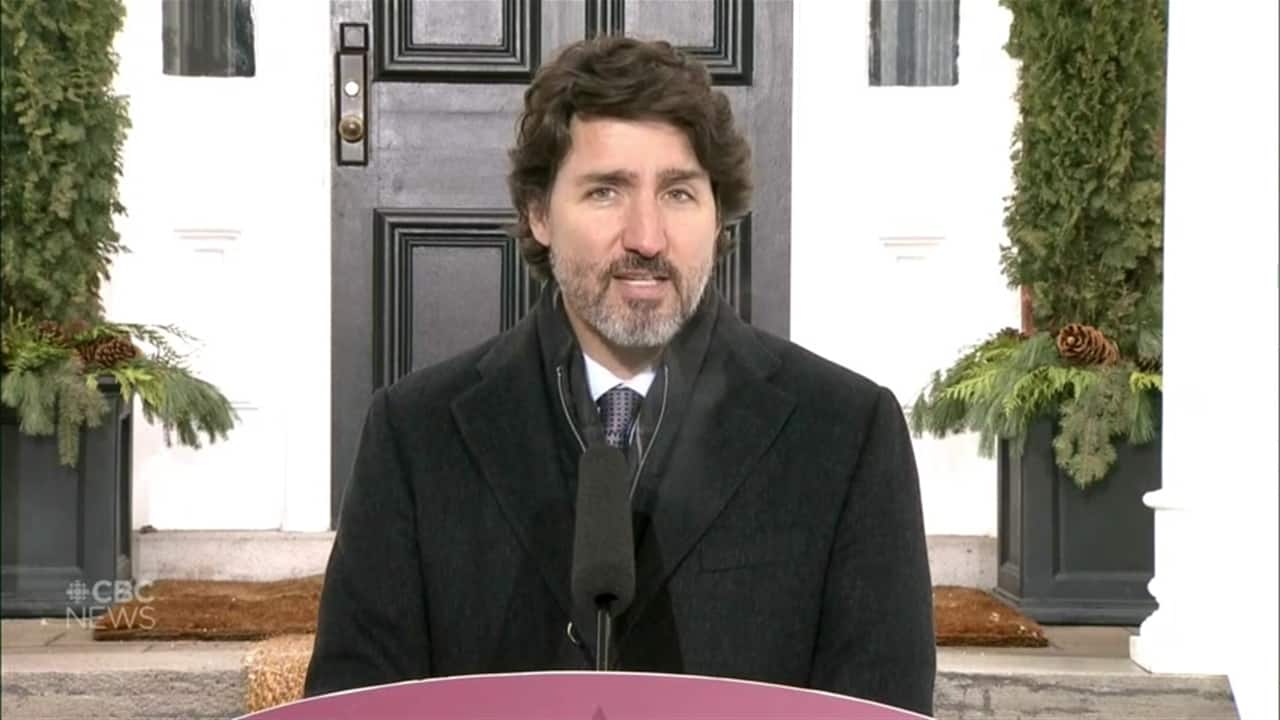 Meanwhile, doses of the Moderna vaccine are expected to begin arriving in some Indigenous communities this week. A collaboration between Ornge, Ontario's air ambulance service, and the Nishnawbe Aski Nation will see doses distributed to 31 mainly remote communities in the coming weeks.

Hillier said vaccines will arrive at smaller long-term care homes along the coast of James Bay in northeastern Ontario on Thursday and Friday, and in the northwestern town of Sioux Lookout, Ont. on Friday.

You can read a summary of the province's updated vaccine rollout plan at the bottom of this story.

Ontario reported another 3,128 cases of COVID-19 and 51 more deaths of people with the illness on Tuesday, as the number of active infections and hospitalizations in the province both reached pandemic highs.

There are now 25,840 confirmed, active cases of the illness throughout Ontario, and the seven-day average of new daily cases surpassed 3,000 for the first time.

Further, there are 1,347 people with COVID-19 in hospitals, 157 more than yesterday, which was the previous record.

Of those, 352 are being treated in intensive care and 245 require the use of a ventilator, both also all-time highs in Ontario.

Public health officials have said that about 350 admissions to Ontario's ICUs is the threshold for when hospitals must begin postponing or even cancelling non-COVID-19 related care and procedures.

Meanwhile, Ontario's network of labs processed just 35,152 test samples for the novel coronavirus — despite capacity for tens of thousands more — and reported a test positivity rate of 9.4 per cent.

The new cases reported today include 778 in Toronto, 614 in Peel Region, 213 in York Region, 172 in Durham Region and 151 each in Middlesex-London and Hamilton.

Other public health units that saw double- or triple-digit increases were:

Though he made remarks on his way into a vaccine task-force meeting on Tuesday, Ford did not hold a news conference. It has been 14 days since Ford last took questions from the media.

During that time in Ontario, there have been more than 37,000 new COVID-19 cases, the number of people hospitalized has increased by 34 per cent and 542 more people have died.

Ford also hasn't answered detailed questions about the actions of his former finance minister, Rod Phillips, who travelled to St. Bart's over the holidays and resigned after returning home to Ontario.

Ontario's first field hospital built during the pandemic is taking patients this week as COVID-19 infections strain the health-care system.

The Burlington facility, built on the grounds of Joseph Brant Hospital, was ready to treat patients as of Monday.

The hospital said it's responding to increased pressure on hospital capacity across the southern Ontario region that includes Hamilton, Niagara, Haldimand County and Burlington.

Rob MacIsaac, CEO of Hamilton Health Sciences, said opening the field hospital is a necessary step as the health-care system is stretched to its limits.

Hospitals in the region are identifying patients whose care has progressed enough to be treated at the field unit, after consulting with their families.

The field hospital was built in April as part of the hospital network's capacity plan.