Non-essential retailers in Ontario will be allowed to reopen at limited capacity when stay-at-home orders are lifted, the provincial government said Monday, as three public health units are set to see COVID-19 restrictions loosened.

Non-essential retailers in Ontario will be allowed to reopen at limited capacity when stay-at-home orders are lifted, the provincial government said Monday, as three public health units are set to see COVID-19 restrictions loosened.

Premier Doug Ford announced the changes this afternoon as part of his government's plan to gradually move all of Ontario's 34 public health units back to a colour-coded reopening framework.

Ontario has been in a provincewide "lockdown" since Dec. 26, and a stay-at-home order was added four weeks ago.

"Today we're seeing some sunlight break through the clouds," Ford said. "My friends, the measures are working. Staying home is saving lives."

The following public health units will move into the green category — the least stringent in terms of COVID-19 restrictions — on Wednesday:

The stay-at-home order will be lifted then in those health units as well.

The order will remain in place in the rest of Ontario until Feb. 16, when it could be lifted in 28 more public health units depending upon COVID-19 trends at the time, the government said.

In Toronto and Peel and York regions, however, the order is set to stay in effect until at least Feb. 22.

In the coming weeks, the province will progressively move more regions back into the colour-coded system, which includes the green, yellow, orange, red and grey "lockdown" stages.

For now, though, all except the three public health units listed above will stay under the stay-at-home order. As part of today's announcement, the province detailed some changes to the set of restrictions that apply to areas in lockdown once stay-at-home orders expire.

Chief among them is that non-essential retailers in the grey zones will be allowed to open their doors with a 25 per cent capacity limit. The province said the move is to "support the province's economic recovery."

The same applies to some other businesses, including discount and big box retailers, liquor stores, hardware stores and garden centres.

Retailers will also need to have a system in place for "patron screening," the province said.

Meanwhile, the 50 per cent capacity limit for in-person shopping at essential retailers, such as supermarkets and other stores that primarily sell groceries, as well as convenience stores and pharmacies, will stay in place.

Personal care services, however, are to remain closed.

Gatherings at residences are still prohibited, but outdoor events and social gatherings of up to 10 people with two metres of distance are allowed, with masks strongly encouraged.

Funerals, weddings and baptisms are also allowed, with 10 people either indoors or outdoors, with two metres of distance between them.

Religious gatherings are similarly capped at 10 people indoors with two metres between them, and masks are mandatory. Virtual and drive-in religious services are also allowed.

Indoor recreational fitness facilities remain closed, but outdoor recreational amenities like rinks and trails are allowed to open with restrictions. Ski hills were initially listed in the province's news release as allowed, but a government spokesperson sent out a statement saying that was a mistake, and they would not be permitted to open.

The province then said later Monday afternoon that the original statement was correct, and ski hills would be allowed to open after all, with certain conditions. 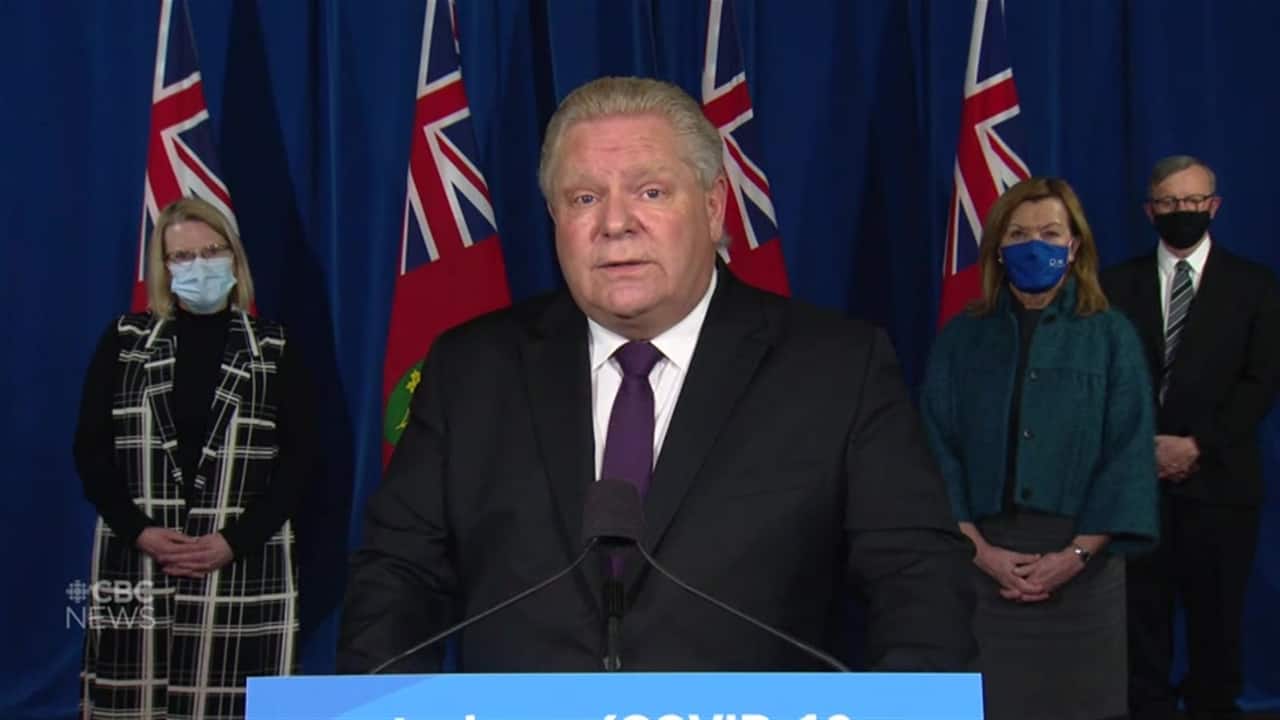 22 days ago
1:43
Ontario Premier Doug Ford says he will allow the provincial state of emergency to expire on Tuesday and begin a staggered reopening as coronavirus cases continue to fall. 1:43

At Monday's press conference, Ford also said that ICUs across the province are still under "immense pressure," and Ontario is seeing "significant delays" with vaccine supply.

"Let me be clear, if we see the numbers spike again, we are prepared to take further action as necessary," he said.

Both Ford and Minister of Health Christine Elliott warned that the spectre of new COVID-19 variants still loom over Ontario as well, with variant cases being found in several areas of the province.

"We must remain vigilant," Elliott said.

"This is not a reopening or a return to normal. It is an acknowledgement that we are making steady progress."

Elliott also noted the province is instituting an "emergency brake" in its plan to quickly move a region into lockdown if it experiences a rapid increase in cases, or if its health-care system becomes overwhelmed.

Meanwhile, Ontario reported another 1,265 cases of COVID-19 this morning.

(Note: All of the figures used in this story are found on the health ministry's COVID-19 dashboard or in its Daily Epidemiologic Summary. The number of cases for any region may differ from what is reported by the local public health unit because local units report figures at different times.)

The cases come as Ontario's labs completed just 28,303 tests for SARS-CoV-2, the virus that causes COVID-19, and logged a test positivity rate of 4.4 per cent.

The seven-day average of new daily cases fell to 1,327, the lowest it has been since Nov. 12, 2020. Further, the number of confirmed, active cases dropped to 14,331. Active cases have been in consistent decline since Jan. 11, when there were more than 30,000 provincewide.

The province said it administered another 6,987 doses of COVID-19 vaccines yesterday. A total of 386,171 shots have been given out so far, and 106,163 people have received both doses and are fully immunized.

More students go back to school

More of Ontario's schools are reopening to in-person learning today.

Students in 13 public health units, including Hamilton and Windsor, will return to physical classrooms.

All students in Ontario began January with online learning as part of a provincial lockdown that went into effect in late December.

The province then took a staggered approach to reopening schools, allowing those in northern Ontario and rural areas to resume in-person learning first.

Education Minister Stephen Lecce said the government is taking a number of steps to enhance safety in schools, such as more stringent screening for high schoolers and asymptomatic testing across the province.

With files from Adam Carter, Lucas Powers and The Canadian Press