The seven-day average of new cases, which helps smooth out noise in the data, is now up to 950.

Ontario says it is introducing a new set of specific criteria for imposing anti-COVID-19 measures in different regions, as the province reported a record-high 1,050 new cases of the illness on Tuesday.

The new colour-coded system is, in part, intended to provide clarity on how decisions about restrictions for different industries and businesses, like restaurants and bars and fitness facilities, are being made at the provincial level.

All three areas were rolled back for a period of 28 days on Oct. 11, meaning the additional measures are set to expire this weekend. York Region is also in a modified Stage 2, but is only in its third week of the 28-day period.

At the province's daily news conference Tuesday, Premier Doug Ford said that as of 12:01 a.m. on Nov. 7, Ottawa, Peel and York Region will move out of the modified Stage 2, which means gyms and indoor dining will once again be permitted, with capacity limits.

The same will happen in Toronto a week later, on Nov. 14.

"Mayor Tory has asked us for a little more time in Toronto," Ford said.

The new system comes as Ford's government has met increasing resistance to harsh COVID-19 restrictions from local politicians and business groups in some parts of the province.

"As a province, and as a country, we're grappling with a new reality. And it's becoming more and more clear COVID-19 will be with us for a while," Ford said.

"We continue to plan for the long game." 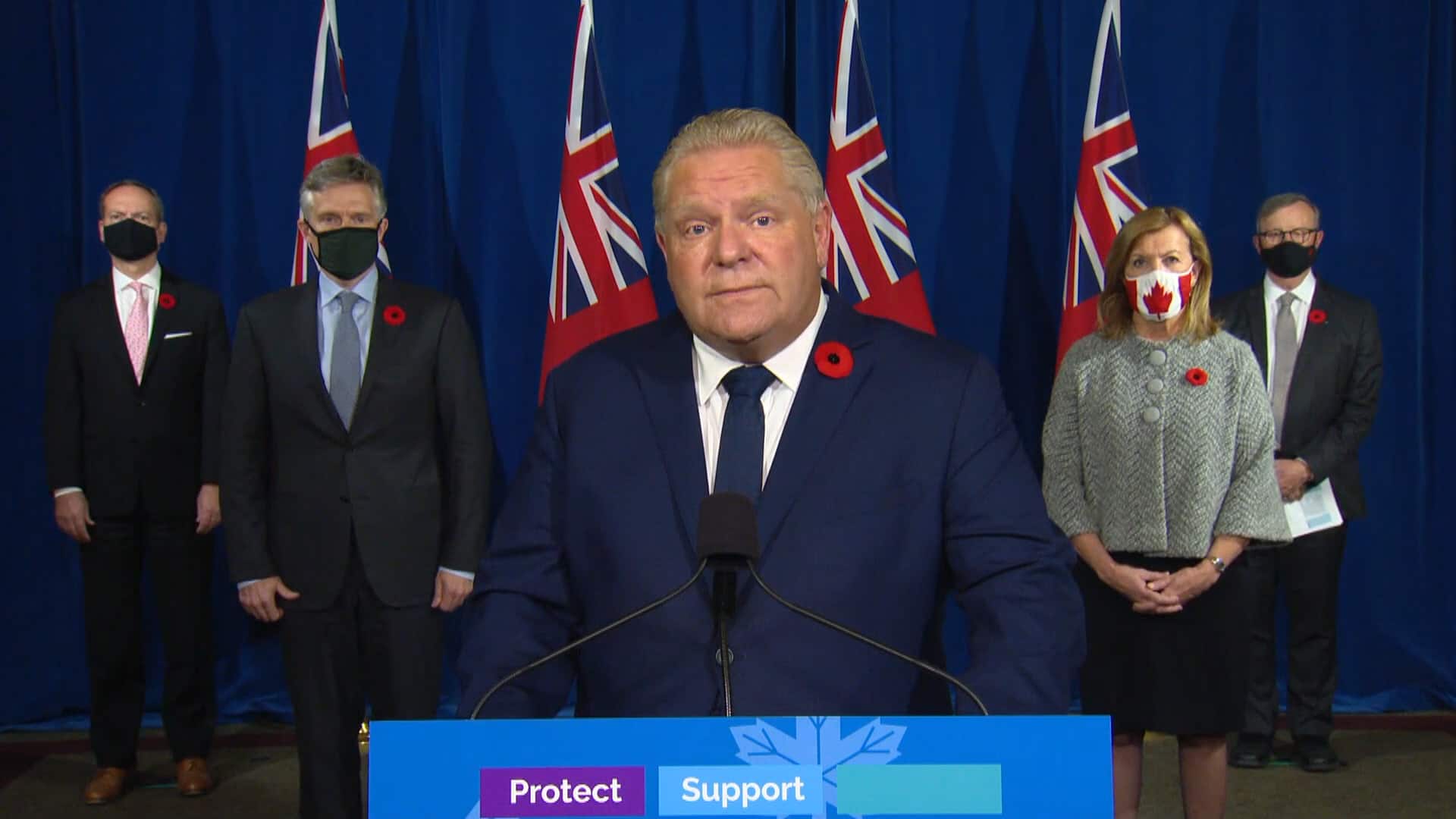 Ottawa, Peel and York Regions to move out of the modified Stage 2 Saturday

3 months agoVideo
0:58
Premier Doug Ford says as of 12:01 a.m. on Nov. 7, Ottawa, Peel and York Region will move out of the modified Stage 2, which means gyms and indoor dining will once again be permitted. The same will happen in Toronto a week later, on Nov. 14. 0:58

The new framework, outlined by public health officials at a morning media briefing, is based on five categories that all correspond to a colour:

Ford said Tuesday that Ottawa, Peel, Eastern Ontario and York Region would all be in the restrict category as of this Saturday, with Toronto following a week later.

Brant, Hamilton, Durham and Halton are being moved into the protect level, Ford said.

According to an analysis by the province based on COVID-19 data reported last week, 25 public health units across Ontario would currently fall into the green.

The criteria for moving a public health unit from one classification to another include measures such as weekly case per 100,000 people; per cent positivity rate of tests; the speed at which the virus is spreading; and the capacity of individual hospital systems.

A full breakdown of the criteria for each category can be found in the slides embedded at the bottom of this story.

Health officials said all of the information and data will be posted online for members of the public to consult at any time. Decisions about specific public health units would be made on a 28-day basis, the officials said this morning.

When asked Tuesday why the province is loosening restrictions when case numbers are still going up, Ford said Ontario is seeing "some positive areas" and "a little bit of flattening," specifically mentioning the situation in Ottawa.

Dr. David Williams, the province's medical officer of health, said the move to a modified Stage 2 for Ontario's hotspots has helped slow the rise of cases in some areas.

"There has been impact," he said.

But the medical officers of health for all four regions agreed, Williams said, that those closures have also had negative impacts on many people that have the regions "concerned about social determinants of health."

Meanwhile, Ontario recorded an additional 1,050 cases of COVID-19 this morning, which marks a new single-day high for the province.

The seven-day average of new cases, which helps smooth out noise in the data, is now up to 950. The province is also reporting 14 more deaths, with its official death toll standing at 3,166. Just under 64 per cent of those deaths were residents of long-term care homes.

Just 25,279 tests were completed yesterday. Public health officials said in September that they hoped to be processing upward of 68,000 tests per day by mid-November, with Monday's testing number far below current daily capacity of about 45,000.

Other regions seeing double digit increases include Ottawa at 34 (a number far lower than daily case count that city was seeing weeks ago), Simcoe Muskoka at 21, Hamilton at 34, Niagara at 31 and Waterloo at 20.

WATCH | Ontario's medical officer of health talks about making decisions during the pandemic: 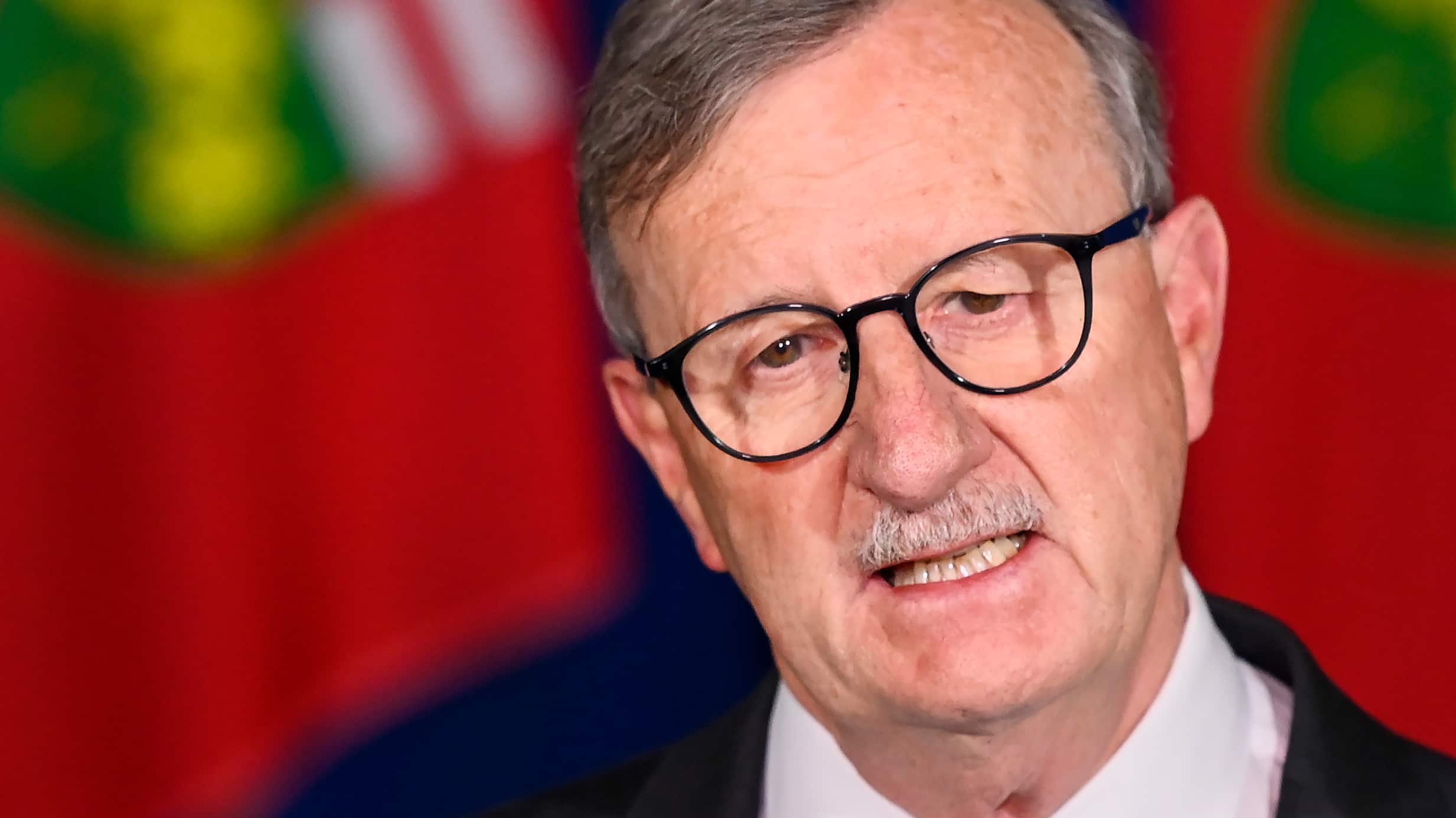 Hospitalizations hit 357, which is the highest they've been since June. There are also 73 patients currently in intensive care and 47 requiring a ventilator.

Currently, there are known outbreaks of COVID-19 in 78 of Ontario's 626 long-term care homes.

The province is also set to launch an enhanced set of graphs Tuesday afternoon, showing more information about infection rates than has been easily accessible until now.

Ford said Tuesday he wants the public to have access to the information he uses when making decisions.

A prototype of the new web page, seen by CBC News, shows new graphs allowing users to compare COVID-19 case numbers between different public health units. Another new chart breaks down how the infections were contracted, whether through an outbreak, close contact with someone positive, or from an unknown source of community spread.

Have more questions about COVID-19 in Ontario? These CBC News stories will help:

What do the latest modelling numbers suggest about the spread of COVID-19 in Ontario?

Experts are forecasting the growth to slow, but to remain in the range of 800-1,200 new cases per day

How are hospitals coping?

Why are fewer people dying during the second wave of COVID-19?

Experts say there are a range of factors, but warn there's still cause for concern