The new cases bring the total number in Ontario since the outbreak began in late January to 8,447.

The province says it is launching an enhanced action plan to contain outbreaks of COVID-19 in long-term care homes, while 494 new cases of the virus in Ontario were announced on Wednesday.

Of those new cases, 221 have been linked to long-term care homes, Dr. David Williams, Ontario's chief medical officer of health, said at a news conference on Wednesday.

Premier Doug Ford said the front lines of the battle against the virus have shifted to long-term care facilities, where 114 outbreaks are now reported across Ontario.

"We owe it to our most vulnerable, we owe it to their families and loved ones, to fight this terrible virus until the end," Ford said at the province's daily COVID-19 briefing on Wednesday.

"Today we're throwing everything we've got to our long-term care homes."

Dr. Merrilee Fullerton, Ontario's minister of long-term care, says the plan will include more testing for residents and staff and increased infection control.

All symptomatic staff and residents will now be screened, as well as any asymptomatic residents or staff who came in contact with someone with COVID-19.

Additionally, the province will provide personal protective equipment to any long-term care homes in need within 24 hours of their request and will work toward "better isolation measures," Fullerton said. 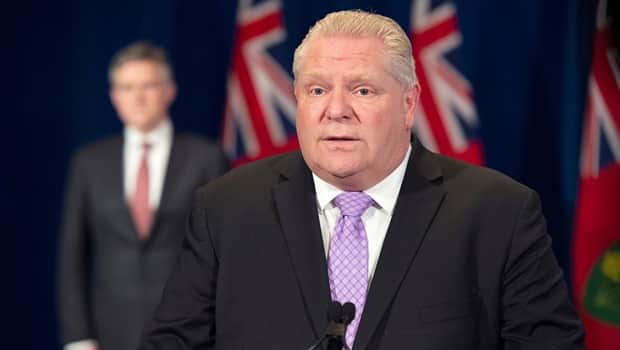 Further, Fullerton said Ontario will also focus on educating on protection and intervention, and will use emergency funding to hire more staff, including "hospital-based swat teams," Fullerton added.

"We will spare no expense to keep our most vulnerable residents safe," she said.

Fullerton said these changes will be rolled out in the next 24 to 48 hours.

According to Williams, there have been 145 deaths in long-term care homes related to COVID-19, and just over 40 per cent of cases are among patients aged 60 and older.

Three homes in Ontario have reported more than 20 deaths each:

Orchard Villa Retirement Residence in Pickering, Ont. confirmed its first deaths related to COVID-19. According to the Durham Region Health Department, four residents have now died of the virus.

Ford says now that more than 140 residents have died in outbreaks in homes, it will be necessary to take a closer look at cracks in the long-term care system. He says this crisis will give the province an opportunity to create higher standards.

He also announced Tuesday that the province will also stop people from working in more than one of the homes at a time to limit the virus's spread.

Unions representing health-care workers have long raised the issue, saying staff often work at multiple facilities because they're unable to get full-time positions.

Long-Term Care Minister Merrillee Fullerton says Ontario will work with the federal government to address wages for those workers while they are prevented from working at more than one home.

Ford expressed frustration last week that Ontario has been testing for COVID-19 well below its capacity of 13,000 a day.

The province fell short of its daily testing target after completing just over 6,000 coronavirus tests since the last update.

"I know they're going to be focusing on the high-priority hotspots," Ford said Wednesday, adding that long-term care homes will now be the main priority.

The latest cases bring the total number in Ontario since the outbreak began in late January to 8,447. The tally includes 3,902 cases that are considered resolved and 896 that are health-care workers.

Some 4,429 people are awaiting test results, more than double from yesterday, which the Ministry of Health attributes to expanded testing criteria increasing the number of tests being submitted.

The province carried out 6,010 tests between Monday and Tuesday afternoon. Public health officials previously set a target of 8,000 tests per day by today, meaning the province is still about 2,000 tests shy of that goal.

There are now 795 people in hospital with COVID-19 in Ontario, 26 more than reported in the last update, but the number of people in intensive care and on ventilators dropped slightly.

Cases per day about half those predicted

Williams said while new cases per day are nearing 500, that's about half what modelling numbers predicted the province would reach daily by mid-April.

He added that there are "positive signs" in terms of number of deaths, hospital admissions, positive cases in the community (when compared to cases in long-term care homes) and patients in intensive care and on ventilators.

The premier and cabinet are now looking at when to start rolling back some of the precautions taken, Williams said.

But he added that the province must ensure it doesn't ease away from preventive measures too quickly, as it's possible a secondary wave of COVID-19 could hit between early and late fall.

"We want to make sure we aren't caught off guard," Williams said. "Some of the things we are doing now we might want to continue doing."

Meanwhile, a facility for adults with developmental and physical disabilities in Markham, Ont. reported its first death on Wednesday.

On Tuesday, the home announced that 37 of 42 residents have tested positive for COVID-19, a jump from 10 cases last week.

Additionally, 12 staff members have also tested positive, up from two.

According to a statement from the family, the victim was a resident named Martin Frogley, who passed away "peacefully listening to the music he loved."

"He was a wonderful son, uncle and the best brother anyone could ever ask for," the statement read.

"Thanks to all staff at the Participation House for their exceptional care and to the staff at Markham Stouffville Hospital for making things comfortable for him on his last days."

Participation House, near Highway 7 and Ninth Line, issued an urgent call for more staff and supplies after employees walked out last week amid the outbreak.

Over the weekend, Markham Stouffville Hospital assembled a rapid-response team to support Participation House, according to a joint statement from the hospital and the home.

Ford said Wednesday that group homes are also one of the province's highest priorities, despite the fact that the government is currently focusing additional resources on long-term care homes.

"My heart breaks for these people," Ford said. "I want to thank them for staying at the post and trying to run the whole home by themselves."

He said it's "extremely important" to roll out an action plan to fight the virus in Participation House and similar facilities, adding that more details will come this week on how to do that.

The Ontario Energy Board (OEB) is delaying setting new electricity prices for the summer months.

The OEB typically adjusts rates for homes and small businesses on May 1, but says it will defer that move this year in light of the COVID-19 pandemic.

It says holding prices at the winter rates set last November will give consumers access to more power at a lower price.

Ford previously passed an order freezing hydro rates at off-peak prices until at least May 7.

Shutdown could be good for wildlife, researchers say

Meanwhile, wildlife experts say the physical distancing measures adopted to curb the spread of COVID-19 could have benefits for Ontario's animal population.

She speculates that improved air quality will likely boost the food chain from plants and insects up to birds and mammals.