Public health officials in Ontario confirmed 85 new cases of COVID-19 in the province on Tuesday, bringing the provincial tally to 588.

Most recent deaths include woman in her 90s in Durham Region, 80-year-old woman in Hamilton

Public health officials in Ontario confirmed 85 new cases of COVID-19 in the province on Tuesday, bringing the provincial tally to 588.

There are now eight deaths linked to the illness, the most recent a woman in her 90s in Durham Region and an 80-year-old woman in Hamilton. Durham Region's health department originally reported the victim was a man.

Another eight cases are considered resolved. It is the biggest single-day increase in new cases in Ontario so far.

There are 10,074 cases under investigation. As of Tuesday at 5:30 p.m., 21,795 people have tested negative for the virus. No new confirmed cases were reported by the ministry Tuesday evening.

She had been in isolation at the hospital since March 16, when she came to St. Joe's for a scheduled treatment. While she was there, she began displaying symptoms of COVID-19. As of Wednesday, Hamilton had 35 confirmed cases of the new coronavirus.

Another 10,074 people are awaiting test results, while 32,547 Ontarians have been approved for testing.

The number of health care workers who have tested positive has increased by five on Tuesday, bringing the total to 31, according to Dr. Barbara Yaffe, Ontario's associate chief medical officer of health.

With more expected to come from abroad, Williams said this would be a "critical week," and urged anyone returning to stay home for 14 days.

On Tuesday evening, the TTC confirmed a subway operator tested positive for the virus. The operator worked part of a shift on Line 1 on Monday, March 16, began to feel unwell, then booked off sick. He has not worked since. He is said to be at home recovering, and doing well.

According to the TTC, the operator had casual contact with a small group of workers and the transit agency has begun to identify them. They will be asked to monitor themselves for symptoms.

There is said to be no increased risk to the public, because operators sit in cabs and are separated from riders. But the TTC is consulting with Toronto Public Health and Amalgamated Transit Union Local 113 to determine next steps.

Earlier Tuesday, the Ontario Provincial Police announced its first uniformed member tested positive for COVID-19. The force said in a statement it learned of the case on March 21.

The OPP said the employee serves the Nipissing West Detachment in northeastern Ontario, which has offices in both North Bay and Warren. The employee is currently at home in self-isolation recovering.

Across the province, OPP say they are taking steps to reduce the risk of spreading COVID-19 by restricting access to police facilities, including detachments.

Hydro rates to be temporarily lowered

Meanwhile, Premier Doug Ford announced Tuesday that hydro rates will be temporarily lowered as many people have been working from home during the COVID-19 pandemic.

All of the current time-of-use pricing will be moved to off-peak rates, Ford said. Depending on billing cycles, some customers could see these changes on their next electricity bill.

"The savings will simply show up on your next bill," he said at a news conference.

The new pricing structure will be in place for 45 days and is expected to cost the government about $162 million.

The closure of all non-essential businesses in Ontario to help curb the spread of COVID-19 will take effect later today.

Ford announced the closures Monday to help curb the spread of COVID-19. The closures start Tuesday at 11:59 p.m. and will last for at least 14 days.

The government says that Ontarians will still have access to grocery stores and pharmacies, and their power and telecommunications will continue to run.

Beer, wine and liquor stores have been given the green light to continue operations, as have gas stations, taxis and vehicle repair businesses. 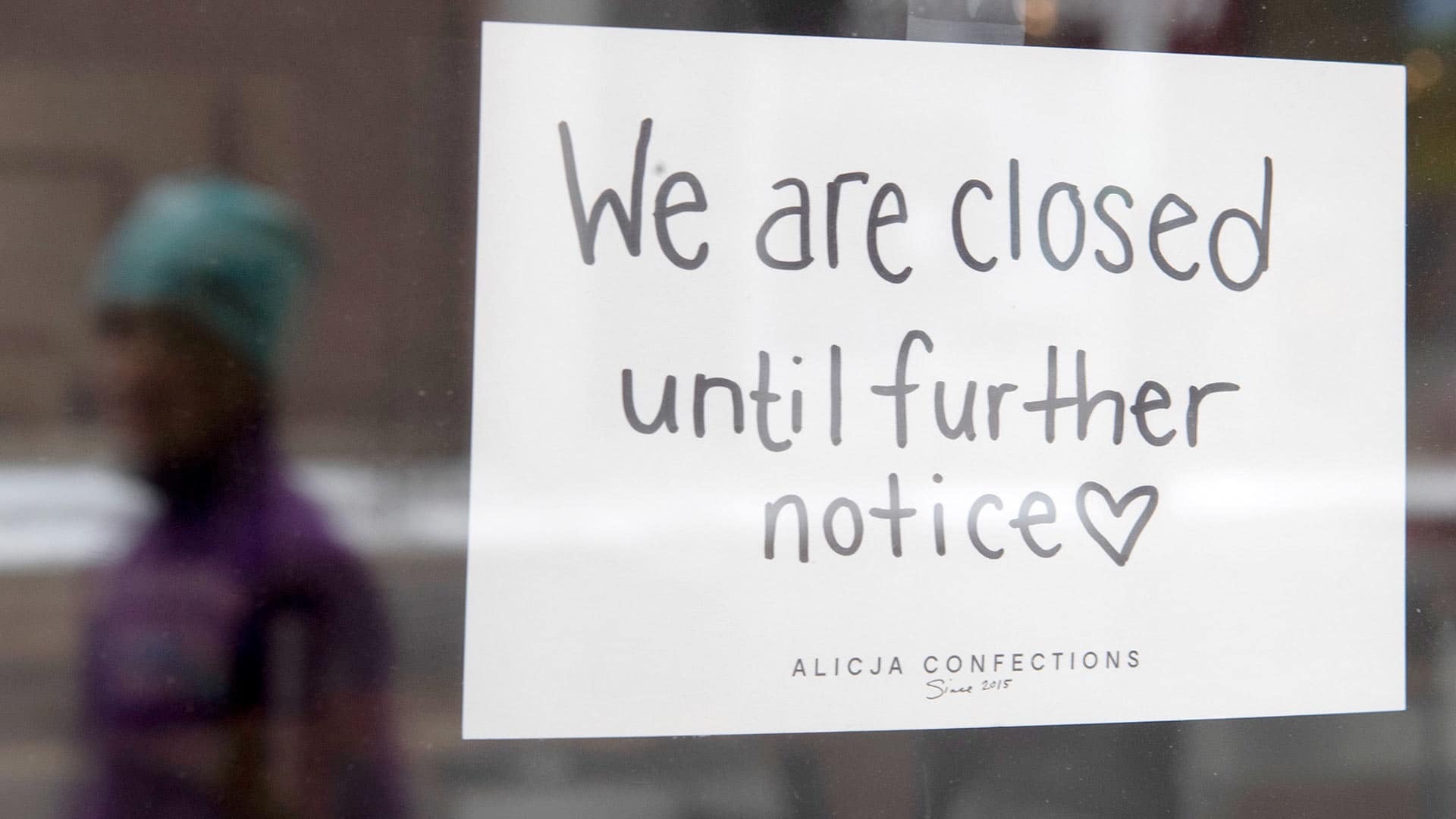 11 months ago
1:51
Ontario Premier Doug Ford ordered all non-essential stores and services to close at the end of Tuesday, to slow the spread of COVID-19. 1:51

Meanwhile, an advocacy group is calling for construction sites to be shut down temporarily for 14 days after it was announced Monday they are part of a list of essential workplaces.

"It makes no sense that you can't have your neighbour over for a cup of coffee yet construction sites are expected to continue operations and they can have hundreds of employees working in close proximity to each other," said The Ontario Construction Consortium's Executive Director Phil Gillies, in release sent out on Tuesday.

The list of construction projects considered essential include those associated with the healthcare sector and provincial infrastructure, and those that support health and safety environmental rehabilitation projects.

On Tuesday, Ford said construction projects are going forward because "thousand of families are waiting to move into new homes."

"When it comes to the necessities of life, shelter is at the top of the list," he said. But he said if any worker doesn't feel safe "you can leave the work site."

The government has deployed labour inspectors to job sites, Ford said, and "will not hesitate to shut sites down."

Also on Tuesday, the City of Toronto confirmed its second positive case of COVID-19 in the shelter system. There is no connection to the first case reported last week, according to a statement released by the city.

"There is no evidence of an outbreak in our shelter system," the statement said, adding that the news of another case is "not unexpected."

"When fully-operational, the facility will have 40 rooms for isolated households waiting for results," the statement continued.

At the news conference on Tuesday, Dr. Yaffe said people living in shelters are part of a group that should get priority for testing.

"It's an ongoing challenge. It's a group that's at high risk for acquiring infection, to look at how you keep them not as crowded with good infection prevention and control," Yaffe said.

Durham region health officials say the woman in her 90s whose COVID-19-death was reported on Tuesday was a resident of Hillsdale Terraces in Oshawa, Ont..

About 15 to 18 additional residents have flu-like symptoms, according to Dr. Robert Kyle, Durham Region's medical officer of health.

Two residents at a long-term care home in Toronto's East York neighbourhood have tested positive for COVID-19, which constitutes an outbreak at that facility.

Toronto Public Health has ordered that residents at the St Clair O'Connor long-term care home shelter in place in their rooms, and staffers have been told to use protective gear, even with residents who are asymptomatic. Residents will also be monitored twice a day for symptoms.

The two residents who tested positive are not severely ill and are not in hospital, according to CEO Mary Hoare.

"All residents in the long-term care home have been placed on home isolation until they declare the outbreak over," Hoare told CBC Toronto.

The province is temporarily changing certain protocols in long-term care homes to ensure that the facilities "will be able to respond to, prevent and alleviate an outbreak of COVID-19."

Under Ontario's emergency declaration, long-term cares will be able to:

Additionally, the province said it will increase the number of long-term care beds available, so that individual facilities can provide isolation rooms for patients if needed.

The parent company of Real Canadian Superstore said late Monday that an employee at its location on Gibb Street in Oshawa location has tested positive for COVID-19.

In an email to PC Optimum members, Loblaw Companies Limited executive chairman Galen Weston said the location will be closed for a "deep-clean" and that the company is in contact with public health officials.

"To keep our stores safe, we will partner with public health to identify and support any colleagues who should self-isolate. They will be instructed to stay home and we will pay them in full," Weston said.