The seven-day average of new daily cases, a measure that helps limit noise in the data to provide a clearer view of longer-term trends, continued its steady upward climb and is now at an all-time high of about 878.

Today's figure comes as the province's labs completed 28,652 tests for the novel coronavirus, while about 32,000 samples were added to the queue to be processed. Ontario currently has capacity for about 45,000 tests to be collected each day. Throughout the pandemic, testing levels have tended to drop off considerably on weekends.

The seven-day average of new daily cases, a measure that helps limit noise in the data to provide a clearer view of longer-term trends, continued its steady upward climb and is now at an all-time high of about 878.

The province broke its record for the most daily COVID-19 cases both days this weekend, recording 978 cases on Saturday and 1,042 on Sunday.

"These high numbers are a message that we're not out of this," provincial Medical Officer of Health Dr. David Williams said Monday.

Other regions that saw double-digit increases include:

Premier Doug Ford's office said this morning that no decision is coming from the Ontario government today on whether Halton and Durham regions will face stricter COVID-19 restrictions.

Ford had suggested on Friday that health officials would look at the caseload in Halton and Durham regions over the weekend to determine whether they need to roll back to a modified Stage 2 of the province's pandemic recovery plan, and that an announcement could come as early as today.

Ottawa, Toronto and Peel and York regions have all seen the restrictions reimposed over the last several weeks as cases of the novel coronavirus soar within their borders.

But politicians in Halton urged the province not to lump them in with neighbouring Peel Region, saying there aren't as many COVID-19 cases in the area as elsewhere in the province.

Ford said Monday that he heard from mayors and officials in the region, and that played a factor in his decision.

The premier has repeatedly said he takes his advice from medical experts when it comes to putting in public health restrictions, but added businesses have a voice as well.

"In saying that, I [also] have to listen to the small business owners," Ford said.

Health Minster Christine Elliott said Monday that the province is still considering measures for Halton, and any other place region officials are concerned about right now.

Elliott said case numbers in some regions are "starting to come down," but also said much of that has been offset by cases linked to Thanksgiving gatherings.

York Region identified one such region in a media release Sunday, which described 16 confirmed and probable cases linked to a Thanksgiving gathering in Vaughan. That cluster also led to infections at a workplace, public health officials say.

Meanwhile, the number of people in Ontario hospitals with confirmed cases of COVID-19 has reached at least 295, the most so far during the resurgence of the illness that began in early August. At the height of the first wave in the spring, more than 1,000 people were hospitalized.

Further, there are currently 78 people being treated in intensive care units and 51 on ventilators, both down slightly from the weekend.

The province also reported another six deaths of people with COVID-19, bringing the total toll to 3,099.

Ontario has now had 71,224 confirmed cases of the novel coronavirus since the first was reported in late January. Of those, about 85 per cent are considered resolved.

There are currently 7,296 confirmed, active cases of COVID-19 provincewide, a new high by a considerable margin.

At the province's daily news conference Monday, Finance Minister Rod Phillips announced that he will release a three-year budget on Nov. 5 that will include "three plausible economic scenarios."

Another budget update is expected by the end of March 2021, Phillips said.

"A great deal of uncertainty remains today," he said.

The budget was initially supposed to be rolled out in late March, but was postponed as the province shifted its attention to curbing the spread of COVID-19.

Phillips said in August that the government expected a budget deficit of at least $38.5-billion for the 2020-2021 fiscal year.

A Progressive Conservative legislator is apologizing for not wearing a mask while posing for a group photo over the weekend.

Sam Oosterhoff, who is also the parliamentary assistant to the education minister, posted the picture on social media over the weekend but later deleted it. 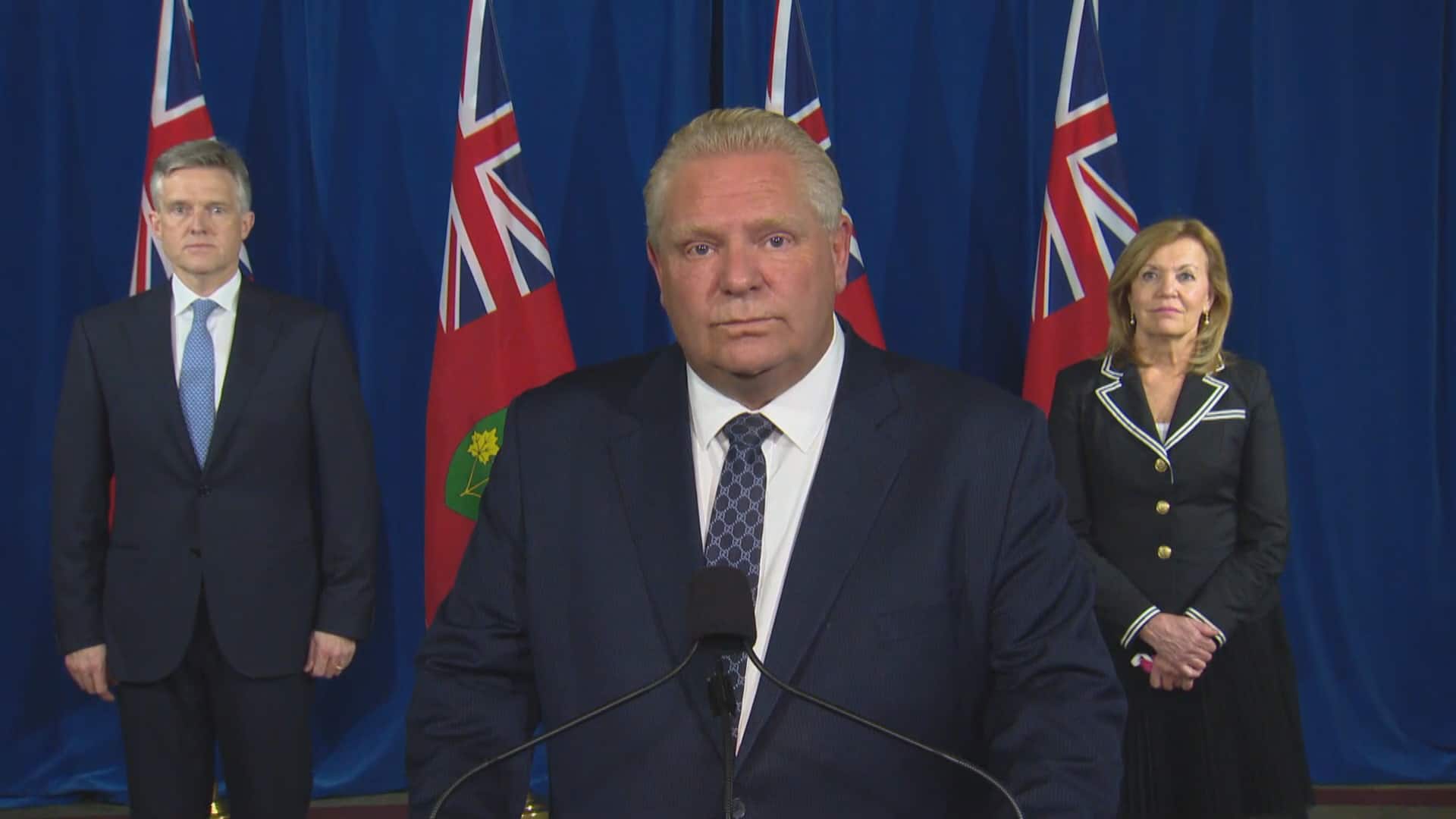 Premier defends MPP who posed without a mask in group photos

1 month agoVideo
0:34
Sam Oosterhoof posted photos of him not wearing a mask on social media which triggered backlash and calls for his resignation. Premier Doug Ford said Monday that he made a mistake, but will keep his job. 0:34

Critics — including the NDP and the head of the Ontario Hospital Association — have called for Oosterhoff's resignation as parliamentary assistant, saying he was not following his government's pandemic guidance.

Oosterhoff said the event took place at a banquet hall where the province's rules permit less than 50 people to attend.

He said the event included five tables that were distanced and limited to less than 10 people at each.

But Oosterhoff said he should have worn a mask when taking the picture given the proximity of the people around him.

Ford defended Oosterhoff Monday, and said he would stay on as a parliamentary assistant.

"I have 100 per cent confidence in Sam. He does a great job in representing his area," Ford said.

With files from Lucas Powers, Adam Carter and The Canadian Press