Ontario reported 721 new COVID-19 cases on Wednesday, despite a drop in the number of tests being processed daily across the province.

Ontario's network of community, commercial and hospital labs processed just 32,200 tests on Tuesday, notably fewer than the number of tests completed daily as the province worked to clear a backlog that peaked at around 92,000. The testing backlog currently sits at 26,558.

The number of daily tests completed also falls far short of the province's goal of processing 50,000 tests per day by mid-October.

According to a news release issued on Oct. 2, Ontario said it was taking "longer-term actions" to increase the province's testing capacity so people could get their results faster.

The province also set a goal of processing 68,000 tests by mid-November.

"We had a backlog, we were able to get through that hump."

Associate Chief Medical Officer of Health Barbara Yaffe said the province's seven-day positivity rate average sits at 2.2 per cent, a figure she calls "worrisome" and likely the result of fewer tests being completed.

On Wednesday, the positivity rate increased by 0.4 percent and now sits at three per cent.

"It also indicates that we see transmission in the community," Yaffe said at a press conference Wednesday.

Tighter restrictions were imposed on Toronto and Peel Region as well as Ottawa on Friday in a bid to slow the spread of the novel coronavirus.

Wednesday's new cases bring Ontario's provincial total to 61,413. Of those, 783 were marked resolved in today's update. On Tuesday, Ontario's Chief Medical Officer of Health, Dr. David Williams, suggested the province's COVID-19 cases may be "plateauing," even with the seven-day average showing a steady increase. You can see those comments in the video below: 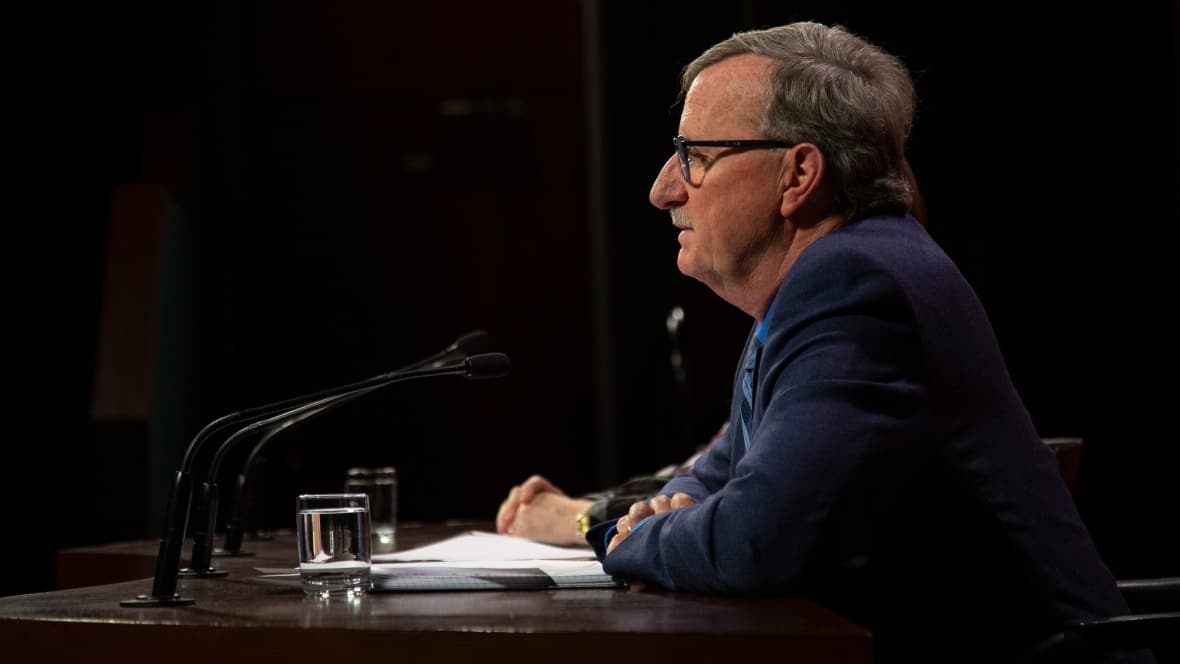 3 months agoVideo
0:51
Dr. David Williams made the comments on Oct. 14, despite the 7-day average in new daily cases showing a steady increase. 0:51

The number of patients in Ontario hospitals with confirmed cases continues to rise and currently sits at 231.

Those requiring intensive care also increased, from 60 on Tuesday to 64 today, and the number on ventilators increased by one to 35.

The average daily number of new cases of the illness continued its steep climb and is now at 781.1.

Meanwhile, other Ontario public health units with double-digit increases include:

Asked Wednesday if Ontario will consider imposing stricter measures in regions with increasing COVID-19 cases — notably Hamilton and York regions — Yaffe said that is something health officials will consider this week.

"The public health measures team is meeting again later this week and they will be considering the data for all of the health units in Ontario and whether any changes need to be made for any of them," she said.

The bulk of the new cases reported Wednesday are among those under the age of 60. 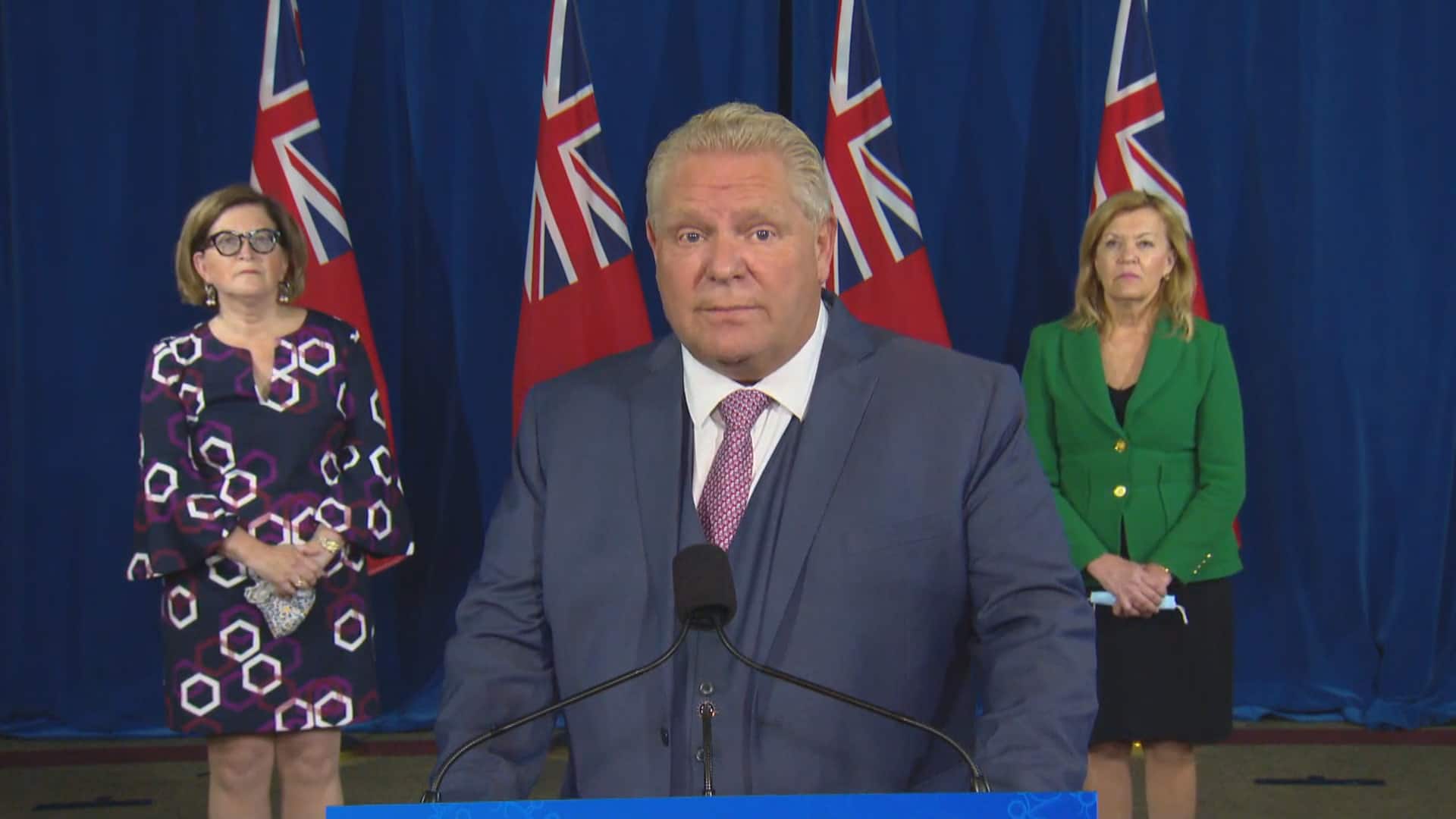 3 months agoVideo
0:44
When asked Wednesday why certain businesses in hot spots have been forced to close, including gyms, Ford said COVID-19 has created a 'lousy, lousy situation.' 0:44

Outings on hold at long-term care homes in hot spots

As of Oct. 16, short-term and temporary absences for social or personal reasons will not be allowed at long-term care homes in Toronto, Ottawa and Peel Region.

This comes after new restrictions took effect on Oct. 5, limiting visitors at long-term care homes in these areas staff, essential visitors and essential caregivers only.

"We recognize these changes may be difficult for the residents and families affected," Dr. Merrilee Fullerton, minister of long-term care, said in a statement Wednesday.

"But our priority has to be the safety and well-being of the residents and staff in Ontario's long-term care homes."

A full list of impacted long-term care homes can be found here.

Ontario to decide which long-term care homes will receive assistance

The province is also in the works to decide which of Ontario's long-term care homes will receive assistance from the Canadian Red Cross amid the second wave of the pandemic.

A spokesman for the Ministry of Long-Term Care said Tuesday the province will be finalizing details of the deployment over the coming days.

On Sunday, the federal government announced it had approved a request from Ontario to send the Red Cross to seven long-term care facilities in Ottawa.

As of Tuesday evening, CBC News estimates that there were active COVID-19 outbreaks in more than 120 long-term care homes in Canada's hardest-hit provinces alone: Ontario, Quebec, Alberta and British Columbia.

That upward trend is cause for rising concern among long-term care residents and families and health experts, who are hoping to avoid the same lockdowns implemented in the spring.

At Wednesday's press conference, Elliott said the province continues to remain "vigilant" in testing at long-term case homes across the province.

Meanwhile, health officials say they are continuing to recruit new contact tracers and case managers to track the spread of COVID-19.

The province has hired 100 new contact tracers, with 500 additional recruits expected to be hired by mid-November. Those new hires should bring Ontario's total to just under 4,000.

"With these additional hires, we will have hundreds more boots on the ground to support contact tracing throughout the province, which is an essential weapon in our fight against COVID-19," Ford said in a statement Wednesday.

Health officials also continue to urge residents of Ontario to download the COVID Alert contact notification that can tell them whether they have been near someone who has tested positive for COVID-19 over the previous two weeks.

Nearly 1,000 Ontarians with confirmed COVID-19 cases have used the app to send anonymous alerts to their close contacts, Elliott added.