Ontario Premier Doug Ford is ordering all non-essential stores and services to close starting Tuesday at 11:59 p.m. in an attempt to slow the spread of COVID-19.

Change in effect at 11:59 p.m. Tuesday, but LCBO and the Beer Store to stay open, source says

Ontario Premier Doug Ford is ordering all non-essential stores and services to close starting Tuesday at 11:59 p.m. in an attempt to slow the spread of COVID-19.

There are no plans to close the LCBO and the Beer Store, according to a senior government source,

This comes as the province confirmed 78 new cases of COVID-19 on Monday, raising the province's total to 503. No new numbers were announced at 5:30 p.m.

"This decision was not made lightly, and the gravity of this order does not escape me," said Ford at a news conference on Monday afternoon, adding the order will be in place for at least 14 days.

The list of what constitutes essential and non-essential services and stores will be released Tuesday, but Ford insisted residents will be able to buy food and medicine and other essential products, and that "the power will stay on" and telecommunications tools will continue to run.

"Every Ontarian must do their part. If you can, please stay home, only leave if necessary," Ford said. 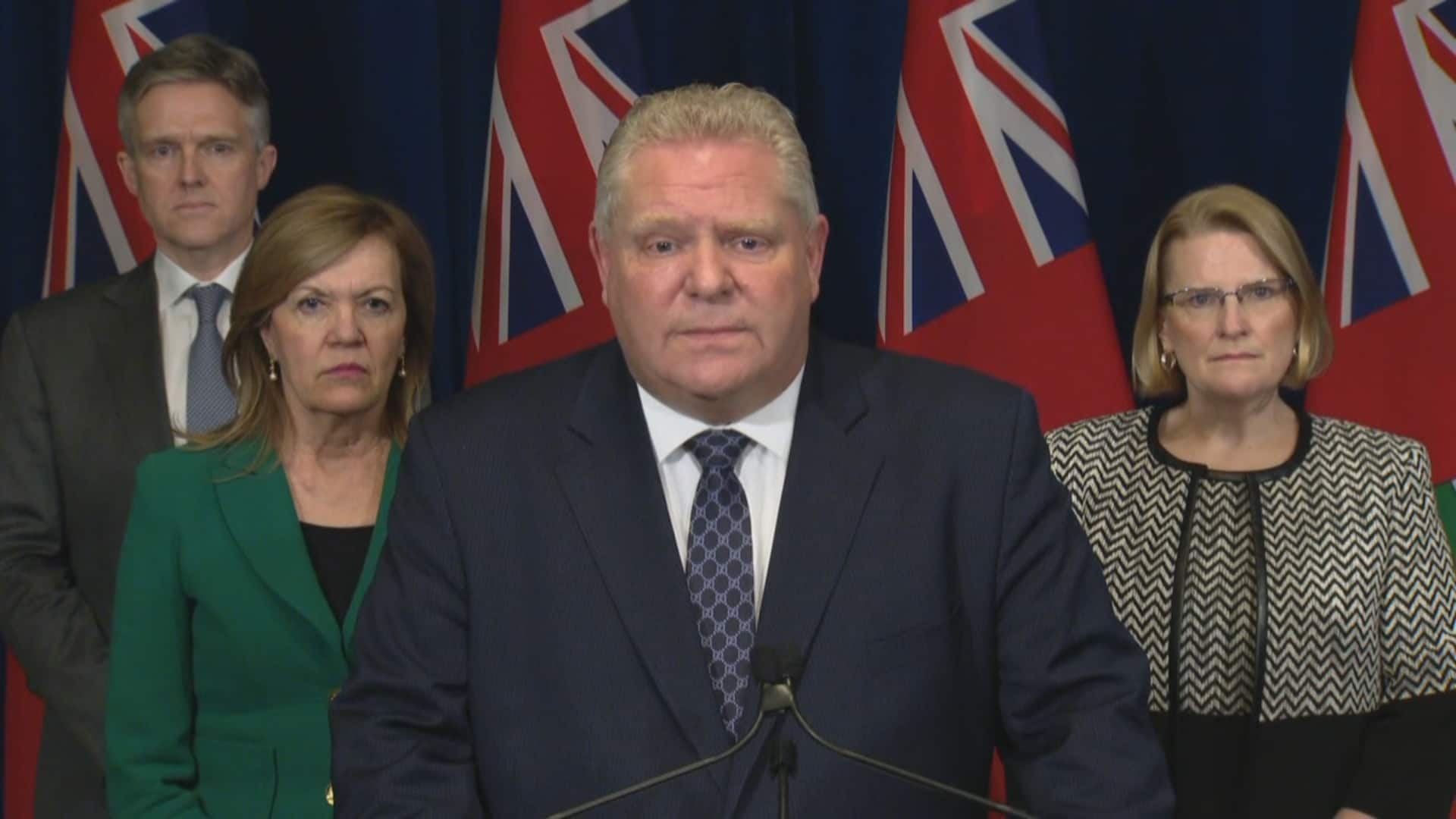 11 months ago
0:41
Premier Doug Ford said the new measures will take effect at 11:59 p.m. on Tuesday, March 24 and will force the closure of all businesses deemed "non-essential." 0:41

The tally also includes the death of a man in his 80s in the City of Kawartha Lakes — marking Ontario's sixth COVID-19-related death — and eight cases that are considered resolved.

On Monday, Barbara Yaffe, the province's associate chief medical officer, said a total of 39 people have been hospitalized for COVID-19, including those who are no longer in hospital. A total of 12 patients have been or still are in the intensive care unit, she said.

In total, 26 of the confirmed cases were health-care workers, Yaffe said, adding they are a "priority group for testing" and will often jump the line.

The number of people getting tested continues to climb every day. Yaffe said yesterday 3,100 people were tested, up from about 2,000 last week. Yaffe said they hope to be up to 5,000 by the end of the week.

Some 8,417 people are still awaiting test results, while more than 28,500 tests have been completed. The government says Ontario has 58 dedicated COVID-19 assessment centres running, well up from the 38 Premier Doug Ford said were open just a few days ago.

Two new deaths in the GTA were announced yesterday — a Toronto man in his 70s and a woman from York region who was also in her 70s. Sources told CBC Toronto today that Mayor John Tory is going to declare a local state of emergency this afternoon.

Small percentage of cases may be local transmission

The vast majority of Ontario's positive cases are in people who have travelled, but about 17 per cent have no history of travel or being in close contact with another confirmed case, said Yaffe.

"I think it's fair to say that yes in some small percentage of cases...there may be some local transmission of COVID-19," she said.

The update comes as the province announced it would commit $200 million in relief funding directly to municipalities that administer key social services.

The government said the money will go toward:

The funding will also go to people and families who are struggling financially but are unable to access federal support programs, said Ontario Social Services Minister Todd Smith on Monday at Queen's Park. Anyone can apply through the province's website: ontario.ca/community.

The money is meant for food, groceries, rent and medicine and "other daily concerns that they might have," Smith explained.

"The funding is up and running immediately," he said.

The vast majority of the funding — $148 million — will be given directly to municipal staff who deal with shelters and who are "on the ground and know the needs of their community best," said Steve Clark, the minister of Municipal Affairs and Housing.

"These are extremely flexible funds," he explained, adding the money can be used to pay for rooms in hotels and motels, or to team up with local charities to help the homeless or those at risk of being homeless.

When asked if kids will be returning to school on April 6, after what will be a three-week, extended March break, Ford said "is not realistic."

"The kids won't be going back to school on April the 6. We will be making sure that we give a proper time frame," he said

Education Minister Stephen Lecce is expected to give an update on schools in the next day or so, but he is bracing parents for the new normal on what would have been the first day back to class after March break.

Lecce issued an open letter last night saying the government is looking at ways to keep coursework going. Now he says it's possible students will have to continue their classes online during the global outbreak.

Ford wouldn't say whether or not he would shut down construction sites, but did express dismay over some pictures he's seen of "outhouses overflowing" and workers "not having proper sanitary items."

Ford also said construction projects like a new hospital being built in Vaughan are "critical" and must be "up and going as soon as possible."

Dr. Eileen de Villa, Toronto's medical officer of health, told a news conference later on Monday that she strongly supports the provincial move to shut down all non-essential businesses as of 11:59 p.m. on Tuesday. She said the sooner they are closed, the greater the impact the closure will have on reducing spread of the virus.

Asked whether she thinks the LCBO should remain open, she said: "Whether we care to admit it or not, there are many people in our community who have significant dependence issues with respect to alcohol. I think we have to be very conscious of that fact and be aware that if that substance, that provision, is no longer available, that that would lead to pretty significant health consequences."

Over the weekend, the province announced it was issuing a new order under its emergency declaration giving hospitals the ability to cancel and postpone services to redeploy resources and staff quickly.

Meanwhile, Ontario's Ministry of Health has revamped its online COVID-19 self-assessment test. Questions are now more interactive and offer more specific advice based on what kind of symptoms a user is experiencing.

Health Minister Christine Elliott said in a statement that the tool will give the province real-time data on the number of people who are told to seek care, self-isolate or monitor for symptoms, as well as where in the province they live.

The new assessment tool was adapted from the one already in use in Alberta.

Two of the province's medical associations are calling on health staff to start using a provincial supply of expired masks due to fears of a shortage.

The Ontario Medical Association and the Registered Nurses' Association of Ontario say there's a large stockpile of the masks which have expired but should still be used in lower-risk areas.

The associations are also calling on anyone with masks not currently being used to hand them over so they can be used by health workers.

Similarly, a Toronto hospital is now accepting donations of face masks and other protective gear from members of the public.

The east Toronto hospital is home to a dedicated COVID-19 assessment centre.

On Monday, Health Minister Christine Elliott said "we have an adequate supply of personal protective equipment."

The province is working with the federal government to get more, she said, as well as with other organizations, such as dentists and cosmetic surgeons.

"We are getting the supplies in," she said. "We have adequate supplies for all of our frontline professionals."

The federal government has said it has secured millions more masks, which should be arriving shortly, but there's still concern it won't be enough.

They specifically called on education institutions and dental workers to re-purpose their supplies.

Ontario NDP calls for $2K to families in need

Ontario NDP Leader Andrea Horwath has called for Wednesday's fiscal outlook from the Ford government to include a plan for $2,000 "emergency income" cheques to "households experiencing unemployment or lost income during the COVID-19 crisis."

Horwath said the payments would help families waiting for financial support from the federal government. The NDP is asking that the funds be sent out to "everyone who needs them" by April 1.

"We need to help people before rent is due, before the cupboards are empty," Horwath said in a statement issued Monday.

The upcoming fiscal update will be a placeholder for the full provincial budget, which was initially supposed to be released this week.

Finance Minister Rod Phillips said last week that it will be a "realistic, one-year outlook" that's based on current economic conditions.

TTC no longer accepting cash on its buses

The TTC says the deadline for riders to cancel their April monthly passes as part of their "12 Month Plan" has been extended until Friday, March 27 at 11:59 p.m. Cancellation fees have been waived.

In a tweet, the transit agency said it understands that the needs of riders may have changed. Riders simply need to go online and log into their My Presto accounts.

The TTC is also asking bus customers to board and exit from rear doors, except when they require the kneeling ramp.

Payment is now only by Presto fare card or Presto tickets, which are purchased at machines inside subway stations.

The TTC says it is no longer accepting cash, youth and senior TTC tickets, or tokens on buses at this time.

Some practical advice from a nurse

"I have been noticing on my walks that many people are out and about getting fresh air, which is great! However many, many people are drinking out of takeout coffee cups — everything is takeout now. Some people don't realize it takes a whole palm of a hand to put on a takeout lid if done correctly," she wrote.

"I hope and advise people to ask for no lid. There may be some spillage, but it's worth it. I'm no germaphobe, but I do believe in infection control."