Ontario to reopen some retail stores within days, moving with 'cautious optimism' amid COVID-19

Ontario will relax some of its coronavirus restrictions in the days ahead, moving with "cautious optimism" to allow garden centres, nurseries, hardware stores and safety supply stores to reopen so long as they adhere to the same public health measures currently in place at grocery stores.

Ontario will relax some of its coronavirus restrictions in the days ahead, moving with "cautious optimism" to allow garden centres, nurseries, hardware stores and safety supply stores to reopen so long as they adhere to the same public health measures currently in place at grocery stores, Premier Doug Ford says.

The public will be allowed to shop in these stores as long as physical distancing, contact-less payment and sanitization measures are in place, Ford said at his daily briefing Wednesday.

Select retailers can reopen according to this schedule:

The province will also expand what counts as essential construction with work allowed on condominiums and apartments, Ford said.

"We have seen in other jurisdictions that moving too fast, ignoring the advice given on this virus and even giving it an inch can set us back," Ford said. "So we will move cautiously."

Asked about when restaurants might reopen, Ford said his hope is that they can do so "sooner than later," but provided no benchmark on how low Ontario's daily new case count would have to go before that happens.

WATCH | Ford on what retailers are being allowed to open amid COVID-19: 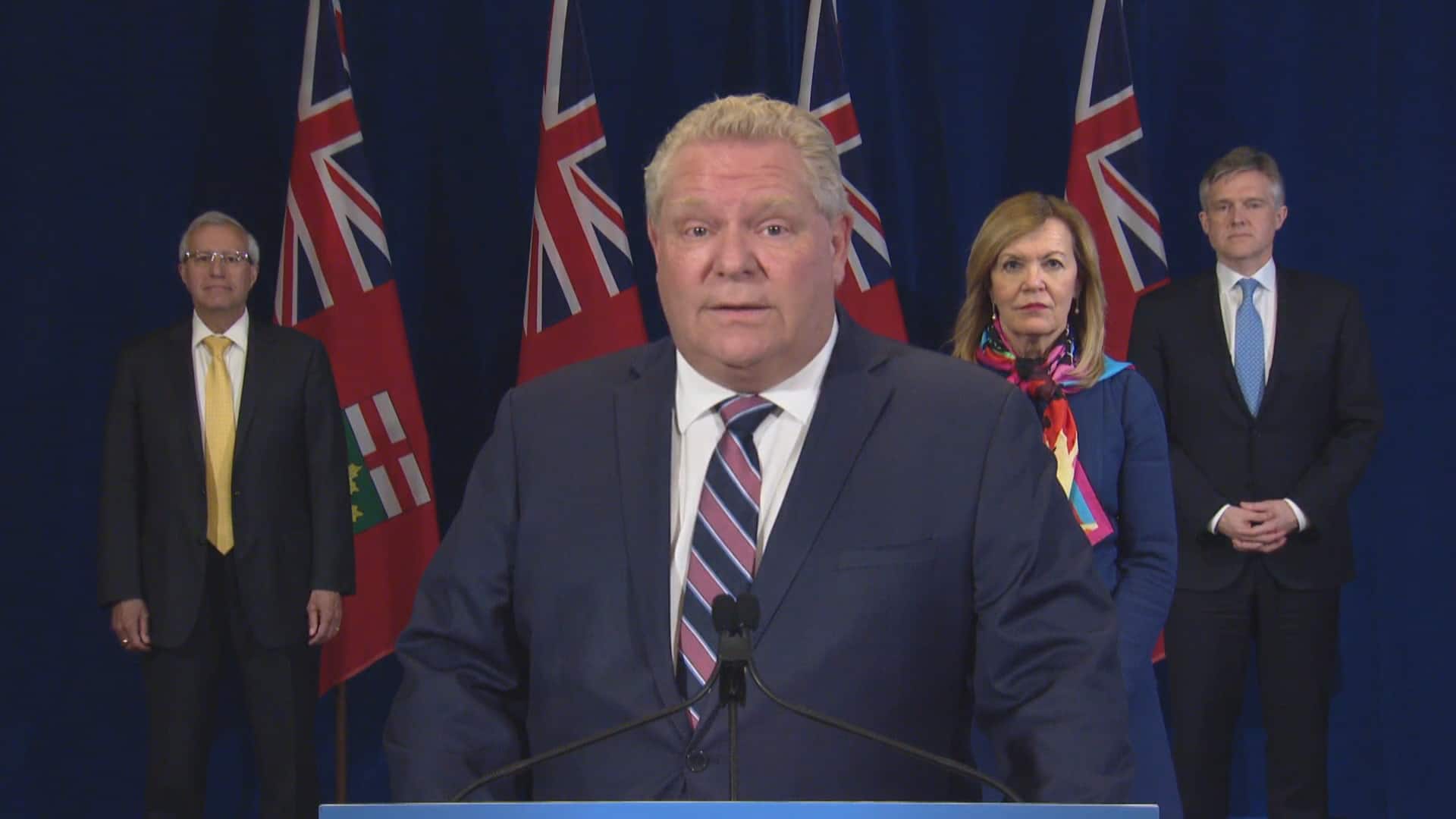 10 months ago
2:39
Select retailers, including nurseries, garden centres and hardware stores, can reopen by the end of the week, Ontario's premier says. 2:39

"There's a tale of two cities in Toronto," he said, saying downtown areas like Queen Street or Dundas Square look very different than more suburban Scarborough, Etobicoke or North York. Ford said he is confident Mayor John Tory will put in the "proper protocols" to avoid the sort of crowding seen outside a Toronto video game store in the early stages of the pandemic.

Not technically at 1st stage of reopening

Although the government is allowing some businesses to reopen, the province is not yet technically in the first stage of its reopening framework, and on Wednesday extended its emergency orders until May 19.

Stage one of the reopening framework would allow workplaces that can modify operations to open their doors, the opening of parks, allowing for more people at certain events such as funerals, and having hospitals resume some non-urgent surgeries.

But before all that can happen, the chief medical officer of health is looking for a consistent, two-to-four week decrease in the number of new cases. So far, the province is in day four of a downward slope.

Ontario reported 412 additional cases of COVID-19 on Wednesday, a 2.3 per cent increase in total cases that is on par with daily growth rates seen over the last week.

The new cases bring the cumulative total in the province since the outbreak began in late January to 18,722. For the first time, the number of cases considered resolved pushed past 70 per cent.

Slightly more than 57 per cent of all cases have been recorded in women, while men make up just below 42 per cent of cases, according to the Ministry of Health.

For the third straight day, the number of COVID-19 tests processed was below the province's target of 16,000 per day by today. Ontario's network of public, community and hospital labs processed 12,961 tests in the last 24 hours, after just 10, 654 the day before and 14,655 the day before that.

Dr. David Williams, Ontario's chief medical officer, has previously said that there is capacity in the province to process more than 19,500 tests each day. At his daily briefing yesterday, Ford criticized some public health units for not doing enough testing in long-term care homes.

Residents of long-term care homes continue to be hardest hit by the disease, accounting for nearly three quarters of Ontario's COVID-19-linked deaths. Outbreaks have been reported in 223 of the province's 630 long-term care facilities.

The official death toll rose to 1,429, an increase of 68. However data compiled from regional public health units — a more current snapshot of deaths in the province — puts the actual toll at at least 1,545.

Both hospitalizations and the number of patients being treated in intensive care units dropped slightly since the last update. But those on ventilators jump to 174, up from 166.

Meanwhile, the Ontario government is extending all-day, off-peak electricity rates until the end of May as many people continue to stay home due to the COVID-19 pandemic.

Those who pay time-of-use rates will be billed at the overnight and weekend price for electricity.

"During this extraordinary period, many people are struggling to pay the bills as they do the right thing by staying at home, as well as our farmers and those whose businesses have closed or suffered reduced customer traffic," Ford said in a news release.

The rate relief was introduced for an initial 45-day period on March 24 as the province expanded emergency measures put in place to curb the spread of the novel coronavirus.

The government has also extended its other emergency orders, including the closure of non-essential businesses, the prohibition of public gatherings of more than five people, and the closure of outdoor amenities such as playgrounds, for an additional two weeks.

They were supposed to expire today, but they will now remain in place until at least May 19.

The province's associate medical officer of health said Wednesday that Ontario will soon begin collecting race-based and socio-economic data on a voluntary basis during COVID-19 testing. Exactly what that will look like isn't yet clear, but Dr. Barbara Yaffe said the province is in the process of having the relevant queries added to the list of questions asked by public health units.

The collection will be voluntary because Ontario's Anti-Racism Act does not authorize health-care providers to collect such data due to privacy considerations, Yaffe added.

Toronto, Mississauga, Brampton, York and Caledon have already agreed to collect race-based data at the municipal level, but so far, Ontario has not opted to do so at the provincial level. The federal government also doesn't track race as part of its COVID-19 data.

Liberal MPP Michael Couteau welcomed the province's move, urging public health officials to "expedite this process and ensure all patients are given the option to provide their demographic information, so we can do what the experts tell us need to be done..."

Meanwhile, the Alcohol and Gaming Commission of Ontario is allowing licensed restaurants and bars to sell some spirits at a lower price to customers who order take out and delivery food.

The minimum sale price for whiskey, gin, rum and some other select liquors has been lowered to $1.34 per 29 mL, down from the previous price of $2.00 for the same volume, the AGCO said.

The measure is set to be revoked on Jan. 1, 2021, which is also when licensed restaurants and bars will no longer be allowed to sell alcohol with takeout and delivery food.

Further, the AGCO said that cideries in the province will be allowed to have stores on their properties to sell their products directly to customer. Previously, an operation had to have at least five acres of planted fruit to qualify for a storefront at the same location.

"This change will allow all licensed manufacturers of cider to sell their products on-site or deliver directly to consumers across Ontario," the AGCO said.

New figures reported by Telehealth Ontario suggest residents looking for medical advice on the phone should still expect a long wait before having their questions answered.

During the past week, the province says the average time before a caller connects with a Telehealth representative is two minutes, however those looking to speak to a nurse have had to wait approximately nine hours for a call back.

The growing wait times come after the province added 337 nurses and 106 additional staff to answer incoming calls in March. The province has also added some 3,600 additional phone lines to the service, bringing the total to more than 4,000.

"The ministry has been working with Telehealth Ontario to help address the increased daily call volumes and reduce call-back wait times during this unprecedented time," said Hayley Chazan, a spokesperson for the Ministry of Health.

Calls that are deemed urgent, which include reports of one or more life-threatening symptoms, are answered between nine seconds and seven minutes, the province added.