Toronto and Peel officially enter Stage 2 of the pandemic reopening framework. Windsor-Essex remains the only region not cleared to move to the next phase, due to stubbornly high COVID-19 case numbers among migrant workers on farms.

Patios and hair salons were back in business in Ontario's two most populous regions on Wednesday, as the premier
announced that parts of the Windsor region will soon join them in Stage 2.

At his daily COVID-19 briefing, Premier Doug Ford announced a plan to reopen parts of Windsor-Essex, which until now has been the only region not cleared to move to the next phase of reopening due to stubbornly high COVID-19 case numbers among migrant workers on farms in the region.

Ford also announced a three-point plan to better support migrant workers, three of whom have died over the course of the pandemic, with advocates sounding the alarm over workers' often tight living conditions and limited ability to physically distance.

"A worker's passport does not determine how they are treated in our system," Minister of Labour, Training and Skills Development Monte McNaughton said. "That's not the Ontario way. If you're working in this province, I want you to know that your health and safety is a priority for our government."

The move for asymptomatic migrant farm workers to continue working while infected was met with outrage by the advocacy group Migrant Workers Alliance for Change, which said more farm workers will be exposed to the virus as a result. Authorities have warned that COVID-19 is transmittable even by those without symptoms.

"Ontario has responded to three farm worker deaths by signing a death warrant for more migrant workers. COVID-19 positive workers will be forced to keep working as they get sicker, keep infecting others, and more will die," says Syed Hussan, the group's executive director. 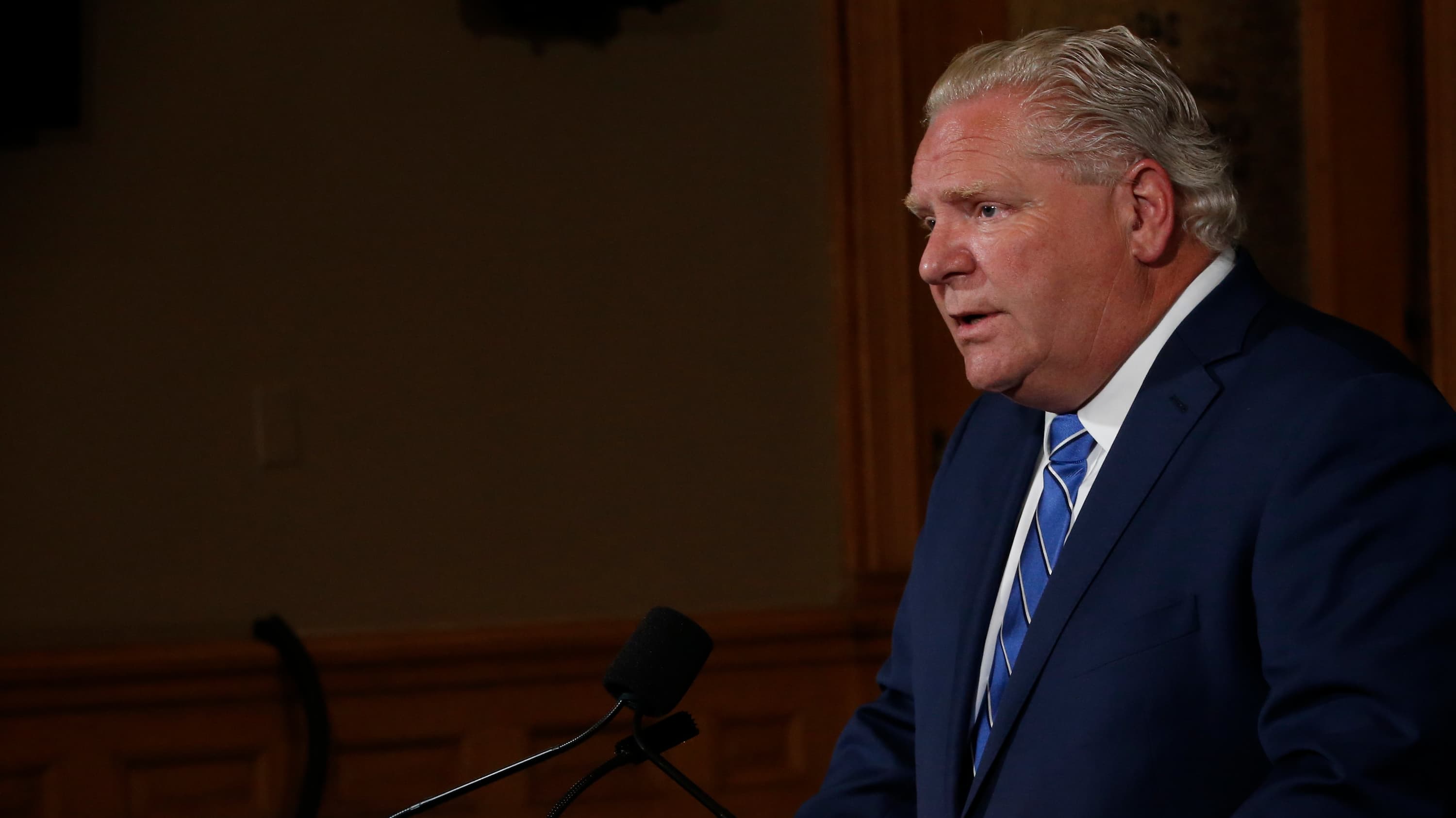 The group argues physical distancing is next to impossible in the conditions in which foreign workers work and that not all employers have cooperated with testing thus far.

So far, about 1,000 migrant workers have been tested out of the roughly 8,000 workers in Windsor-Essex. The province's chief coroner, Dr. Dirk Huyer, said he was encouraged by that number and the hope is that it will increase with the additional testing capacity.

Ford also reacted to reports of migrant workers being on the receiving end of racist remarks in recent days, saying Ontarians should be thanking them.

Toronto and Peel move into next phase of reopening

Meanwhile, Toronto and Peel Region moved into the next phase of the province's COVID-19 recovery plan.

The two regions officially enter Phase 2 of the pandemic reopening framework, joining nearly all of the rest of the province that began ramping up activities over the past two weeks.

The move comes as Ontario reported 163 new cases of COVID-19, the second-fewest on any single day since late March.

The 0.5 per cent increase in cases brings the total in the province to 34,016 since the outbreak began in late January. More than 86 per cent of those confirmed infections of the novel coronavirus are now resolved. Some 299 further cases were marked as resolved yesterday, the Ministry of Health said.

There are now 2,049 actives cases of COVID-19 across Ontario, 78 fewer than Tuesday.

Thirty of Ontario's 34 public health units reported five or fewer newly confirmed cases — a new high, according to Health Minister Christine Elliott — while 16 of those reported no additional cases at all.

Toronto and Peel account for 104 of the new cases reported today provincewide.

Businesses given the green light to resume operations in the two regions include hair stylists, pools and tour guide services.

Indoor malls are also able to begin letting in customers again. CBC News reporter Linda Ward shot this video inside Sherway Gardens, a shopping mall in the west Toronto suburb of Etobicoke that opened its doors this morning:

In all cases, the Ontario government says proper physical distancing measures must be maintained to prevent a spike in COVID-19 cases.

Some eateries and bars in Toronto opened their patios to patrons at exactly 12:01 a.m. overnight.

"We're just so happy that we can finally open up. It's been a tough four months, definitely, for us. So we wanted to jump on the opportunity and open up as soon as possible," said owner Peter Girges.

"I wouldn't have rushed it if we didn't know there was a demand for it. At the same time, July 1st is coming up and you can't get out of the bills on the first of the month. So it's going to help, every day and every night helps."

Girges told CBC Toronto his restaurant has been ready to open for several weeks now, and that staff were particularly excited to "to get back to work and get their lives back to normal"

"It was a little emotional to see all the staff back. This is basically our family, we do see each other more than we do see our own families," he said.

Guests were seated one table at a time, and servers were going through the patio asking patrons to sit down as much as possible and avoid congregating.

"We are doing our best to make sure we are following all the protocols that the city has asked," Girges said.

Yesterday, the Ministry of Health reported 216 new cases of COVID-19, the most in the last 10 days. Hospitalizations increased for the first time since June 2, while testing levels dropped after two weeks of consistently processing more than 20,000 samples each day.

He said yesterday that he would reveal a plan today to protect agricultural workers and get the Windsor-Essex region on track toward stage two of the province's reopening plan. The vast bulk of the region's active cases of COVID-19 are among migrant agricultural workers.

Ford has criticized farm owners for not doing enough to ensure workers are being tested. Two migrant workers from Mexico have died of COVID-19 in Windsor-Essex, while a third died in Haldimand-Norfolk.

Testing numbers back up today

Meanwhile, Ontario's network of about 30 community, commercial and hospital labs processed 23,207 novel coronavirus test samples yesterday. That's after the figure fell to about 16,000 the day before — well below numbers seen in the last two weeks. Another 21,398 test samples were added to the queue to be processed.

The number of patients in Ontario hospitals with confirmed cases of COVID-19 fell again, the Ministry of Health said, after increasing yesterday for the first time since June 2. Those being treated in intensive care units and with ventilators also both dropped, by two and six, respectively.

The province's official COVID-19 death toll grew by 12 and is now 2,631. A CBC News count based on data directly from regional public health units — which avoids lag times in provincial reporting — puts the real toll at 2,677 as of Wednesday evening.

About three quarters of all deaths in Ontario were residents of long-term care homes.

State of emergency extended to July 15

Meanwhile, Ontario has extended its state of emergency to July 15.

Ford has said he is hopeful that will be the last extension of the emergency declaration.

The motion passed the legislature this morning.

Many of the emergency orders made under the state of emergency are expected to continue even after July 15, including bans on large gatherings.

After the state of emergency expires, the province won't be able to make new emergency orders, amend them, or re-enact old ones, but existing ones can be extended.

Local medical officers of health will still have certain powers under the Health Protection and Promotion Act, which is what some have used to require masks in commercial establishments.