Elementary students in Ontario will be heading back to school full-time come September, the provincial government revealed today, while most high school students will split their time between the classroom and online learning.

In boards with high enrolment, high schools will use hybrid model

Elementary students in Ontario will be heading back to school full-time come September, the provincial government revealed today, while most high school students will split their time between the classroom and online learning.

Many of the two million or so students who attend-publicly funded schools in Ontario will need to adjust to a new reality, as COVID-19 safety measures will make for a new kind of learning experience.

"When it comes to keeping our kids safe, I won't take any unnecessary risks," said Premier Doug Ford at his daily COVID-19 briefing Thursday afternoon.

Elementary level students will remain a single cohort, five days per week, including for recess and lunch. Further, school boards will be required to provide the full curriculum. Class sizes will remain at the mandated maximum levels in place before the COVID-19 outbreak.

Secondary students in 24 "designated boards" — mainly in urban and suburban areas with relatively high student populations — will attend school on alternating days, in cohorts of about 15.

Students in Grades 4 through 12 will be required to wear a non-medical mask or cloth face covering while at school. Younger children will be encouraged, but not required, to do so.

Medical masks will be provided for teachers and other staff.

Meanwhile, parents will be able to opt their children out of in-person classes, if they wish. Children with special education needs who struggle with remote learning will be allowed to attend school daily for instruction. 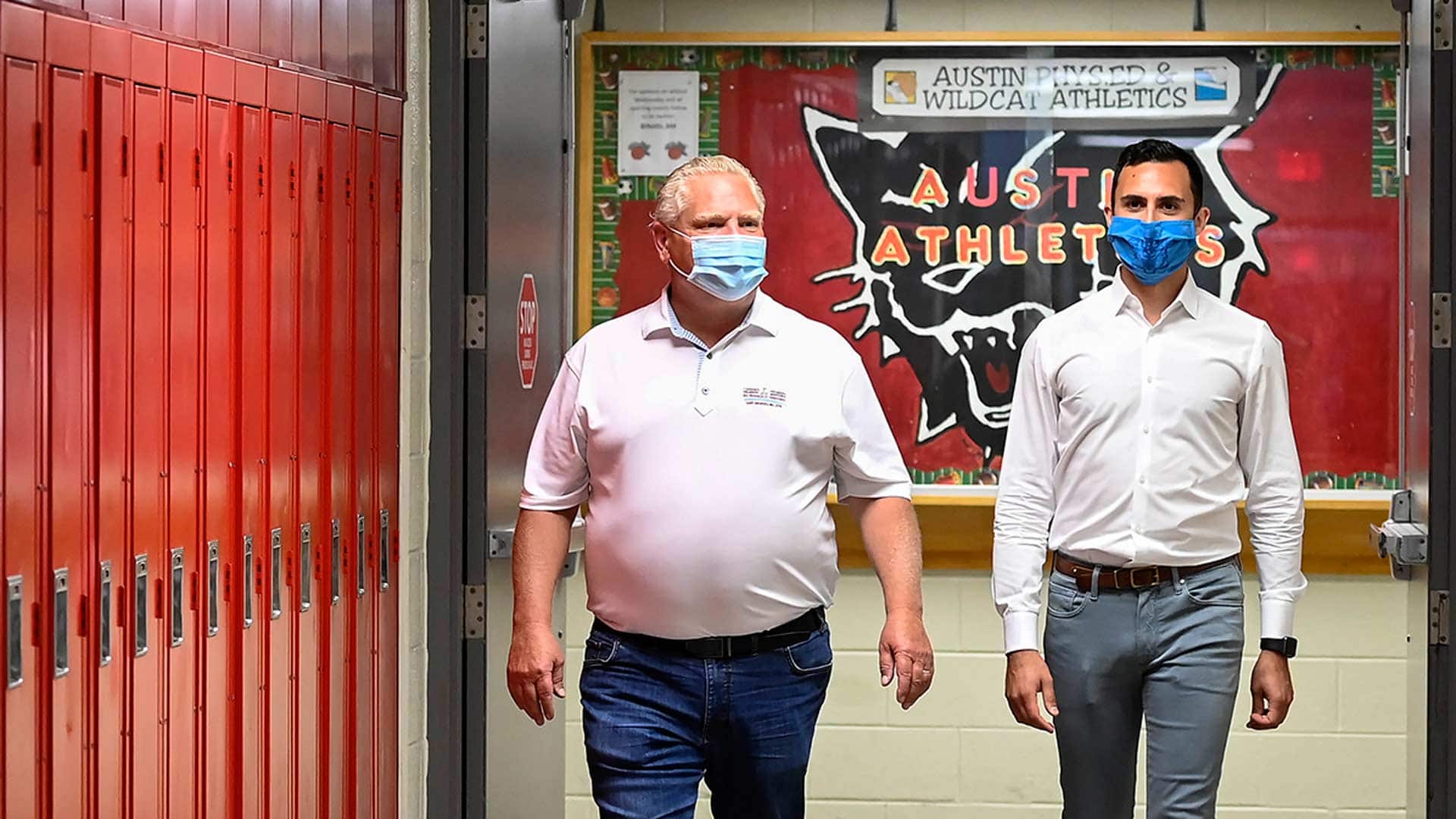 Ontario to reopen schools with mandatory masks for older students

3 months ago
2:04
Ontario’s plan to reopen schools in September includes mandatory masks for students in Grades 4 and up and giving parents the option for continued remote learning, but some say not enough is being done to mitigate the risks of COVID-19. 2:04

The province says other measures that will be in place to ensure the safety of students include:

When the academic year begins, schools can offer clubs and organized sports if physical distancing is possible and spaces are cleaned and disinfected between each use, the Ministry of Education says.

The ministries of education and health plan to establish a new "school health monitoring system" that will be used to track any possible cases of COVID-19 in facilities.

Students and staff who develop any COVID-19 symptoms will be "immediately separated." Anyone who tests positive won't be able to return to school until they are cleared by local public health officials, and those who test negative will need to be symptom-free for 24 hours before going back.

Public health officials will also undertake a targeted testing program for high school students, since they are at higher risk of transmission than younger children.

According to Dr. Barbara Yaffe, Ontario's associate chief medical officer of health, the government will hire as many as 500 additional public health nurses that will each be assigned to a "family of schools."

The nurses will liaise with parents, parent councils, teachers and administrators. They will be deployed to various boards based on enrolment numbers.

The provincial government says it will invest a total of $309 million into the plan, including:

"School reopening is critical to learning and development for Ontario's students, and a critical support for families to get back to work and allow for the re-opening of the economy," the government wrote in a briefing document for the media.

As for transportation, students will be given assigned seating on buses and a record of each seating arrangement will be kept for purposes of contact tracing.

Children from the same household will have to sit together, and drivers will be given protective equipment. Further, frequently touched surfaces like handrails and seat backs will be cleaned at least twice a day, provincial officials said.

Minister of Education Stephen Lecce said teachers who did not wish to go back into the classroom will still be required to provide online learning for students.

Yesterday, Toronto's Hospital for Sick Children released its own newly revised guidelines for reopening schools. The recommendations include staggered lunch times, no large assemblies and mandatory masks for older students.

Harvey Bischof, president of the Ontario Secondary School Teachers' Federation, said in a series of tweets that the government did not involve the union when it assembled its back-to-school strategy.

"We were not consulted, nor were we given an advance look at the plan," he said.

"[Ford and Lecce] have completely ignored education workers in this plan. One educator per cohort? What about the educational assistants who work 1-on-1 with students? The early childhood educators in kindergarten classrooms?"

Meanwhile, the Ontario Liberals slammed the Progressive Conservative plan as "half baked."

In a statement, Liberal Leader Steven Del Duca said it will amount to "nothing short of a catastrophe" and the government "blatantly ignores recommendations from school boards, teachers, health care associations and parents."

Del Duca said a draft plan put together by his party would require a $3.2.-billion investment to ensure the safety of students and staff.

"By shortchanging our schools, Doug Ford is putting our kids and our economy at risk," he said.

In a statement released by the NDP, education critic Marit Stiles said the Ford government's back-to-school scheme packs kids into overcrowded classrooms while forcing many high school students to do half their education alone at home with little to no help — putting students' health and academic success at risk

"Classrooms were already overcrowded, and the Ford government is sending kids right back into those packed classrooms. These kids should be in smaller class sizes so they can physically distance, and reduce the chances of spreading an outbreak," said Stiles.

The Landlord and Tenant Board (LTB) announced that it will gradually expand services in August, resuming consent eviction orders and scheduling hearings for non-urgent evictions.

The LTB plans to start conducting non-urgent eviction hearings by mid-August and into the fall.

Suze Morrison, the NDP tenant rights critic, will hold a news conference Friday at 10 a.m. to urge Premier Doug Ford to stop the thousands of potential evictions that are anticipated once the LTB resumes its services.

Twenty-eight of the province's 34 public health units saw five or fewer new cases, while 17 of those 28 reported no additional cases at all, Health Minister Christine Elliott said.

The number of patients in Ontario hospitals with confirmed cases of the illness declined, she said, as did the number of those in intensive care and on ventilators.

After a brief uptick in the middle of July, the five-day rolling average of new daily cases — a measure that smoothes peaks and valleys in the data — has been in consistent decline for the last week or so.

Ontario has now seen 39,075 confirmed cases of COVID-19 since the outbreak began in late January. Of those, about 89.3 per cent are considered resolved.

There are currently just under 1,400 active cases of the illness throughout the province.

The ministry's official COVID-19 death toll grew by three today and is now 2,772. A CBC News count based on data provided directly from public health units, a figure that avoids lag times in the provincial reporting system, puts the real toll at 2,806 as of yesterday evening.

Today's figures come one day after the province announced that Toronto and Peel Region, its two most populous areas, will move into Stage 3 of the COVID-19 recovery plan this Friday.

Stage 3 allows for activities such as indoor dining in restaurants, live performing arts shows and the reopening of movie theatres and playgrounds. It also permits larger gatherings of people, though physical distancing requirements remain in place.

Windsor-Essex, the only public health unit that has not been given a green light to proceed into Stage 3, logged 15 new cases today.

Speaking to reporters this afternoon, Lecce said that while recent days have been encouraging, Ontarians need to stay vigilant to ensure that schools can reopen safely in September.

"Our actions today will have a consequence on learning tomorrow," he said.