Ontario will see $7B COVID-19 recovery deal with Ottawa, as parts of province head to Stage 3 of reopening

Ford praised the newly announced deal with the federal government, which will see about $7 billion in funding to help Ontario's economy during COVID-19. Meanwhile, Ontario reported 111 new cases of COVID-19 on Thursday, while the chief medical officer urged people to practice safe behaviours in Stage 3.

Meanwhile, Premier Doug Ford praised the newly announced deal with the federal government, which will see about $7 billion in funding to help Ontario's economy during COVID-19.

Ottawa's funding — a total of $19 billion for the provinces and territories — is expected to help fund things like child care, contact tracing and personal protective equipment.

The money will also be used to bail out municipalities that are faced with soaring expenses and plunging revenues due to the pandemic — something urban leaders like Toronto Mayor John Tory have repeatedly pushed for.

The deal comes after weeks of at-times testy negotiations between the federal Liberal government and the provinces and territories.

'We want to do Stage 3 really well'

Ford's comments come as several parts of Ontario move to Stage 3 of the province's reopening plan on Friday. As of 12:01 a.m. 24 public health units will can see the return of things like indoor dining in restaurants, live performing arts shows and the reopening of movie theatres and playgrounds.

As more businesses reopen, Ontario's Chief Medical Officer Dr. David Williams urged people to get into the habit of safe behaviours to limit the spread of COVID-19.

"We want to do Stage 3 really well," Williams said, because it will improve outcomes for things like schools re-opening.

Continue physical distancing, limit public interactions, stay home if sick, and wear a mask in public settings, he said."Know who your contacts are," Williams added, in case somebody gets sick.

Williams said people need to "continue to learn" how to live safely in their social circles.

In Stage 3, "do those extra things you've been missing, but do them with the same precautions," he said.

Williams said numbers were heading in a positive direction, as additional COVID-19 cases bring the total in Ontario to 37,163. Of those, slightly less than 89 per cent are considered resolved by the Ministry of Health.

Ford spoke in Chatham, Ont. as part of a summer tour of the province that started this week. Leamington and Kingsville were the last two areas in the province to move to Stage 2 due to high rates of COVID-19, primarily among migrant farm workers in the area.

Ford was asked about giving permanent status for workers upon arrival in Canada, as some fear that getting tested for COVID-19 will get them deported. Ford said nobody will be "kicked out," however, he did not comment on the idea of permanent status. 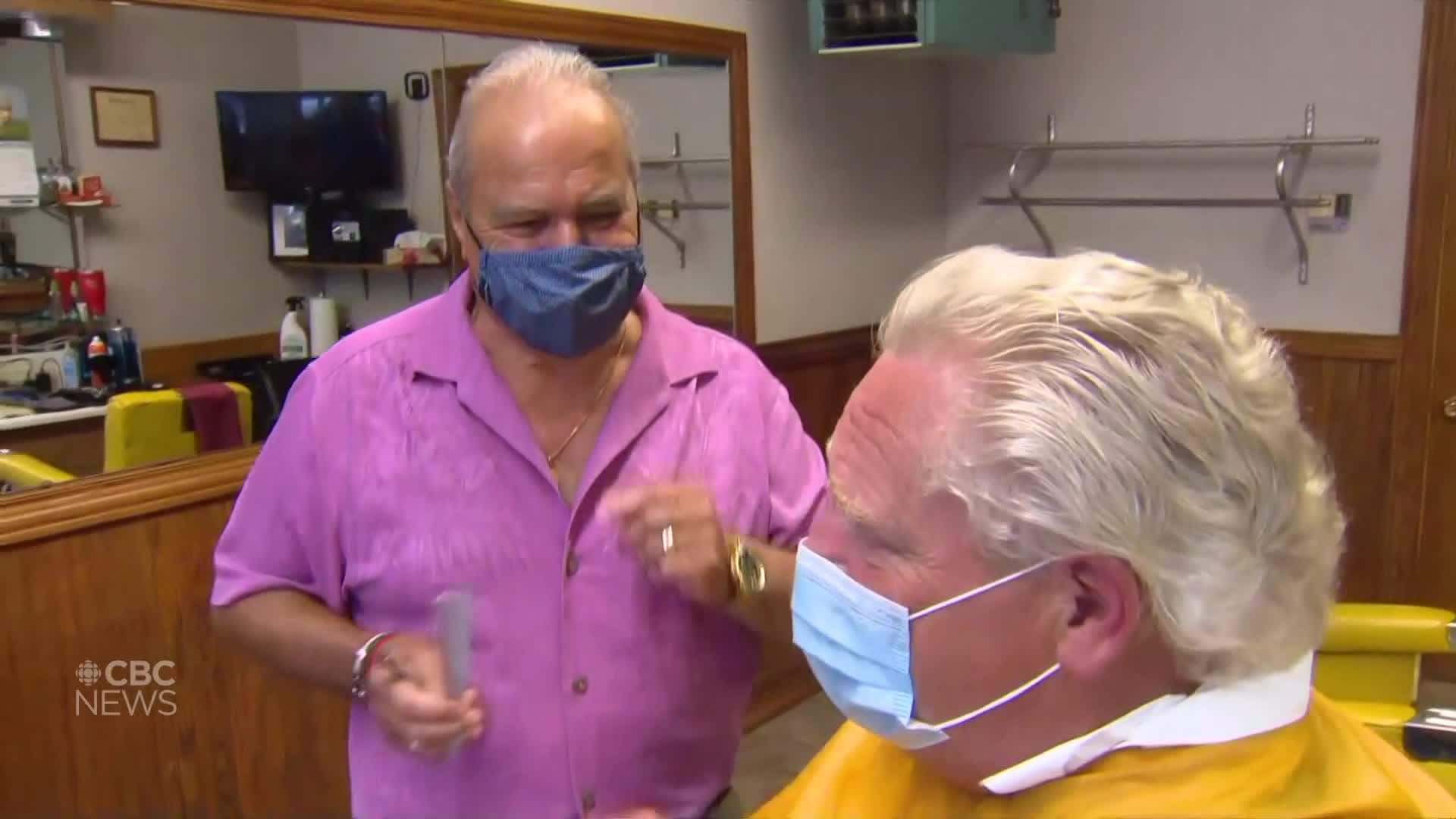 Doug Ford gets a haircut

5 months agoVideo
1:02
After weeks of saying he wouldn't get a haircut until everyone in the province could, Premier Doug Ford got a trim on Thursday. 1:02

The Ford government also said Thursday it will speed up previously promised support for farmers by one year, by immediately implementing the $50-million expansion to the agriculture risk management program.

Ford released video of his haircut Thursday morning in Leamington. The premier had said he would not get his hair cut until everyone in the province could do the same.

units reported five or fewer new cases today, while 19 of those 30 confirmed no new infections of the novel coronavirus at all.

Today's newly confirmed cases are concentrated primarily in Toronto, Peel, Windsor-Essex and Ottawa. Younger people age 20 to 39 still make up the highest number of new cases, and Williams said there are still some travel-related cases.

Williams said a number of COVID-19 cases are in more diverse neighbourhoods with lower socio-economic status.

There are now about 1,365 active cases of COVID-19 provincewide, and the five-day rolling average of new daily cases — a measure that smoothes peaks and valleys in data — has been in consistent decline since early June.

Further, the number of patients in Ontario hospitals with confirmed infections continues to drop, with just 107 reported today — the fewest since the Ministry of Health began reporting hospitalization figures in early April.

Twenty-six people are being treated in intensive care units, and 20 with ventilators, which Williams noted is a decline.

The province's network of labs processed 26,492 tests of the novel coronavirus in the last 24 hours. Another 25,297 are sitting in the queue waiting to be completed.

The ministry reported an additional five COVID-19-linked deaths today, bringing Ontario's official death toll from the illness to 2,737. A CBC News count based on data from public health units, which avoids lag times in reporting, puts the real current toll at 2,770.

The orders cover the redeployment of health care workers and temporary management of long-term care homes. They also prohibit price-gouging.

For those looking to get hitched, the province is also extending the expiry date for most marriage licences issued since December.

Marriages licences will be valid up to 24 months after Ontario's state of emergency ends, the government said.

With files from Lucas Powers, Laura Howells and the Canadian Press