A large swath of Ontario will move to Stage 3 of the province's reopening plan on July 17, with the exception of the Greater Toronto Area and other parts of southern Ontario, which will remain in Stage 2 for now.

A large swath of Ontario will move to Stage 3 of the province's reopening plan on July 17, with the exception of the Greater Toronto Area and other parts of southern Ontario, which will remain in Stage 2 for now.

The province's plan will allow for activities such as indoor dining in restaurants, live performing arts shows and the reopening of movie theatres and playgrounds — albeit with significant health and safety measures in place, including physical distancing, enhanced cleaning protocols and Plexiglas barriers.

"Every corner of our province is getting back to work," Premier Doug Ford said at a Monday news conference.

"Today, we are ready to take the next step."

Work colleagues, including performers and crews, do not count toward gathering limits, according to the province.

The following public health units will remain in Stage 2 for the time being:

"These regions entered Stage 2 later on, so we need just a little more time," Ford said. "I want the people in these regions to know we won't leave anyone behind.

"We will keep working until every part of this province gets to Stage 3."

The plan also says that people gathering inside for religious services, weddings or funerals can continue to fill up to 30 per cent of a room's capacity in Stage 3.

It also dictates that sport facilities and gyms can reopen but notes that physical distancing still must be maintained, "except if playing a team sport or as needed for personal training."

Amusement parks and water parks are not being allowed to reopen in Stage 3 at the moment.

WATCH | Premier Doug Ford outlines what Stage 3 of reopening in Ontario will look like: 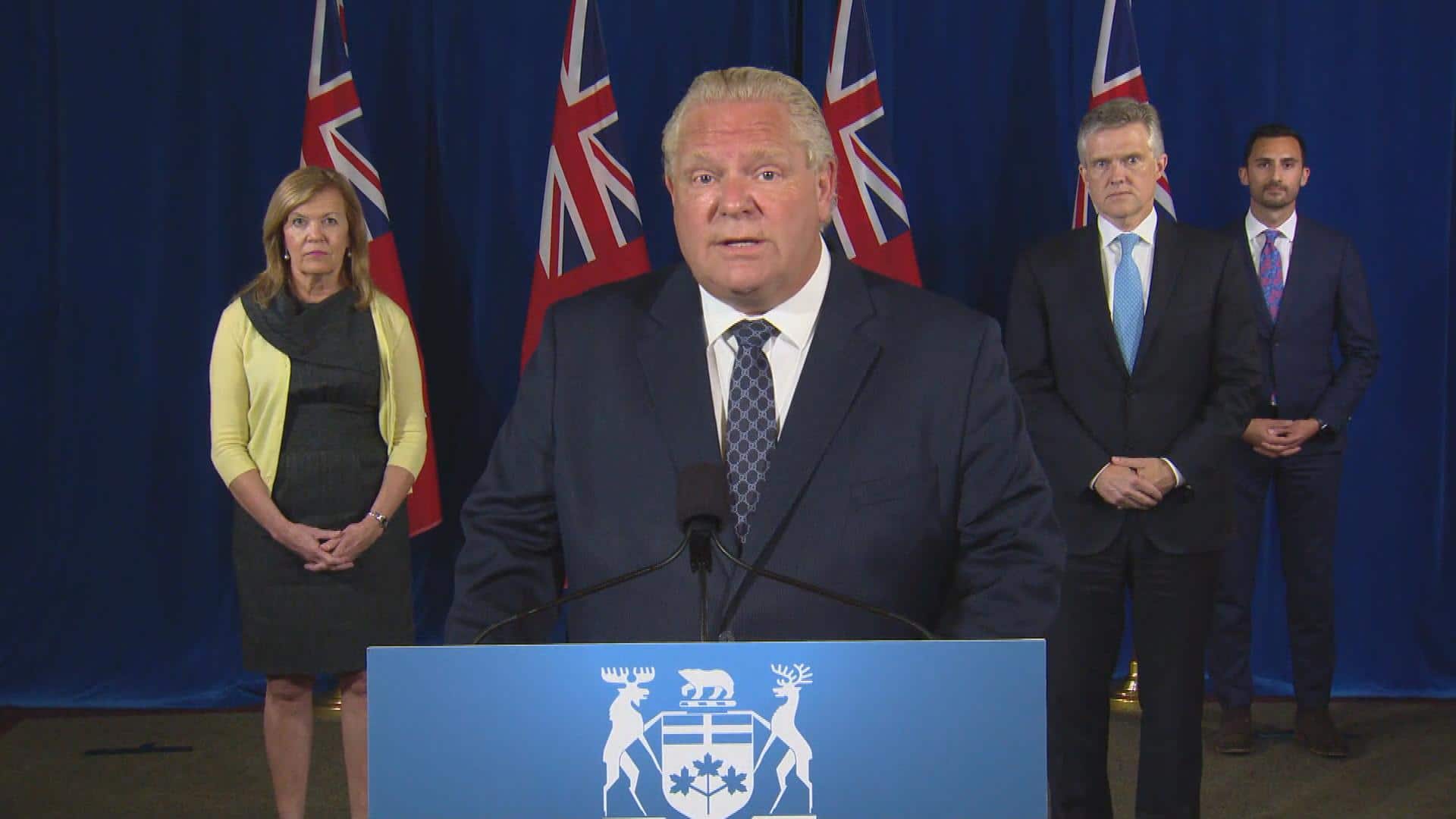 3 months ago
3:25
Dine-in restaurants, bars, movie theatres and gyms are among the businesses allowed to reopen in parts of Ontario on Friday, according to Premier Doug Ford. 3:25

"We expect the province will remain in Stage 3 for the foreseeable future," Elliott said.

She also said that health officials will be monitoring for any COVID-19 outbreaks and can tighten restrictions if there are flare-ups. Provincial Medical Officer of Health Dr. David Williams said Monday that he is hoping the entire province will be able to be in Stage 3 by the end of July.

Elliott also said social circles for people in Ontario will remain capped at 10 for now. The province can gradually expand them, but "just not right yet," she said.

Finance Minister Rod Phillips said Ontario is in a "strong position" to reopen right now, especially compared to areas in some other countries being hard hit by COVID-19.

"We're in this position because we have made the choice to act responsibly and treat each other with respect," he said.

He said that respect is key in Stage 3 to "avoid taking a step backwards."

Provincial officials pointed to the situation in the United States as a cautionary tale Monday. Canada's southern neighbour opened the week grappling with the highest number of COVID-19 cases in the world after Florida shattered the national record for a state's largest single-day increase in new confirmed cases.

The World Health Organization warned that the pandemic is worsening globally and that "there will be no return to the old normal for the foreseeable future."

Williams said it seems the U.S. opened too quickly and is now having to backtrack.

"We do not want to repeat or have anything like that," he said.

The loosening of restrictions comes as the spread of COVID-19 continues to slow in Ontario, with new daily case numbers having steadily declined over the last five weeks.

In a series of tweets this morning, Elliott noted that 29 of Ontario's 34 public health units reported five or fewer additional cases today, while 21 of those 29 confirmed no new cases at all. There are currently fewer than 1,500 active cases provincewide.

Further, the number of patients in Ontario hospitals with infections of the novel coronavirus also continues to fall, she said. There were five times as many people being treated in hospital for COVID-19 at the beginning of June than there are now.

"Having seen a continued decline in the number of new [COVID-19] cases as the province entered Stage 2, and with hospitalizations being at all-time lows, today we're providing details about Stage 3 of our plan to continue the safe and gradual reopening the province," Elliott wrote.

Twenty-four public health units entered Stage 2 on June 12, and seven more on June 19. Toronto and Peel, the province's most populous health units, then proceeded into Stage 2 five days after that. The move included reopening patios and hair salons.

The president and CEO of the Ontario Hospital Association is already expressing some hesitations at the prospect of entering the third phase.

"Given that hospitals continue to act as the anchor of Ontario's response to COVID-19, [the OHA] will be giving this announcement some serious scrutiny," Anthony Dale wrote on Twitter.

"We can't have hallway health care in a pandemic."

The additional cases of COVID-19 reported today mean that Ontario has now seen a total of 36,839 infections of the novel coronavirus since the outbreak began in late January.

Of those, 88.7 per cent are considered resolved by the Ministry of Health.

The province's official death toll from the illness grew by three in today's report and now sits at 2,722. A CBC News count based on data provided directly by public health units, however, puts the real toll at 2,756 as of yesterday evening.

About three quarters of all deaths were residents in long-term care homes. Health officials are currently tracking ongoing outbreaks in 23 facilities.

Meanwhile, Ontario's network of about 30 community, commercial and hospital labs processed some 20,896 test samples for the virus since the last update. Another 7,837 are in the queue waiting to be completed.

You can read the province's plan for Stage 3 here:

With files from Adam Carter, Lucas Powers, Mike Crawley, The Associated Press and The Canadian Press