Ontario must see a "consistent two-to-four week decrease in the number of new daily COVID-19 cases" before the government can start loosening restrictions and begin reopening the economy, says a new framework for reopening released by the province.

Large gatherings like concerts, sporting events will be restricted for 'foreseeable future'

Ontario must see a "consistent two-to-four week decrease in the number of new daily COVID-19 cases" before the government can start loosening restrictions and begin reopening the economy, says a new framework for reopening released Monday.

The province will reopen its economy through a three-stage process in the coming weeks and months, says the document, though there's no firm date as to when that will begin. You can read the entire report for yourself at the bottom of this story.

"This is a roadmap, not a calendar," Premier Doug Ford said at a news conference where he was joined by Minister of Health Christine Elliott, Minister of Finance Rod Phillips and Vic Fedeli, minister of economic development, job creation and trade.

"We won't be rushed into anything," Ford said, adding that while Ontario is believed to be at its peak in terms of the outbreak, how long that peak lasts has yet to be seen.

"If precautions are not taken, one person infected with this virus can spread it to hundreds of others," said Ford.

"Progress doesn't mean we can quit now and that's why I won't set hard dates until we're ready, because the virus travels at its own speed."

According to the province, the stages for reopening are as follows:

Each stage will last at least two to four weeks, at which point Ontario's chief medical officer of health will be able to tighten certain restrictions, extend the stage or advise that the province can move into the next phase.

So how far away is the province from that first phase? Ontario's top doctor, Dr. David Williams, shed some light on that Monday, saying as of now the province remains in the "pandemic phase" of the outbreak.

Williams said last week that the province would need to see fewer than 200 new cases daily for an extended stretch before relaxing COVID-19 emergency measures would be feasible.

With the province still falling somewhat short of its goal of processing 13,000 tests per day, whether the number of new cases being reported daily reflects the true number of new infections remains a question. Determining accurate daily case counts requires ongoing "rigorous testing" and monitoring, as provincial officials have noted.

In the last 24 hours, the province has conducted approximately 12,500 tests, but lagged well behind the target in previous weeks.

Asked how new infections continue to be confirmed in the hundreds despite physical distancing measures, Williams said Monday that's a question he'd like the answer to himself. In some cases, public health officials have found interviewees have not properly been adhering to the restrictions, choosing to get together thinking doing so might be "benign."

Williams added that 50 to 60 per cent of new confirmed cases each day are people not in long-term care or other institutional settings, suggesting the virus continues to infect people at the community level. 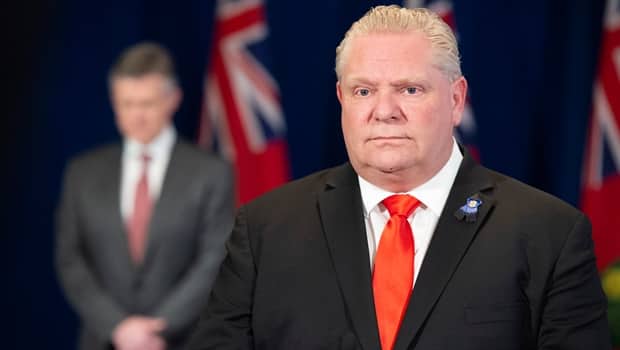 10 months ago
0:57
Doug Ford says the province has 'flattened the curve' against COVID-19 but warns the timing to allow businesses to reopen still depends on some strict criteria. 0:57

The framework released Monday notes that health and safety "will continue to be a top priority as Ontario transitions to a 'new normal', emphasizing public health officials will have input during each phase of the process.

But exactly when and how Ontario begins reopening will depend on a number of factors, including:

A state of emergency was first declared in Ontario on March 17, an order that has been extended several times in the weeks since. It is currently expected to remain in place until at least mid-May, and last week Ford played down the possibility that people could expect to see a return to normalcy by the Victoria Day long weekend.

Businesses deemed non-essential by the government remain closed, as do other services like child-care centres, libraries, recreation facilities and places of worship.

The province has also introduced a $17-billion relief package that includes an influx of cash for the health sector, direct payments to parents, and tax breaks for affected businesses.

Watch: The three key things that must happen before Ontario eases COVID-19 restrictions 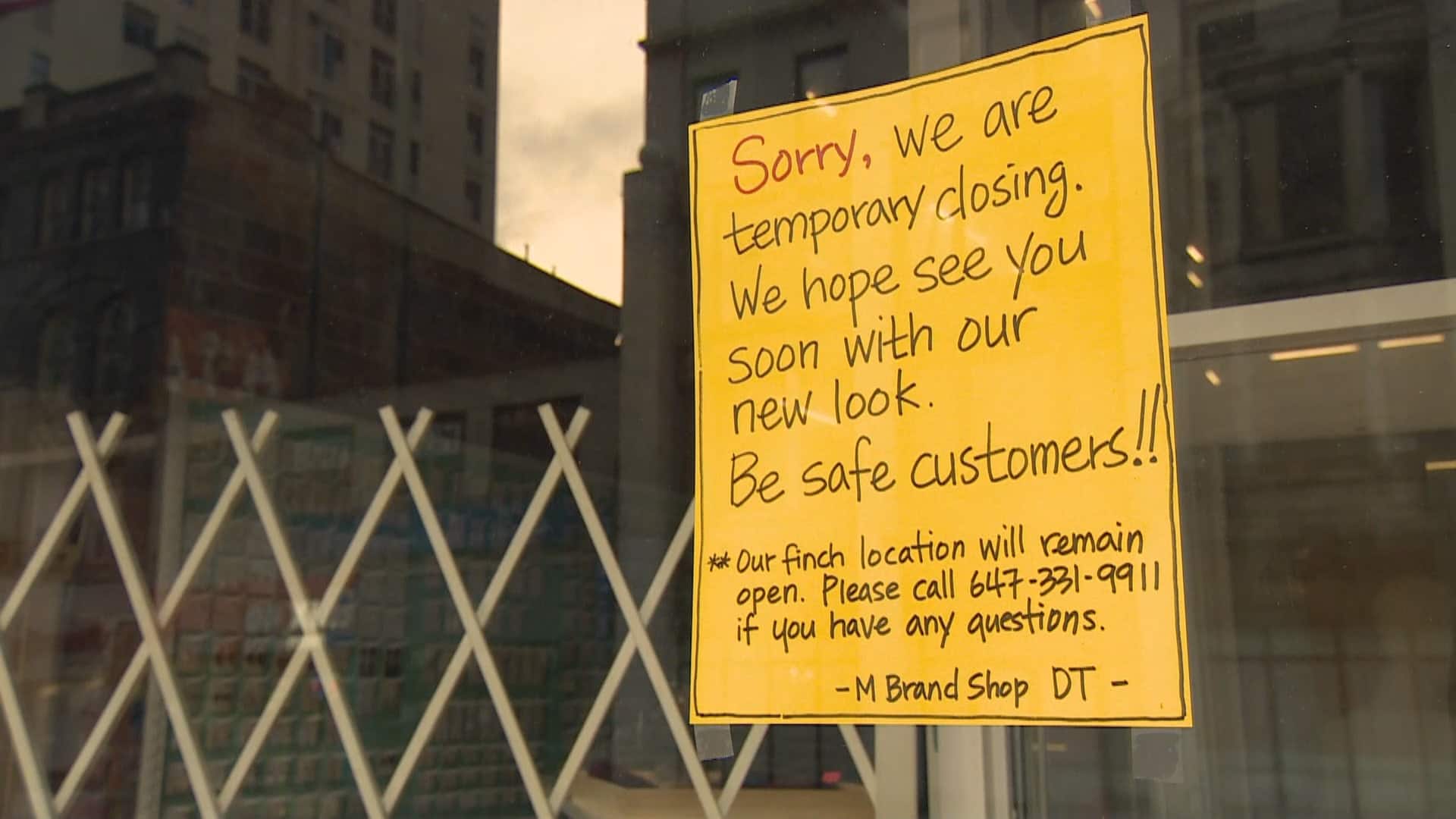 11 months ago
2:07
Queen’s Park reporter Mike Crawley speaks to experts about three key things they think need to happen before Ontario pulls back on its restrictions. 2:07

Meanwhile, the number of COVID-19 patients in intensive care units and on respirators in Ontario both fell slightly on Monday, as the cumulative tally of cases since the outbreak began pushes to nearly 15,000.

Ontario's Ministry of Health reported 424 newly confirmed cases in its latest update, bringing the total number in the province to 14,856 and marking several consecutive days of falling growth rates in new cases. More than 57 per cent of the total cases are now resolved.

The official death toll from COVID-19 in Ontario currently sits at 892, though figures compiled by CBC from regional public health units put the number of dead at 1,002.

Some 671 of those deaths were residents at long-term care facilities, including 57 new deaths reported today. The province is currently tracking outbreaks at 150 of Ontario's 626 long-term care homes. More than 2,500 residents have tested positive for the novel coronavirus provincewide, as well as 1,187 staff members.

While those hospitalized with the novel coronavirus increased to 945 from 938, the number of patients being treated in ICUs fell from 252 to 241. Patients on ventilators dropped from 195 to 191.

Dr. Eric Hoskins, former Ontario health minister in the Kathleen Wynne government and a public-health doctor, said the time to reopen the province "carefully" is now.

Hoskins told CBC TV's Power and Politics that the reopening plan unveiled by Ford on Monday gives useful information to Ontario residents and is a good start, but he said everyone needs to remember what the lockdown was for.

"What was the reason why we told people to stay at home, where we are all self-isolating? And the reason was because we wanted to avoid overwhelming our health-care system," Hoskins said.

"We wanted to make sure that we didn't have to make the same difficult decisions that Italy had to when they had one ventilator and multiple patients ... In fact, that surge that we were expecting didn't happen. Our health-care systems are coping extremely well," he added.

Hoskins said Ontario is now in a good position. The province has 6,000 empty hospital beds and about 190 patients with COVID-19 on ventilators, but it has more than 2,000 ventilators ready to go and unused at the side of critical-care beds, he added.

For example, he said some medical procedures, such as elective surgery, cancer treatments, mammograms and cardiac care, could be started again where physical distancing can be maintained and if a hospital is ready and has sufficient personal protective equipment.

"We need to start to reopen that, bit-by-bit," he said.

Over the weekend, Ontario's minister of education Stephen Lecce announced publicly-funded schools will remain closed until at least May 29.

The framework for re-opening the province comes one week after public health officials said that models suggest community spread of the novel coronavirus in Ontario "appears to have peaked" and that the daily count of new cases is expected to decline in coming weeks.

10 months ago
0:49
Ontario Premier Doug Ford says he can't give a date on when pro sports might return to the province. 0:49

They added, however, that the situation in the province's long-term care facilities and other congregate settings, such as shelters and jails, continues to get worse.

Orchard Villa has seen 48 of its residents die, Eatonville has had 37 deaths, and Altamont has seen 32 residents and one personal support worker die.

Seven other long-term care homes in Ontario have had more than 20 residents die in COVID-19 outbreaks.

Here's the full government report on reopening Ontario's economy. If you're on mobile, click here.

With files from Shanifa Nasser, Lucas Powers and The Canadian Press