"Stay home, stay informed, stay healthy and stay calm." That was the message from Ontario's medical officers of health, as the province declared a state of emergency on Tuesday in a bid to combat the spread of COVID-19 and prevent the novel coronavirus from overwhelming the health-care system. 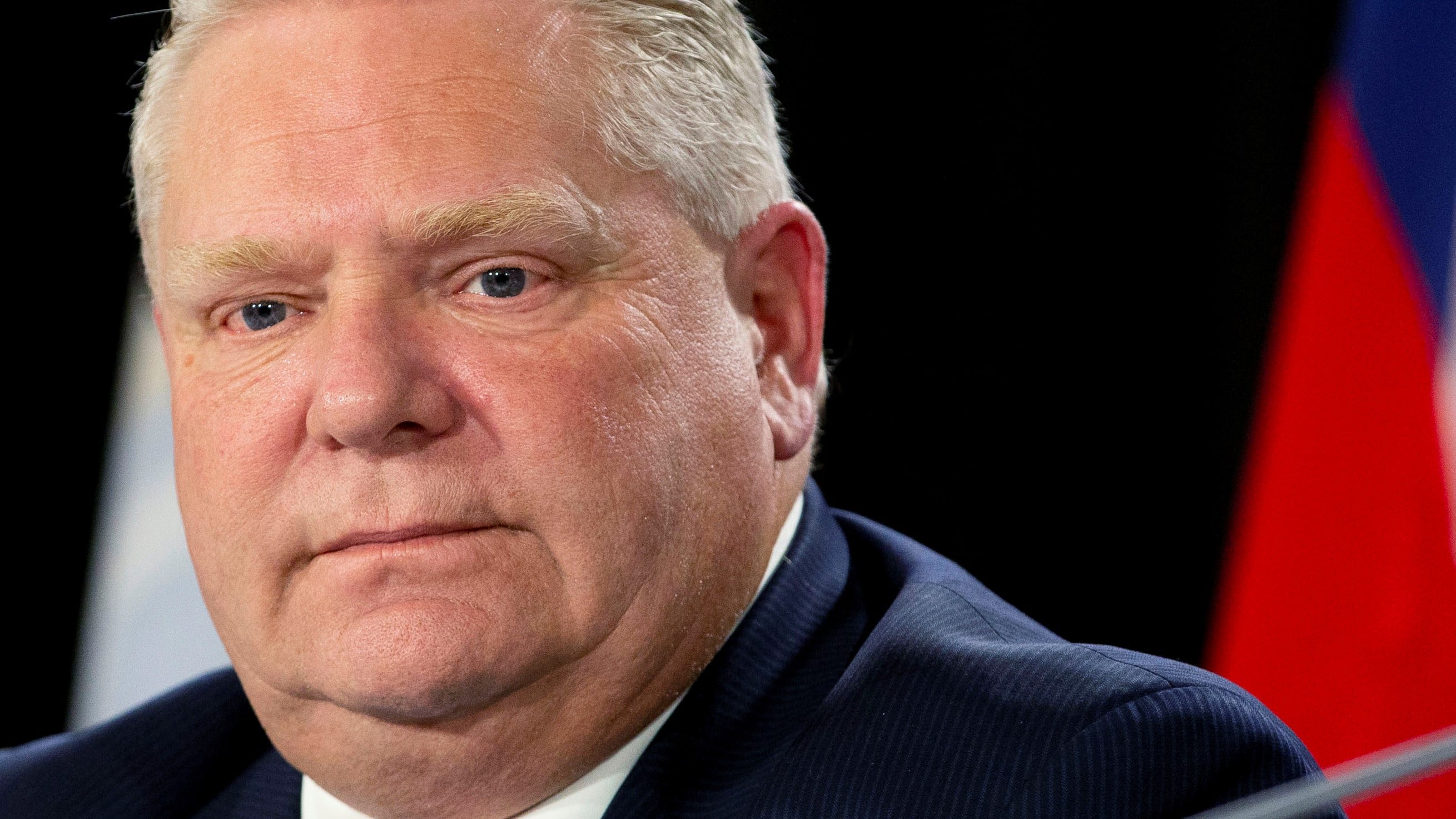 12 months ago
9:51
Saying we must flatten the curve and slow down the spread of COVID-19, Ontario Premier Doug Ford declares a state of emergency. 9:51

That was the message from Ontario's chief medical officer of health, Dr. David Williams, as the province declared a state of emergency on Tuesday in a bid to combat the spread of COVID-19 and prevent the novel coronavirus from overwhelming the health-care system.

The move came as Ontario recorded its first COVID-19-related death: a 77-year-old man at Royal Victoria Hospital in Barrie, about 100 kilometres north of Toronto. Officials say the man himself wasn't a confirmed case before he died; rather, he was under investigation for the virus. COVID-19 was discovered after his death.

At a news conference Tuesday afternoon, Ontario's associate medical officer of health said the man had contracted the virus through close contact with another man with the virus, but it is not yet clear whether he died with the virus or because of it.

By Tuesday evening, three new cases were confirmed in Kingston, Ont, bringing the total to 188. All three had recently returned to Canada from Europe or Barbados.

Another 1,567 people in Ontario are being tested for the virus.

With 11 new confirmations, Tuesday saw a relative drop in new cases compared to previous days. However, Ontario's chief medical officer of health said that does not necessarily indicate a downward trend.

"It will have its ebbs and flows," Williams said. "We'll probably have quite different numbers again tomorrow … It would be nice to think that could happen that quickly."

Ontario Premier Doug Ford didn't reference the death during his remarks Tuesday, but he did underscore the danger that the coronavirus poses.

"We're facing an unprecedented time in our history. This is a decision that was not made lightly," Ford said at a morning news conference at Queen's Park. He was joined by Ontario Solicitor General Sylvia Jones, Health Minister Christine Elliott, Finance Minister Rod Phillips and Williams.

COVID-19 constitutes a danger of major proportions," he continued. "We must act decisively. We must not delay."

As part of the declaration, the province will mandate the closure of restaurants and bars, though those that can offer takeout and delivery can continue selling food items.

Also Tuesday, the LCBO announced it was reducing its hours, saying stores would only operate from 11 a.m. to 6 p.m.

"This measure follows previous action taken to elevate store cleaning and sanitization protocols and increased prevention awareness amongst employees," the LCBO said in a news release. Delivery will still be available to customers, but stores will not accept returns.

The province is also prohibiting gatherings of more than 50 people, including at indoor recreation centres, theatres and concert venues, libraries, places of worship, private schools and licensed daycares until March 31. Ontario previously ordered all publicly funded schools to close until April 6.

The order does not yet apply to public transit, shopping malls, grocery stores and pharmacies, Williams said.

Ford stressed that the state of emergency does not constitute a "provincial shutdown."

"The vast majority of businesses, including those most vital to day-to-day life, will not be affected by this order," he said. 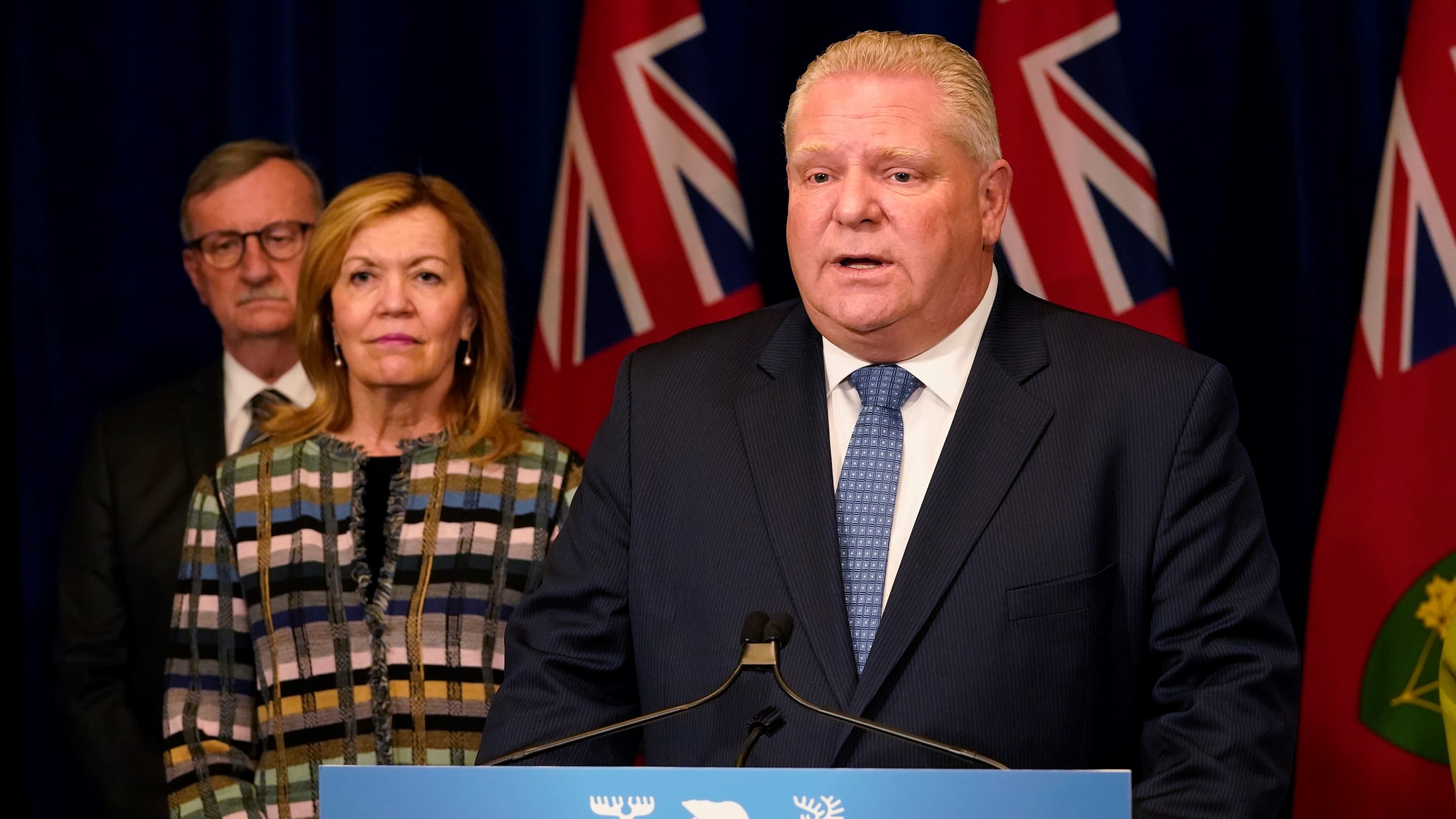 12 months ago
26:25
Premier Doug Ford and senior officials defended Ontario's new $300 million emergency relief fund and the declaration of a state of emergency.   26:25

At the news conference, Ford also announced the "first stage" of a COVID-19 emergency relief fund. He said that $300 million — $100 million from the province and $200 million from Ottawa — will be used to add 75 critical-care beds and 500 post-acute care beds at Ontario hospitals. It will also go to establishing 25 more COVID-19 dedicated assessment centres in the province.

Ford added that the funds will be used to purchase more personal protective equipment for medical professionals and backfill 1,000 additional nurses and personal support workers at hospitals dealing with an influx of cases. Fifty physicians will also be assigned for primary and emergency care in Indigenous, rural and remote communities in Ontario, Ford said.

Additional measures could be implemented in the coming days, he said. Scrapping time-of-use electricity pricing is being considered, Ford said, as people are now largely at home during the hours with peak rates.

The legislation that gives the premier and his cabinet the power to declare a state of emergency is the Emergency Management and Civil Protection Act. Among the powers it gives to the premier is the authority to close "any place, whether public or private, including any business, office, school, hospital or other establishment or institution."

Meanwhile, provincial and Toronto health authorities have said that community spread of the illness can no longer be ruled out.

In a statement, Mayor John Tory, who held a news conference at 2:30 p.m., said he welcomed the decision to declare a state of emergency.

"I hope the seriousness of this declaration will make it clear to every resident how important their personal actions will be in the coming days," he said.

Speaking from his home in self-isolation, Tory said Toronto City Hall, Metro Hall and city civic centres will be closed to the public starting Wednesday, as the city moves to scale back non-essential services until April 5.

Non-essential city staff are being sent home, but will continue to be paid and may be recalled on an as-needed basis, the mayor said.

"We are doing this in the interest of setting an example," he said, adding that keeping non-essential staff working would counter the message being sent to residents to stay home as much as possible.

On the question of enforcing the provincial order announced Tuesday, Tory said he is hopeful that won't be necessary and that people will work together to do what's in the city's best interest, but added he will ultimately support whatever government health officials might recommend.

In his update, Tory also thanked health-care workers and city staff among others for helping to keep residents safe.

Some medical professionals, however, said that the emergency measures outlined by the province do not go far enough.

Dr. Michael Warner, director for critical care at Michael Garron Hospital in east Toronto, told CBC Radio's The Current that he is "highly concerned that our elected officials are not mandating social distancing to the degree required."

Limiting group gatherings to 50 people is still too many, he said.

"The attack rate for COVID-19 is estimated to be between 30 and 70 per cent. If we take a group of 50, that means 15 to 35 people in that group can be infected by one person," Warner continued.

"We need to shut everything down right now."

At a news conference on Monday, Ford and several ministers had outlined additional impending legislation to ban employers from demanding sick notes for those in self-isolation or quarantine because of COVID-19.

Employers will also have to ensure protected leave for workers who have to take unpaid leave to be in self-isolation or quarantine.

The provincial legislature is scheduled to sit on Thursday, and Ford said he hopes to have all pending measures passed in a single day with the co-operation of the Opposition NDP.

If you have lingering questions about COVID-19 in Canada and how it may affect you and your family, you may find this CBC News guide helpful.

With files from Mike Crawley, Lucas Powers, Shanifa Nasser and The Canadian Press