An additional 44 cases of COVID-19 were confirmed in Ontario on Thursday, bringing the provincial total to 258 including two deaths and five resolved cases. 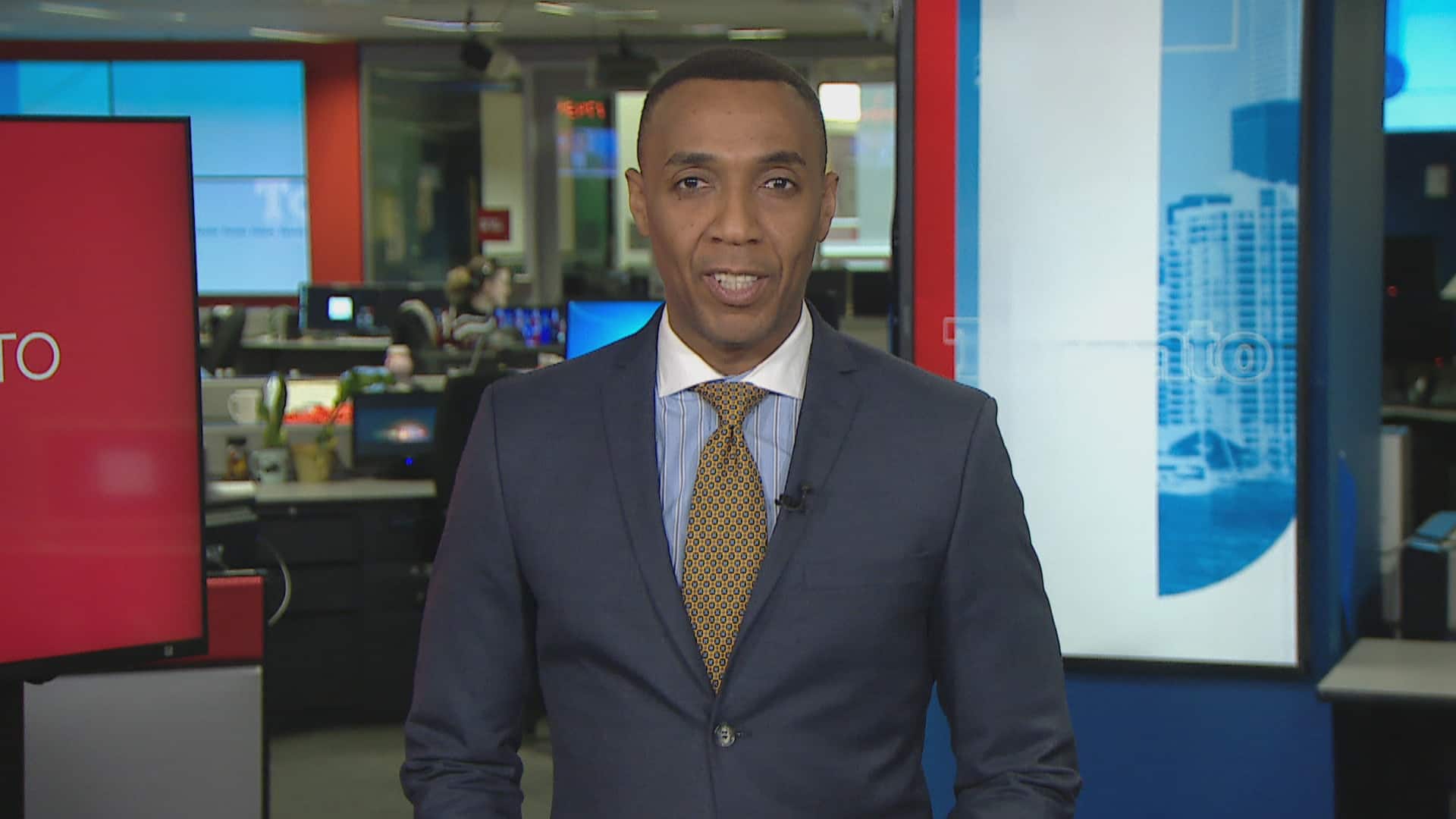 10 months agoVideo
9:29
The details of Ontario's second coronavirus-linked death, concerns over the number of ICU beds and ventilators in hospitals amid the growing need and what came out of the province's emergency session today: Dwight Drummond brings us the latest on the coronavirus pandemic.  9:29

Health officials in Halton Region say Ontario's second coronavirus-linked death, a Milton man in his 50s, is a case of community transmission.

"At this time what we know is that the individual did not travel outside of Canada recently nor was he a contact of a known case of COVID-19," Dr Hamidah Meghani, Halton's medical officer of health, said at a news conference on Thursday.

An additional 44 cases of COVID-19 were confirmed in Ontario on Thursday, bringing the provincial total to 258 including two deaths and five resolved cases. Of those confirmed cases, 22 are currently hospitalized. The province remains under a state of emergency.

Meghani said the man had an underlying health condition, and that he had initially been treated at Milton District Hospital, but was transferred yesterday to Oakville Trafalgar Memorial Hospital where he died the same day.

"We need to act now, this is the tragic proof that we need to work together to slow down the spread of COVID-19, not only as individuals but as a community, we need to take this seriously," Meghani said.

"Gatherings and parties can wait, play dates can wait, some of your errands can also wait, allow your life to pause. Focus on what is important."

Health Minister Christine Elliott said the province's coroner will investigate to confirm whether or not coronavirus was the main cause of the man's death.

Dr. Barbara Yaffe, Ontario's associate chief medical officer of health, confirmed Thursday the death was COVID-19-related. She said so far they have not identified a connection to the case with travel, but cautioned that they are not finished with the investigation.

"It'll take a few days and they may or may not be able to determine where he got it," Yaffe said.

Most cases come after travelling internationally

Of the confirmed cases in Ontario, 80 per cent of the patients have travelled outside of Canada. Of those cases, 28 per cent returned from the U.S. and 26 per cent travelled in Europe, Yaffe said.

The most common U.S. states infected patients have travelled from are New York, Colorado, California, Nevada and Massachusetts.

Fifteen per cent of all cases in Ontario come from close contact with an infected individual.

"The 45 [new cases] today seems surprisingly low with the flow coming in, but I won't be surprised if it goes up," Williams said.

Hospitals in the province are now rigorously screening visitors in the same way long-term care homes have been. Anyone who has travelled in the last 14 days or has come into contact with someone who has will be turned away.

"If you're ill you should not be visiting," Williams said.

However, if someone is there to see a loved one they may be able to negotiate with the facility on a case-by-case basis. They may be asked to take special precautions, like wearing protective clothing and masks.

Concerns over waits for test results

The number of cases under investigation in the province stands at 3,972. Health professionals told CBC Toronto on Wednesday that the wait period for test results in the province is currently between five and seven days.

This means the new infection numbers being reported each day actually represent the spread of the virus several days ago, raising questions about the actual current rate of transmission.

One of the new Ontario patients, a man in his 80s in Durham Region, is hospitalized.

But information on whether people are self-isolating or hospitalized, their ages and regions, as well as how they were infected, is listed as "pending" for more than half the new cases.

Meanwhile, Elliott announced that following technical difficulties with the Telehealth Ontario line, the province has added an additional 1,300 lines. There are now more than 2,000 lines available at the service.

The provincial legislature passed emergency legislation Thursday aimed at protecting workers who are forced to stay home due to the COVID-19 pandemic.

Premier Doug Ford promised the bill earlier this week and said it applies to employees under investigation, supervision or treatment for the disease caused by the novel coronavirus.

Workers in isolation or in quarantine and those who need to provide care to a person for a reason related to COVID-19, including for a school or daycare closure, will also be protected by the bill. And employees are now exempt from needing to show a doctor's note to get time off.

The measure is retroactive to Jan. 25, 2020 — the date the first presumptive case of COVID-19 was confirmed in the province.

At the news conference with Elliott, Ford said that other measures the province is taking include:

Ford also said he has been in talks with auto manufacturers in Ontario, so that companies may be prepared to switch over their line capacity to produce ventilators should the health-care system run out.

According to Elliott, the province currently has 500 ventilators at the ready in addition to those already in hospitals. 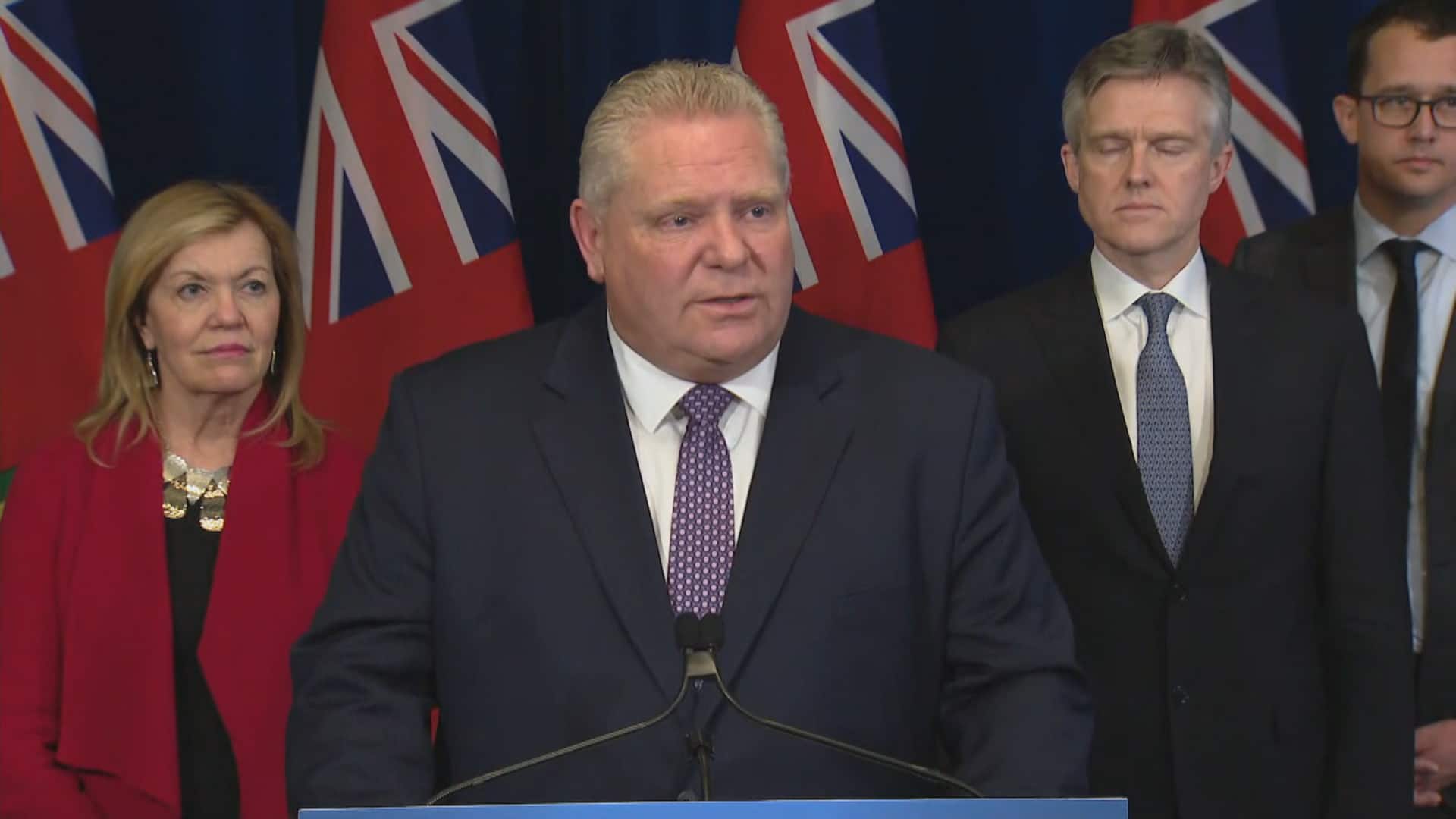 10 months agoVideo
0:56
Premier Doug Ford says the province is not planning to limit the number of people allowed in retail stores at one time for fear that creating lineups outside could contribute to the spread of COVID-19. 0:56

In the name of social distancing, there were only 24 members in the house to pass the emergency legislation: 12 governing PCs, eight New Democrats, two Liberals, one Green and the Speaker.

They were allowed to sit anywhere but had to ensure there was enough space between them for social distancing.

Government house leader Paul Calandra acknowledged the unusual nature of the one-day sitting, but conceded there could be more like it on the horizon as the Progressive Conservative government responds to the evolving situation.

"Like everybody else, I hope that this is resolved very quickly," he said. "But until the medical officer of health tells us otherwise, this could be the new norm for the Ontario legislature for the foreseeable future."

He said the government has taken the unusual step of giving the opposition in-depth briefings and taken some suggestions to amend the legislation.

Calandra said the government will also introduce and expects to pass a second bill to enable municipal councils to meet by teleconference during the pandemic.

NDP Leader Andrea Horwath's party supported the expedited passage of the bill but is disappointed it does not contain more protections for workers.

"Ultimately, the measures being agreed to can only be seen as a small first step," she said in a statement.

"In times like this, politicians must put partisanship aside to unlock support and assistance for people," he said.

In an interview with CBC News Network, Morneau said the government understands the urgency of the situation linked to the novel coronavirus and is leveraging the existing social service system to get money out the door.

The government has waived the one-week wait for employment insurance and announced a series of new measures Wednesday to help Canadians and businesses taking a financial hit from the pandemic.

Meanwhile, Prime Minister Justin Trudeau said at his daily news conference from Ottawa that he expects new restrictions on non-essential travel at the Canada-U.S. border to take effect Friday night, but cautioned that both sides are still fine-tuning the agreement.

Both countries have insisted that trade and key supplies will continue to flow across the border and people who need to cross for essential work will still be able to do so.

Canadian citizens and permanent residents will still be able to get home, although the government says travellers presenting symptoms won't be able to board flights.

Social distancing could be in place for weeks, months: PM

Trudeau also said the unprecedented measures in place now — such as travel restrictions, social distancing protocols and business closures — could continue for some time as political leaders follow the advice of medical experts.

"We've heard anything from weeks to months," he said.

Returning travellers who do not self-isolate are putting everyone at risk, Ontario premier says

10 months agoVideo
0:59
Premier Doug Ford is asking Ontarians returning from abroad to follow self-isolation procedures, saying the province does not have the resources to enforce public health guidance. 0:59

The Toronto Transit Commission, which operates the city's public transit network, reported this morning that one of its workers has tested positive for COVID-19.

According to TTC CEO Rick Leary, the employee works at the agency's Duncan Shop, where buses are repaired and overhauled. The employee went to work on March 11 after returning from travel and was sent home sick. They have not returned to work since, Leary said in a statement.

"Out of an abundance of caution, we have asked all impacted shop employees to self-isolate until March 25, and return to work on March 26 if they have no symptoms," Leary said. The order affects between 130 and 170 people.

The Ministry of Environment, Conservation and Parks says it decided to shutter the parks until April 30 to protect the health of employees and visitors.

Andrew Buttigieg, a spokesman for the parks minister, says staff will post signs at park entrances to notify people about the closures.

He says where possible, park entrances will be gated and buildings locked.

Buttigieg says ministry staff will get in touch people who are in the backcountry or at campgrounds to tell them about the closure.

They're being asked to leave by Thursday.

The closure includes all aspects of the parks, including day-use, car camping and backcountry camping.

"We understand that spending time in nature is important for the health and well-being of Ontarians," Buttigieg said in a written statement on Wednesday.

"However, in order to assist the province to further efforts in keeping employees and Ontarians safe during this time, the ministry made the decision to close provincial parks to the public."

The ministry said campground reservations up to April 30 will be cancelled automatically and a refund will be issued without the typical penalty fine.

A recent survey commissioned by the Tourism Industry Association of Ontario (TIAO) found some accommodation businesses already reporting a threat of massive layoffs and bankruptcy. Hotel reservations have seen an 80 per cent drop while travel operators reported mass cancellations of bookings, the survey found.

"We're hopeful that there will be immediate significant economic support to both small and large operators," said Beth Potter, President and CEO of TIAO. "The announcements from government are encouraging but we need the detail behind the support packages and the implementation plans urgently."

The data for the study was collected between March 12-March 16.

With files from Mike Crawley, Kathleen Harris, Catharine Tunney and The Canadian Press