A 23-year-old woman will be charged with six counts of mischief after she climbed a towering crane early Wednesday in downtown Toronto, requiring emergency services to spend 2½ hours rescuing her during a meticulous operation. Police have identified her as Marisa Lazo.

Police and firefighters were called before 4 a.m. after reports that someone had climbed a crane 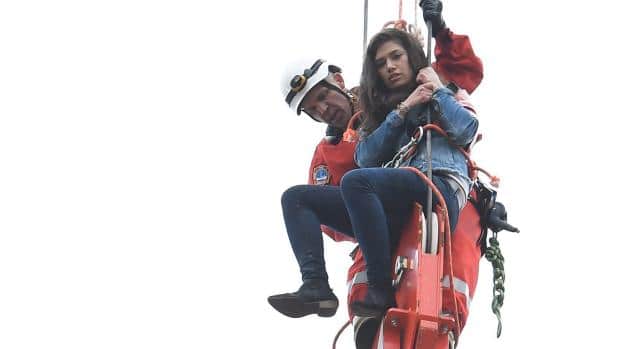 A 23-year-old woman has been charged with six counts of mischief after she climbed a towering crane early Wednesday in downtown Toronto, requiring emergency services to spend 2½ hours rescuing her during a meticulous operation.

Police have identified the Toronto woman as Marisa Lazo. She is scheduled to appear at the Old City Hall courthouse Thursday morning

Toronto police said the mischief charges relate to interfering with property. Lazo was examined at the hospital before being taken to 51 Division. She is set to appear in court Thursday.

Firefighter Rob Wonfor helped lower the woman safely to the ground of a parkette.

The rescue began around 6 a.m. ET — more than two hours after emergency crews first received a call about a woman on the crane.

Police closed Wellesley Street between Church and Yonge streets to aid in the rescue of Lazo.

An ambulance was waiting beside the crane while the firefighter assisted her to the ground. Police officers put her in handcuffs before leading her on foot to an ambulance.

Lazo, who was dressed in jeans, a button-down shirt and a light denim jacket, was placed on a stretcher and covered with a blanket.

Wonfor, an acting captain and 22-year veteran of the Toronto Fire Service, was also checked by paramedics, who checked his core temperature and ensured his vital signs were strong, Chief Matthew Pegg said.

Wonfor later told reporters it "was pretty cold up there," but he had to stay focused on getting through the operation.

The hardest part was the climb up the crane carrying multiple cables, he noted. He said he was "very tired" after the rescue.

"I have no idea how she did it," Wonfor said of Lazo's climb, adding that her boots appeared to have two-inch heels.

"She has to tell me how she did it, because she has to be our new training officer for high-angle [rescue], because it's impressive," he said. "It was hard enough for me to go up with ropes and harnesses and she free-climbed that."

While he has performed many rescue operations over his career, Wonfor said this one was the most dramatic. He noted the Lazo was "very calm" when he got to her, and that helped him remain calm.

Asked whether he would take the rest of the day off, Wonfor said he had to go play goalie in a firefighters' hockey tournament.

Wonfor and a Toronto police emergency task force officer made what platoon Chief Kevin Shaw described as "a slow, tedious" climb up the crane to reach the trapped woman, who apparently climbed the crane and slid down a cable onto the pulley.

The first rescue plan called for an operator to rotate the crane and then lower the pulley to the ground. However, once that got started, the firefighter on the pulley identified a safety concern and that plan was stopped.

"We train for this, and our crews certainly train for this, although we've never seen one quite like this before," Pegg told reporters. "There isn't a textbook, but I think they just wrote it."

Police and firefighters were speaking to Lazo via a loudspeaker throughout the morning, but they could not hear her because she was more than 30 metres in the air.

Police and fire crews said they did not know why Lazo was on the crane.

An image from the scene earlier Wednesday morning showed her sitting on the pulley attached to the crane, and tightly gripping a cable.

Shaw said he was "very surprised" that a civilian "had the nerve" to climb the crane and slide down the cable without gloves.

"Obviously she shouldn't be there," he said.