Community advocates in Toronto say they fear hundreds of people will lose their homes due to an onslaught of evictions that has left residents, who are often essential workers, with little relief.

Community advocates in Toronto say they fear hundreds of people will lose their homes due to an onslaught of evictions that has left residents, who are often essential workers, with little relief.

They say many who are facing eviction or have already been pushed out of their homes have struggled to pay rent during the COVID-19 pandemic due to reduced hours, layoffs or having to stay home with no paid sick days after falling ill.

Advocacy groups are urging the Ontario government to impose a moratorium on evictions as the city is in the midst of a second wave of COVID-19 that has seen the highest case counts Toronto has ever reported.

They are also asking for landlords and tenants to come to agreements they deem as more fair, that won't cause tenants earning minimum wage to plunge into more debt due to owed rent, even as the pandemic subsides.

"Everyday we're contacted by someone in our community who's worried about losing their home," said Chiara Padovani, a member of an organization called the York South-Weston tenant union.

In March, Premier Doug Ford announced at a press conference that the province will "make sure no one gets evicted." But that moratorium on evictions was lifted at the end of August.

By that point, Padovani says an ongoing housing crisis due to COVID-19 had already manifested.

York South-Weston saw 170 eviction hearings in the month of November. This fall, the city said the riding accounted for a disproportionate number of COVID-19 cases compared to other areas in Toronto.

That's because many tenants are front-line workers who are facing higher rates of exposure to the virus and receive lower wages than more affluent parts of the city, said Padovani.

"They're the same people who have been celebrated as front-line workers, as heroes during this pandemic, but aren't given the respect or the rights that they deserve," she said.

WATCH | Why advocates say evictions need to be banned during COVID-19: 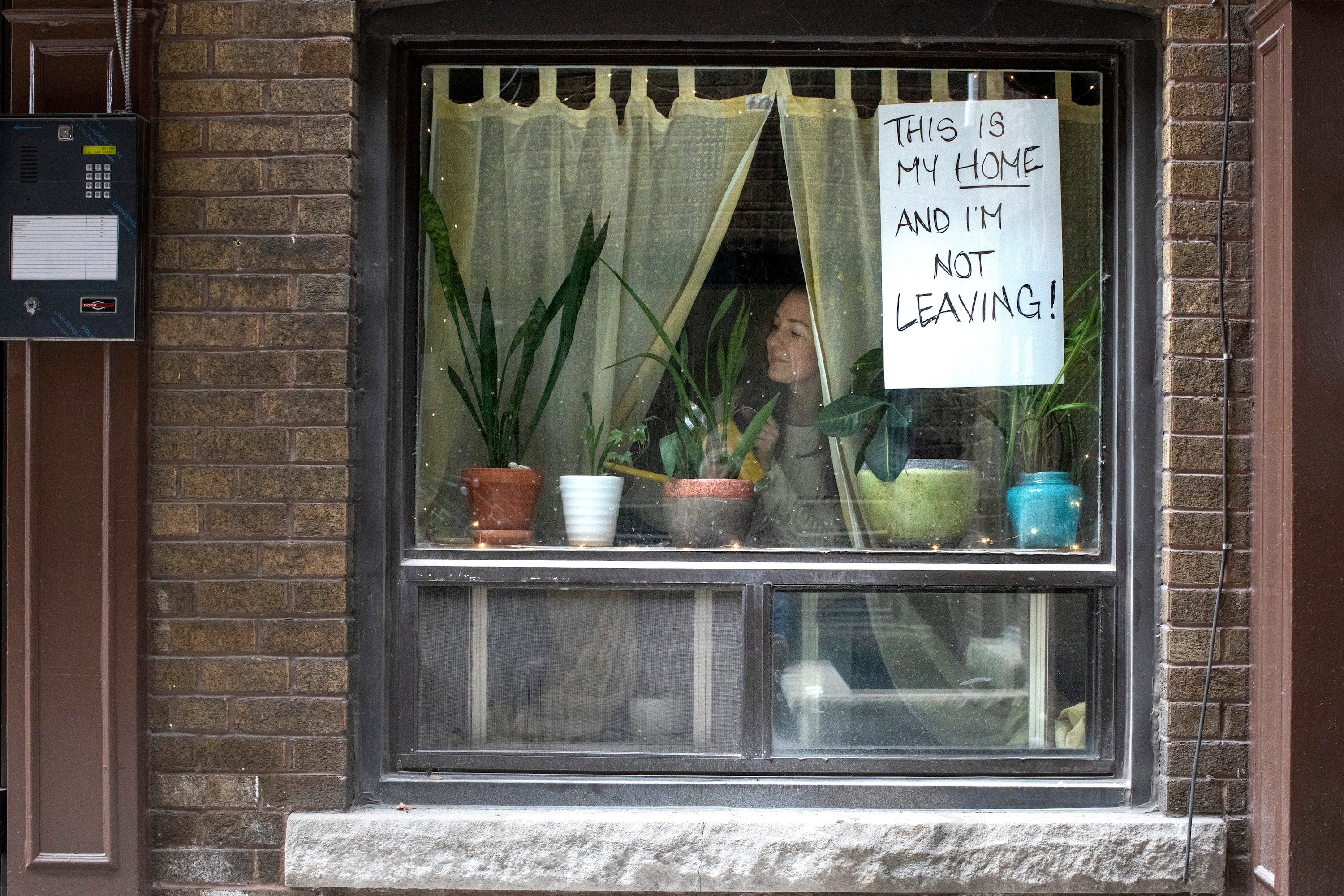 Advocates fear hundreds will soon become homeless as evictions ramp up in Ontario.

3 months ago
2:23
Tenant groups say evictions are on the rise. The province ended its COVID-19-related ban on residential evictions in August, and now the Landlord and Tenant Board has scheduled hundreds of hearings in the next few months. 2:23

Kicking people out of their homes will see them either be forced to live on the streets or crowd in with family members, which are both health risks due to COVID-19, she added.

The Landlord and Tenant Board (LTB) has scheduled thousands of evictions hearings between November and January, said Kenneth Hale, the legal director at the Advocacy Centre for Tenants Ontario.

The centre provides legal help to low-income tenants and resources to those facing eviction.

Hale said that once the eviction ban was lifted, the board began ramping up evictions and slotted in "dozens and dozens" of hearings per day, all done by video conference.

There's been no support for those who don't have proper access to technology — a frequent issue for low-income tenants, he said.

"We've heard of people having to conduct hearings from payphones, and sitting out in their car in the parking lot and wondering whether their minutes were going to run out before they get a chance to present their side of the story," said Hale.

"We're hearing of tenants who've been evicted who didn't even know they had a hearing date because the board sent their notice to the wrong email address, or got caught up in spam filters," she said.

Many have had to drive to access free Wi-Fi from their cars, as they do not have internet at home, she added.

Morrison said the Ontario government seems focused on fast-tracking a backlog of evictions, rather than ensuring those who are most vulnerable to COVID-19 remain housed.

In a statement to CBC Toronto, the Ministry of Municipal Affairs and Housing said that Toronto has received $158 million from the Social Services Relief Fund (SSRF) launched by the province in response to COVID-19.

That flexible funding allows the city to "expand local rent and utility banks, and create long-term housing solutions," the ministry said. The ministry also said they have partnered with the federal government to launch the Canada-Ontario Housing Benefit that has provided direct rental assistance to 5,200 families so far.

Additional legislation was also passed to required the LTB to consider whether landlords attempted to negotiate repayment plans with tenants, before resorting to eviction, the ministry added.

But some of those payment plans are "unbearable" and remain impossible to keep up with for many tenants, said Bryan Doherty, a member of the advocacy group Parkdale Organize.

On Tuesday, Parkdale tenants organized as "solidarity strikers" to withhold their rent until a settlement is reached to ensure their neighbours facing eviction can keep their homes, according to a news release from the group.

Tenants of MetCap, a property company with several buildings across the country, also gave a letter with 400 signatures to management requesting to negotiate a "reasonable settlement." That settlement would include no evictions, no rent increases and rent forgiveness for tenants who are struggling the most.

The hope is to determine a long-term solution, rather than waiting on the government, said Doherty. Residents need the relief as soon as possible, he said.

"They are still reporting for whatever shifts they have available, in long-term care, as personal support workers, as child-care workers," he said. "They have been running on fumes and running out of money for 9 months now ... a reality that should be dealt with now."

With files from Natalie Nanowski