The TTC announced today that Canadian comedian Seth Rogen will appear as a guest voice on some of Toronto's public transit.

It's official. Starting today, TTC users will hear the familiar voice of a famous Canadian comedian telling them how to behave on public transit.

TTC spokesperson Brad Ross announced today that Seth Rogen, who starred in films such as Pineapple Express and Knocked Up, has voiced a series of public service announcements that will begin playing today on Toronto's subway system. Rogen recorded the announcements for free.

"I always grew up taking public transportation, and it just seemed like a way to make people's commutes a little bit more pleasant in some small way," said Rogen in an interview with CBC's Here and Now host Gill Deacon.

Rogen said he was allowed to ad-lib on the PSAs, and sent them back and forth for weeks before they were finalized. In one of the announcements, Rogen instructs TTC commuters on the etiquette of personal grooming on transit — basically, please don't.

"Hey TTC customers, fellow Canadian Seth Rogen here," he says in the announcement. "I can't believe I'm actually going to say this, but stop clipping your fingernails on the TTC. It's gross!" 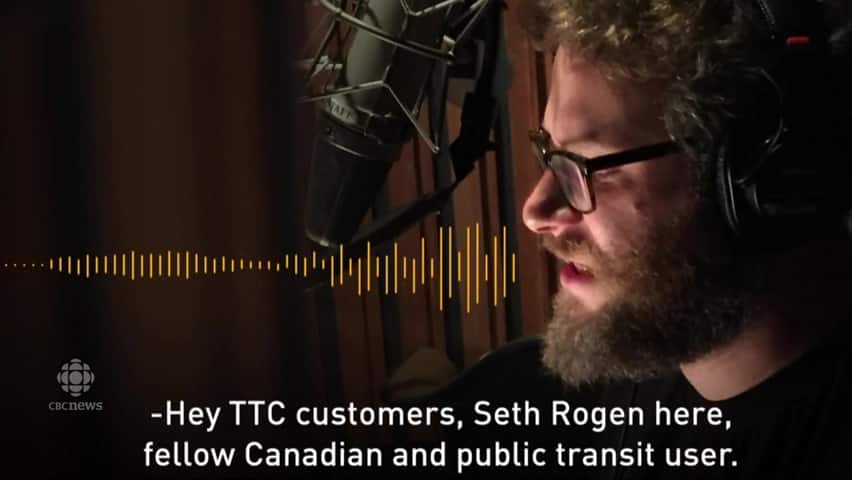 Rogen said he wasn't expecting the need for a message like that.

"I'm surprised enough people clip their toenails on public transportation that we needed to record a message about it," he said.

"That was a little distressing, that this is prevalent enough of a problem that they've enlisted me to help address it."

Yesterday, rumours were circulating in the city about the partnership after Ross tweeted a selfie with Rogen wearing a Bloor-Yonge hat, standing in front of a microphone.

Earlier this week, Vancouver's transit TransLink announced that Rogen, who was born in Vancouver, would be voicing announcements on its transit system.

"I was shocked when they went along with it, honestly," Rogen told CBC News during an interview in Los Angeles Saturday promoting his latest film Like Father.

"But they did go along with it and then I recorded it. And now, you can hear my voice giving you, kind of, etiquette tips."

Speaking with Deacon, Rogen said Vancouver commuters seem to be appreciating the message.

"They seem to be making people's very unpleasant commutes to and from work even one per cent better, and who wouldn't want to do it," he said.