A former professional skateboarder known for his ability to "talk people down" died in double-fatal shooting near Kensington Market early Friday morning while trying to disarm the gunman, his friend told CBC News.

A former professional skateboarder known for his ability to "talk people down" died in double-fatal shooting near Toronto's Kensington Market early Friday morning while trying to disarm the gunman, his friend told CBC News.

Justin Bokma, 42, had been working as a doorman at an after-hours club on College Street when he and a second man were fatally shot, said his friend, Richard Lett.

"He was really good at defusing things and I'm sure that he attempted to defuse the situation," Lett said. "But I guess whoever was pulling the trigger wasn't caring about anyone but themselves."

The shooting happened in what police called an "illegal" lounge above a bar near Augusta Avenue, just a few blocks west of Spadina Avenue.

While police have not released the identity of the victims, both Lett and the Toronto Skateboarding Committee confirmed that Bokma was one of the deceased.

Paramedics and police said one man was pronounced dead inside the club. A second man in his 40s was rushed to hospital with life-threatening injuries and later died, according to police.

It's unclear if any of the victims or shooters knew one another. Police have not said whether it was a targeted shooting.

Bokma knew that his job could be risky, but Lett said that his friend had the demeanour to both calm people down and also to know when to step in.

"And he probably moved toward that when everyone else was running away," Lett said. "I'm sure that there are a few people that are alive today because of his actions, but unfortunately, he's not one of them."

Bokma was close with his family, especially his mother and brother and he was "a proud uncle" to his niece, Lett said. The comedian was not at the after-hours club when the shots rang out, but he said Bokma's family and other friends passed on information to him about the shooting and asked him to speak to media on their behalf.

Tributes to Bokma began pouring in online from skateboarders across the country as the news broke Friday. The Toronto man dominated the local skate scene in the '90s and early 2000s, and later helped other kids learn the sport.

But Lett said he knew Bokma best as a friend who supported him in his work as a stand-up comic and slam poet — and as a recovering addict. When Lett was on the road, his friend would give him a call or send him a message every few days to make sure he knew he was important to someone, the comedian said.

"He was a good man, a great friend," he said. "He was a tall, lanky, goofy guy. Always had a smile on his face, was always there for his mom.

"And he was a hero to all sorts of young skateboarders because he was famous for that earlier in his life."

At least 2 suspects, no arrests

Police have not yet released any information about the suspects in the shooting and they are still investigating whether a fourth man was injured.

Homicide Det. Shawn Mahoney said that it's too early for suspect descriptions, but he believes investigators are looking for two to three armed men who fled the scene on foot.

Mahoney said at least 30 people were at the party when shots were fired and urged witnesses to come forward and speak to police. 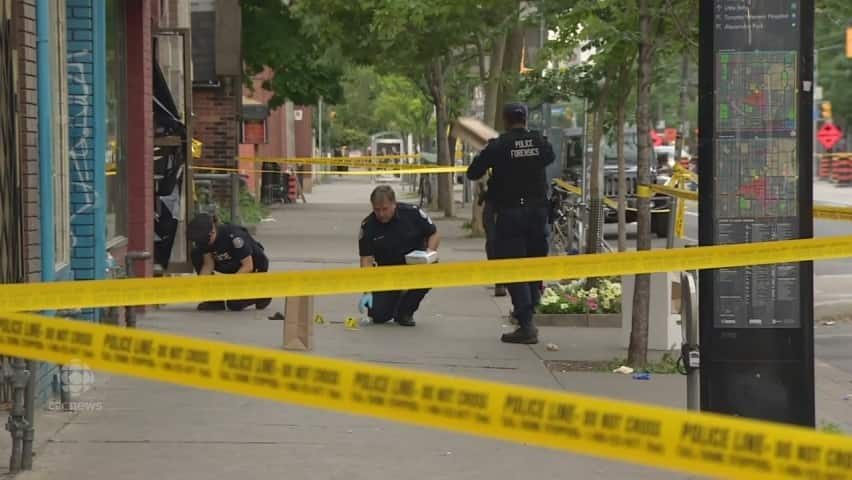 5 years agoVideo
0:49
Two men are dead and one other is in serious condition after a shooting at an after-hours club near Kensington Market Friday morning. 0:49
CBC's Journalistic Standards and Practices|About CBC News
now